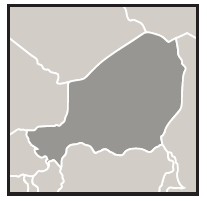 Niger has faced three IED attacks between 2011 and 2015. These killed and injured 75 people, of which 34 were civilians. Two attacks occurred in 2013, both perpetrated by MUJAO. In 2015 the only IED attack was committed by Boko Haram. Currently, the main threat of IEDs in Niger stems from Boko Haram who has increasingly mounted terrorist attacks in the country, crossing the border from Nigeria. Niger also faces the threat from attacks by militant groups from Libya and Mali.

Niger has been working to increase their C-IED and counterterrorism capacity, particularly in the areas of border security and intelligence. However, a lack of resources and basic utensils such as electricity, communications equipment, vehicles and personnel, constrain Niger’s development in this and other areas. It produces a lack of resources, coordination and overall effectiveness.

The Central Service for the Fight Against Terrorism (known by its French acronym SCLCT) is made up of law enforcement personnel from Niger’s main policing entities: the National Police, the National Guard, and the Gendarmerie. The SCLCT is the main actor in Niger responsible for counterterrorism investigations. The SCLCT facilitates greater information sharing between the three branches of law enforcement in Niger on counterterrorism issues.

Improving border security has been a priority for Niger. Particularly along northern borders with Algeria, Libya, and Mali, which are often utilised for smuggling arms, explosives and drugs. This has seen an increase in Niger’s border control facilities and cooperation with bordering nations. At border checkpoints, terrorist watch-lists are used, and these are also circulated with other security services to improve coordination across all Niger’s state security actors. However, the lack of funding has seen these border facilities ill-equipped to carry out the ideal level of checks, such as biometric and biographic screening.

Efforts to counter violent extremism saw Nigerien government proliferate messages of tolerance and peace through social media, education, and religious leaders, as well as the rehabilitation and reintegration of prisoners incarcerating for violent extremism.

Niger has engaged in an initiative with Chad and Libya in order to form a tripartite border commission as part of their counterterrorism efforts and to increase to cooperation to provide effective national security for each state.

The US has also provided assistance to Niger, who has cooperatively worked to improve national security through the US’ Security Governance Initiative. Niger has also been engaged in the US ATA programme to help improve their counterterrorism ability. US troops have been involving with the training of Niger’s local forces to better prepare them for fighting Islamist militants. The US has also donated two US military aircrafts to Niger.

Canada has played a significant role in assisting Niger in developing their border security management and building the capacity of the armed forces to manage terrorist threats. These initiatives have included the provision of training to improve counter terrorism abilities.

French forces are based in Niamey to assist counterterrorism efforts, including through ground operations, as well as air surveillance.

Niger has provided assistance to combat AQIM in Mali, alongside other regional forces.

Niger is a member of GIABA, which was established in 1999 to fight money laundering. At the beginning of 2006, GIABA’s mandate was expanded to cover counter terrorism financing. Countering terrorism financing is particularly significant in Niger, whose borders are known to facilitate the smuggling of large sums of money. However, Niger has charged many with terrorism financing and made efforts to combat its continuation. Improved border security has contributed to this.

As part of the Sahel-Sahara Development and Security Strategy (SDSS), a regional initiative supported by USAID’s Peace through Development II program, Niger strengthened moderate voices and helped counter violent extremism. The programme encouraged the use of radio, social media, education and religion to promote tolerance and dialogue as part of the attempts to counteract the dissemination of extremist voices.

As part of Niger’s commitment to combat Boko Haram, Niger cooperates with the Lake Chad Basin Commission and hosted many meetings on the subject. Niger is also part of the Multinational Joint Task Force (MNJTF) to tackle Boko Haram, to whom it cooperates with in operations and provides troops to.

The GCTF Sahel Capacity-Building Working Group has seen increased attention to border security, as requested by Niger and other Sahel states. Discussions have focused on the challenges and good practice of border security and customs.

Niger is also part of the Trans-Sahara Counterterrorism Partnership.

Spirit of America is a relatively small American NGO that has operated in Niger since 2015. They have provided many items of non-lethal equipment to Niger in their fight against Boko Haram, including metal detectors.

Additionally, they funded a community-level counter Boko Haram summit in Diffa, southern Niger. The summit was conducted in cooperation with the US unit and the Nigerien military and focused on stopping the flow of recruits to help the militant group to counter radicalisation and recruitment. They also looked at how to better police village borders.

Currently, they are looking to fund equipment purchases for the Action Civil-Militaire (ACM) unit that empowers local leaders and has developed early warning systems, but are under-resourced.