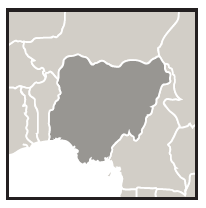 The Nigerian Armed Forces (NAF) is the combined military forces of Nigeria. The largest portion of the NAF is the Nigerian Army. According to Global Fire Power, the NAF has approximately 130,000 active front-line personnel. The NAF are currently engaged in ongoing counter-insurgency efforts against Boko Haram, an Islamist group known for grisly tactics targeting civilians. As previously noted by AOAV, Boko Haram’s suicide bombings and IEDs are the most lethal in the world in terms of deaths and injuries per attack. This puts the NAF on the front line of a serious IED conflict, a challenge it previously faced during the secessionist Biafra Conflict in the 1980s.

The NAF have an experienced bomb disposal unit which deals with C-IED operations in a military context. However, in general, the campaign against Boko Haram has been dogged by corruption and mismanagement. The most high-profile corruption case saw former National Security Advisor Sambo Dusuki accused of awarding up to $2 million in false contracts, leaving Nigerian troops lacking the correct equipment to engage Boko Haram.

Though the NAF play an important role in responding to IED threats in Nigeria, due to the threat the police also have designated EOD teams which respond to local threats. The Nigerian Police Force have received C-IED training from abroad in order to increase police capabilities at tackling the high IED threat that persists in Nigeria. The training was part of a wider counter-terrorism initiative to combat Boko Haram. Most of the training they have received on C-IED has been provided by the United States or by US-funded bodies.

As well as those briefly mentioned above, the Nigerian government has received considerable assistance from international bodies, including from the US Anti-Terrorism Assistance (ATA) programme. Most of the US-backed efforts to counter the IED threat are inseparable from a broader counter-terrorism campaign, including CVE (Countering Violent Extremism) programmes and attempts to deal with the underlying problems motivating the rise of insurgent groups, such as corruption and the weakness of civil society.

However, the NAF itself has not received enormous amounts of foreign training or assistance, perhaps because the NAF have been accused of various human rights abuses during the conflict, deterring those who might otherwise provide military aid.  In 2014, however, a Congressional Research Service Report asserted that $5 million in aid was being directed by the US to the NAF in the form of military-civilian relations and C-IED training, an increase from the previous year. In one publicised incident, a US bomb squad supervisor volunteered to provide C-IED training to Nigerian police during a visit on an unrelated mission. Other countries, including the UK, are also providing C-IED training to the NAF.

Attempts to improve the NAF’s counterterrorism abilities have included the establishment of the Nigerian Army Information Processing Center, an open-source database institution that encourages the rapid reporting and analysis of terrorist activity as well as the anonymous reporting of NAF abuses. According to the same source, they have also begun to equip themselves with balloon-based reconnaissance platforms and electronic sensors termed TM-1s which supposedly have the ability to detect human-borne IEDs from a distance of 500 metres.

Nigeria is also part of TSCTP, which provides C-IED training to civil law enforcement as well as military personnel alongside other partner nations, such as Chad and Cameroon, who are also involved in the fight against Boko Haram. The training police have received has also targeted counter-terrorism financing, with the aim of better restricting Boko Haram’s ability to raise and store money. 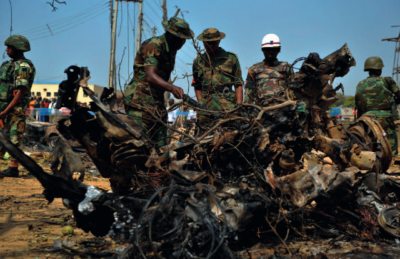 Nigeria also participates as a member of GIABA to assist their impact in tackling money-laundering and terrorism financing. This is particularly important in Nigeria, as the country faces a high risk from these crimes. It is likely that Boko Haram had been easily able to abuse Nigeria’s unexceptional monitoring system of terrorism financing, but Nigeria have been commended by GIABA for the significant steps they have taken already. One of these steps was the Anti-Terrorism Act; the implementation of which was seen to signify a turning point with the enactment of strong counterterrorism measures, which is required for effective counterterrorism financing.

In recognition of the significant efforts Nigeria has made, GIABA recommended Nigeria for membership of the Financial Action Task Force (FATF) – the only other African state to gain membership is South Africa which makes Nigeria the second African state to register for FATF membership. GIABA has been providing technical and other support to Nigeria and is ready to sustain and create further training programmes in areas such as asset recovery, asset forfeiture, the tracking and monitoring of stolen funds, money laundering and terrorists financing activities in Nigeria.

Nigeria is also engaged in a regional military initiative to combat Boko Haram. The MNJTF has seen Nigeria, Niger, Benin, Chad and Cameroon unify their efforts, to create a 9,000 strong force, with the specific aim of bringing an end to the Boko Haram insurgency. This has significantly aided Nigeria’s efforts to combat the Boko Haram group, who have caused the most devastation in Nigeria. Assistance from Nigeria’s neighbours has enabled the group to be tackled in a way the was not previous before MNJTF’s creation, as Boko Haram moved across borders to regroup, recruit, fund, prepare and carry out attacks.

The DDG have delivered emergency mine/ERW risk education, particularly targeting IDPs in highly affected areas. This work began in October 2015 and now covers high-risk areas in Adamawa state and Borno state; the DDG were hoping to expand their operations into Yobe state in late 2016. Other aims that DDG hope to achieve in Nigeria include carrying out IED risk assessments as well as developing risk education materials and strategies aimed at IDPs and humanitarian workers.

Nigeria participated in the training provided by MKDS, who specialise in delivering counterterrorism solutions, consultancy, operational support and training to the Ghana Armed Forces Command and Staff College (GAFCSC). The training was comprised of seminars, an exhibition, demonstrations, and importantly an IEDD / Render Safe exercise, and a one-day Security and Counter-Terrorism in Africa Conference on December 12, featuring high level speakers.

Vox Peccavi is a consultancy that appears to post updates on IED attacks throughout Nigeria. It also offers advice on IEDs that appears to be aimed at local communities, as it details ways to try and ensure individual safety in an area that is at high risk of an IED attack. The high-threat level of the area target may be due to the region in general or due to a particular event that increases IED risk. This advice too remains aimed at those living in Nigeria or other areas of West Africa.

Vox Peccavi also explores the tactics behind the use of the IEDs by groups that operate in West Africa, such as Boko Haram. Vox Paccavi’s reports have examined where the groups might get their resources to build IEDs and find safe/hospitable places to build them.

The CJTF are a paramilitary vigilante group in northeast Nigeria that was formed in 2013. They currently boast 26,000 members, of which most are volunteers. The CJTF have the express aim of defeating Boko Haram.

The vigilante group gained attention for their quick response to IED threats that Boko Haram presents. Members of the CJTF have been known to intercept suicide bombers, killing them before they detonate their explosives or ensuring that the only people they kill are themselves. This work has meant suicide bombers are being stopped before civilians are harmed.

The CJTF are working in cooperation with the Nigerian Army. They have taken responsibility for manning check-points, such as at camp entrances. Many of the members have been victims or witnesses to Boko Haram’s crime and the residents of Maiduguri, the capital of Borno State, are said to be grateful for the protection the CJTF offer. Some of the CJTF have now been trained by the military and receive some wages for their work but hold the same positions as other members. Like the NAF there have also been allegations of human rights abuses levelled at the CJTF.

Though the CJTF represent a very differently type of C-IED civil society organisation, they are said to have been instrumental in stopping the threat of bombs in Borno State. They represent the increasing need in areas where the threat of IED attacks is so high, for action and cooperation to decrease the threat they pose to civilians.