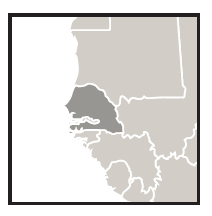 Senegal has little threat from IED attacks given the country’s previous lack of experience with one. However, Senegal is in the region where such attacks are common and Senegal itself shares a border with Mali. Senegal is also active in neighbouring countries and in counterterrorism operations, which makes it a more appealing target to militants. Therefore, Senegal must remain vigilant, and be ready for such threats and more secure in the knowledge that they know what to do.

Senegal is fortunate not to suffer from high-levels of extremist violence in general. Religious followers and preachers are moderate in their belief and encourage tolerance. Religious entities are supported by the government if they require assistance in preventing extremism.

The National Police are the main counterterrorism enforcers in Senegal, with the assistance of the gendarmerie. The police carry out investigations for terrorism related crimes, as well as everyday counterterrorism activities such as stop and searches, and surveillance. The counterterrorism unit of the national intelligence services assists with surveillance and investigations. The police have an anti-terrorist unit, designed to respond to terrorism incidents and capture terrorists. Police presence in public areas has also been increased to provide greater security in these areas.

Customs and border security, for which the police are responsible, lack the resources and cooperation with neighbours and partners needed to fulfil terrorism prevention tasks to the required standard. This is especially a problem at the borders to the south and east. Border security has been a focus of training efforts.

All the law enforcement organisations are said to lack the capacity needed to adequately carry out C-IED initiatives. Coordination between the various enforcers of counterterrorism in the country is also absent. The issue stems from the poverty prevalent throughout Senegal.

Another significant problem that might effect IED use in Senegal is the high contamination of landmines that the government in recent years avoided doing anything about. Many NGOs and international organisations withdrew their support for humanitarian demining in Senegal in December 2015 due to the lack of government cooperation. Mechem deminers have also been kidnapped by a faction of the Movement of Democratic Forces of Casamance, one of the rebel factions in Senegal, in 2013. However, in 2016 demining activities resumed with the particular assistance of Handicap International.

In 2016 Senegal participated in the annual “Flintlock” exercise, which saw more than 1,700 military personnel take part across Senegal and Mauritania. The exercises focus on counterterrorism and involved C-IED training. Senegal police, gendarmes, lawyers and judges have been trained in post-blast procedure and investigations.

In July of this year, the Senegalese Armed Forces and the US Army Africa took part in a two-week joint training in Theis, Senegal, as part of the Africa Readiness Training program. The training included IED detection alongside a variety of other realistic training. This exercise not only increases the capacity of the Senegalese Forces but also those of the US who must adapt to the Africa’s environment and tactics.

The US has also enhanced Senegal’s demining capability though a train-the-trainer program, which began in 2014. This saw engineers within the army taught how to safely detect and move explosive ordnance. The veterans taught have begun teaching further students from the lesson learnt.

As well as cooperation with the US, Senegal has also received assistance in the form of training and funding from French forces, particularly for police response. France has planned to invest a further $47 million to African Sahel countries for counterterrorism training and equipment. Though Senegal is unlikely to be considered a priority in the region, they will see efforts there too.

In 2015, Senegal hosted the GCTF’s Sahel Regional Capacity Building Working Group meeting. Senegal are looking to increase their border capabilities through cooperation with the GCTF’s Border Security Initiative, as well as similar programmes run by other organisations such as the AU.

Senegal provides troops and assistance to the MINUSMA operation in Mali. MISUSMA forces face a significant threat from IEDs in Mali. Many of the states supporting the MINUSMA operation lacked C-IED training. Training has been provided by NATO agencies, and UNMAS has provided threat mitigation services to MINUSMA which also helps to reduce the civilian harm from IEDs. Senegalese forces are also assisting in peacekeeping forces in MINUSC, MINUSTAH, MONUSCO, UNAMID, UNMISS, and UNOCI.

Senegal has engaged in INTERPOL training provided to states in West Africa to improve border management.  The exercise in 2016, focused on enhancing interagency collaboration. To encourage greater cooperation, other agencies such as GIABA, immigration services, trafficking units and other law enforcement agencies also provided training, to improve awareness and foster good relations between the agencies within the states participating.

The GICHD has assisted Senegal’s demining centre, focusing on programme and information management. They have supported demining personnel in Senegal through the provision of training and provided workshops on how to conduct MRE programmes. Furthermore, they have supported Senegal to develop National Mine Action Standards.

Handicap International has been clearing mines and UXOs from Casamance throughout 2016. They had previously carried out land clearance three years ago. In 2016, they planned to clear 55,000m2. They are also assisting the Senegalese Association of Mine Victims in providing MRE in the same area. 60 schools and 65 villages will be the target of the education as they hope to reach children most importantly due their curiosity and inexperience that makes them more vulnerable. Pax Mondial provided several mine detection dogs to Handicap International to aid their efforts.