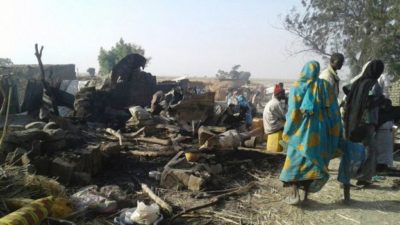 Yesterday, January 17th 2017, the Nigerian Air Force mistakenly bombed an encampment for the displaced in Rann, Borno. The air strike killed at least 52 and injured more than 200.

Some news agencies report that as many as 100 refugees had been killed.

Both the International Red Cross (ICRC) and Médecins Sans Frontières (MSF) reported deaths and injuries among their workers at the camp.

Though the military were aware of the presence of the camp and the aid workers, they hit the camp with the intention of killing Boko Haram ‘remnants’. Aid organisation are now engaging with the Nigerian military to understand how such a mistake happened and to prevent future occurrences.

Yesterday’s bombardment has killed and injured more civilians than all aerial bombardment that has taken place in Nigeria in the last five years.

In February 2014, an air strike on a village in Daglun killed 20 and injured 25, though the military was, at the time, unaware of any civilians being killed in an airstrike.

In 2016, almost all civilian deaths and injuries were the result of IEDs. The popular weapon of the Boko Haram militants. 88% were killed or injured by suicide attacks.

Whilst there were still over 500 civilian death and injuries from explosive violence in 2016, this represents an 83% decrease from the previous year.

AOAV records casualties (i.e. people killed and injured) from explosive violence around the world as reported in English-language news sources.

AOAV strongly condemns the use of violence against civilians and the use of explosive weapons in populated areas. States are encouraged to refrain from using such weapons where there is likely to be a high concentration of civilians.