For the third year in a row, the number of people displaced around the world has increased, with 65.6 million forcibly displaced by persecution, conflict, violence or human rights violations in 2016 – an increase of 300,000 compared to the previous year. 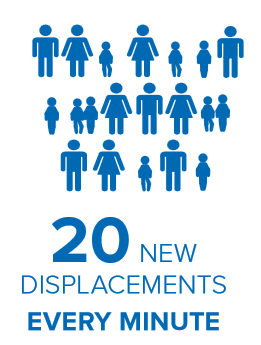 The latest annual, Global Trends report on displacement from the UN refugee agency (UNHCR) found that every three seconds someone was forced to flee their home.

Whilst the majority of the displaced (40.3 million) remained inside the borders of their country, 22.5 million were refugees. The majority of which came from Syria, Afghanistan and South Sudan.

It remained the case that many of the states producing the most displaced, including refugees, were also amongst those Action on Armed Violence (AOAV) found to be most impacted by explosive violence.

AOAV’s recent study, The Refugee Explosion, found that 85% of refugees and asylum seekers interviewed across Europe had witnessed explosive violence.

Explosive violence remains an essential catalyst to the displacement of civilians. Last year, Syria saw, by far, the most civilian deaths and injuries from explosive violence around the globe. 73% of all incidents recorded took place in populated areas, responsible for 89% of civilian casualties. It comes therefore, as no surprise that the single biggest source of refugees was the conflict in Syria, with 824,000 newly-recognised refugees fleeing Syria last year and 5.5 million refugees in total. More than half the Syrian population lived in displacement in 2016.

552,000 refugees were returned to their countries of origin in 2016, ‘often in less than ideal conditions’. 384,000 of these were those returned to Afghanistan, despite continuing conflict and violence. In fact, of the Afghan refugees and asylum seekers interviewed across Europe, 92% had been directly impacted by explosive violence.

The Global Trends report also found that 84% of the world’s refugees were hosted in developing regions, increasing political and economic strains. Whilst there are some countries in developing regions which are taking in significant numbers of refugees, such as Germany and Sweden, others do little to assist. despite being in a relatively easier position to do so. Many of these countries doing little also contribute to some of the significant causes of displacement through explosive violence and arms sales.

AOAV calls on States and other actors to politically commit to refraining from using explosive weapons with wide area effects in populated areas. Further, more should be done to evenly distribute refugees, reducing the burden on developing nations.