Home / The impact of violence / Refugees and violence

In the first research of its kind, Action on Armed Violence (AOAV) has set out to examine the impact of explosive violence on the refugee crisis in Europe.

Interviewing over 250 refugees in the UK Germany, and Greece, AOAV found in The Refugee Explosion, that 85% of those interviewed had witnessed explosive violence. In total, some 69% had witnessed shelling, 61% airstrikes, 58% Improvised Explosive Device (IED) attacks and 39% suicide attacks. 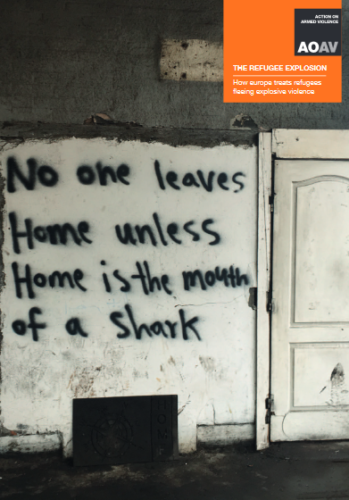 Of those refugees questioned from Afghanistan, 92% had been directly impacted by explosive violence, and from Iraq 90% had been affected.

The findings are in line with other research AOAV has done. Since 2011, it has recorded 233,949 deaths and injuries from explosive violence from English-language news sources. 76% of these were civilians and when explosive weapons were used in populated areas, 92% of those killed or injured were civilians. Such levels of harm have had consequences – over the same amount of time Europe has seen over 4 million asylum applicants.

It is clear that the often-overwhelming numbers of refugees coming into Europe are largely doing so because they are fleeing explosive violence, and that this fact has not been fully realised by many European governments.

AOAV campaigns as part of the International Network of Explosive Weapons (INEW) to encourage States to sign up to political commitment not to use explosive violence in towns and cities.

Key findings of The Refugee Explosion

Iain Overton, Action on Armed Violence’s Executive Director, said of the report: ‘Our findings show that the refugee crisis in Europe has been categorically fuelled by explosive violence, but that States and some sections of the media are not making this connection.  From a failure to provide basic psychological help for those suffering trauma, to columnists not making the crucial difference between refugees and economic migrants, it is clear that the cause and the effect of explosive violence is not being made.

When more refugees in the UK have been granted leave to remain from Albania than from Iraq, it is clear that the British Government are ignoring the very real impact that explosive weapons have had on refugees the world over. Instead, the UK carries on selling weapons to Saudi Arabia and beyond, weapons that in turn cause refugees that seek to come to Europe. And the terribly irony of that isn’t realised by those in power.”

– Action on Armed Violence (AOAV) is a London based charity.  It has a central mission: to carry out research and advocacy in order to reduce the incidence and impact of global armed violence.

– Of the 259 refugees and asylum seekers who AOAV spoke to, 128 were from Syria, 60 from Afghanistan, 31 from Iraq, nine from Nigeria, eight from Pakistan, six from Iran, two from Bangladesh, Sri Lanka, Eritrea, and Egypt, and one from Senegal, El Salvador, Serbia, Uganda, India, Palestine, Yemen, Mali, and Morocco.

The whole report, The Refugee Explosion, can be found here. Whilst the report introduction and methodology can be seen here. The key findings can be viewed here. The report overview of explosive violence and refugees can be read here, as well as on refugee destinations, here, asylum law in Europe, here, and political and economic developments, here.  AOAV’s country findings for Germany, the UK, and Greece can be found here, here, and here, respectively. For the report’s overall findings please click here, or for AOAV’s resulting recommendations here. To read some of the interviews from refugees AOAV spoke to please see here. A video illustrating the key findings can be found here.