This article is part of AOAV’s report, The Refugee Explosion. The whole report can be found here. Whilst key findings can be viewed here. The report overview of explosive violence and refugees can be read here, as well as on refugee destinations, here, asylum law in Europe, here, and political and economic developments, here.  AOAV’s country findings for Germany, the UK, and Greece can be found here, here, and here, respectively. For the report’s overall findings please click here, or for AOAV’s resulting recommendations here. To read some of the interviews from refugees AOAV spoke to please see here. A video illustrating the key findings can be found here.


In recent years, the rising use of explosive weapons in conflict zones around the world – particularly in those wars that have brought misery to vast swathes of the Middle East and Africa – has destroyed urban landscapes, terrorised populations and driven scores of people from their homes. This is, sadly, of little surprise.

As AOAV has repeatedly shown, over 90% of those who are killed or injured when explosive weapons are used in populated areas, are civilians. Many of those who survive the barrage of explosive violence, remain displaced within their own countries, whilst others have been forced to flee bombs and bullets by crossing international borders, to seek asylum or humanitarian protection elsewhere.

While the global impact of explosive violence is relatively well known, what has been less the subject of debate is how that impact has caused refugees the world over.

At the end of 2015, the United Nations High Commission for Refugees (UNHCR) reported that a record total of 65.3 million people had been forcibly displaced worldwide, representing an increase of 5.8 million over the previous year. This total includes 21.3 million refugees in addition to another 40.8 million internally displaced persons. It means that one in every 113 people on earth has been displaced.

AOAV has been recording the impact of explosive violence since 2011. Since then, AOAV has recorded a consistent increase in civilian harm from such weaponry – between 2011 and 2015, year on year civilian deaths and injuries from explosive violence rose by some 54%. Hand in hand with this increase in explosive violence, Europe has seen what has been termed a ‘refugee/migrant crisis’, the massive displacement of millions of civilians due to conflicts, primarily from the Middle East and Africa. 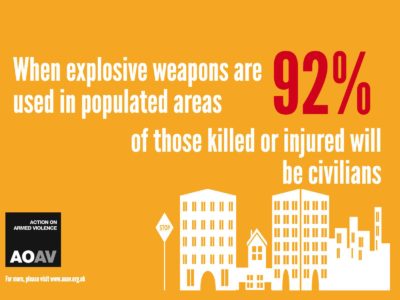 The International Network on Explosive Weapons (INEW) – of which AOAV is a founding member – has stated that bombing in towns and cities is likely to be a ‘significant factor in the current unprecedented levels of mass displacement caused by conflict, both within and between countries.’ This strongly suggests that the rising incidence of explosive violence in the Middle East has been a key driver of the refugee crisis that has engulfed Europe from the summer of 2015 onwards.

This report – The Refugee Explosion – sets out to examine the links between explosive violence and the mass influx of refugees into Europe, as well as to look at the impact this has had on EU nations, and to understand what protection and support in Europe is offered to those particularly fleeing explosive violence.

Three case study countries – Germany, the UK, and Greece – are explored in greater detail. The choice of these countries was made based on the variety of situations relating to refugees that they presented. Germany has opened its borders and provided generous refuge to the greatest number of applicants. In comparison, the UK has taken on significantly fewer refugees and, at the same time, has seen anti-immigration and anti-EU sentiment rise in recent years.

Greece has had little choice in its role in the crisis – due to its location it has been the arrival destination for thousands of refugees fleeing the Middle East and North Africa, and at times has been overwhelmed by this reality.

For this report, AOAV spoke to over 250 refugees/asylum seekers across the three case studies – Germany, Greece and the UK. The research took place between October 2016 and February 2017 and consisted of:

The questions asked refugees what violence, if any, they had witnessed. In order to prevent innate bias in self-reporting, those questioned had the options of choosing any or none of a variety of weapon types including gunfire, or explaining the type of violence they had witnessed under the title ‘other’. Some used this choice to explain they were subject to police violence or torture.

Of the 259 refugees and asylum seekers who AOAV spoke to 128 were from Syria, 60 from Afghanistan, 31 from Iraq, nine from Nigeria, eight from Pakistan, six from Iran, two from Bangladesh, Sri Lanka, Eritrea, and Egypt, and one from Senegal, El Salvador, Serbia, Uganda, India, Palestine, Yemen, Mali, and Morocco.

AOAV corroborated the stories of the refugees where they could. However, for the most part, asylum seekers and refugees were trusted on their word. AOAV explained to those who filled in the questionnaire that they were anonymous, their answers could in no way be associated with them as individuals, and in the case of asylum seekers, the answers would have no bearing on the asylum process. 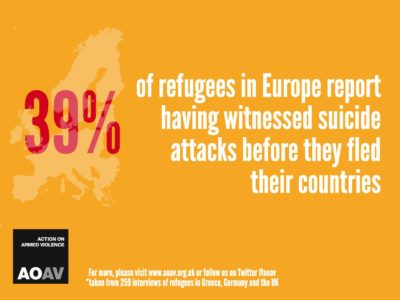 Some readers of this report may express concerns about the validity of the claims made by the refugees and asylum seekers that AOAV spoke to. Whilst we note this concern we feel that the anonymity of the questionnaires, the fact that we stressed their responses would have no impact on their asylum process, and the open-questions offered in our questionnaires meant that, where possible, we tried to prevent bias or situations whereby people answered in a way they thought we wanted them to.

We told the refugees answering the questionnaires that AOAV were doing a report on how refugees were treated in Europe, and did not stress that AOAV’s interest lay in the impact of explosive violence on refugees and the processes they go through.

Explosive violence: Explosive violence refers to the use of explosive weapons in armed violence. It includes, but is not limited to, the use of: air strikes, air-dropped bombs, missiles, rockets, shelling, artillery shells, mortars, tank shells, grenades, and IEDs.

IDP: An internally displaced person is someone who is forced to flee their home but they remain within their own country’s borders.

Refugees: The use of refugees within the report is complex – in the field research it describes those who self-describe as refugees which may include those who are still seeking asylum. However, where it is referred to in the context of laws and policy, the term identifies those who have been granted asylum.

Asylum seekers: Asylum seekers are those who are seeking refuge in a state that is not the country of origin.

Air strike: Broadly speaking, this term is used to refer to incidents where explosive weapons have been air-launched without specifying the munition used.

Shelling: Is used to refer to reports of the use of explosive ground-launched shells including mortars, rockets, artillery, or tank shells.

IEDs: Improvised explosive devices. In the questionnaire types of IEDs were limited to car bombs (including those using trucks), suicide attacks, and roadside bombs.