This article is part of AOAV’s report, The Refugee Explosion. The whole report can be found here. Whilst the report introduction and methodology can be seen here. The key findings can be viewed here. The report overview of explosive violence and refugees can be read here, as well as on refugee destinations, here, and political and economic developments, here.  AOAV’s country findings for Germany, the UK, and Greece can be found here, here, and here, respectively. For the report’s overall findings please click here, or for AOAV’s resulting recommendations here. To read some of the interviews from refugees AOAV spoke to please see here.

The 1951 Refugee Convention – formally known as the UN Convention relating to the Status of Refugees – is grounded in Article 14 of the 1948 Universal Declaration of Human Rights, which recognises the right of persons to seek asylum from persecution in other countries.

Six decades on, the Refugee Convention remains the centrepiece of international refugee protection, and is the key reference document that guides the refugee policies of signatory states. It has seen only one amendment, the 1967 Protocol, which removed the geographic limitations, giving the Convention universal coverage.

The Refugee Convention defines a refugee as someone who, ‘owing to a well-founded fear of being persecuted for reasons of race, religion, nationality, membership of a particular social group or political opinion, is outside the country of his nationality and is unable to or, owing to such fear, is unwilling to avail himself to the protection of that country.’ The Convention states that such persons should be granted refugee status, and should not be returned to their country of origin. However, the declaration is not legally binding and it remains up to the host country to decide whether or not they will grant asylum.

This definition takes the identity, beliefs and circumstances of the asylum-seeker into account, as the Convention was written shortly after World War II and in the context of fascist and communist persecutions. 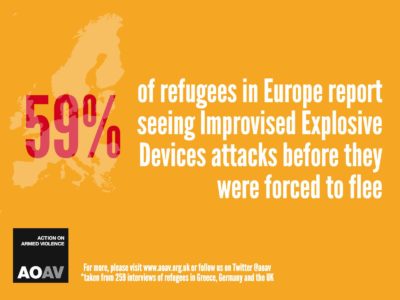 However, modern warfare and present reasons for displacement differ significantly from the situation of the mid-twentieth century. From the Refugee Convention alone it would appear that explosive violence that is used indiscriminately is not considered under the 1951 Refugee Convention, as the definition is based on an individual threat.

However, as the cause of refugee movements has changed, the law has tried to adapt. Efforts to address this include the concept of complementary protection, which is based on a state’s human rights obligations rather than under the Refugee Convention. While there is no universally accepted definition of complimentary protection, it is generally considered that complementary protection attempts to ensure protection to those who fall outside the 1951 refugee definition, through extending the principle of non-refoulement – the obligation not to return an individual to a place where they will suffer serious harm.

This is particularly applied to those fleeing conflict, civil war and generalised violence. These concerns have also been addressed by the UNHCR as they encourage states to widen the parameters of what may be defined as ‘persecution’ and an ‘individual’ threat. The most recent guidance on refugee status and armed conflict, Guidelines on International Protection No. 12, released by the UNHCR in December 2016, attempts to provide clarity on how armed conflict and violence are considered within the international legal framework.

The guidelines clarify that entire groups or populations may be at risk of persecution, which leaves each member at risk. An individual must just prove their fear of being persecuted is well-founded. The guidelines specifies that where communities are at risk from explosive violence as well as other forms of indiscriminate violence amount to persecution under Article 1A(2) of the Refugee Convention.

The December 2016 guidelines of asylum and armed conflict explain that only when the armed conflict and violence and its impacts are geographically limited and confined to a specific part of the country would it be relevant to assess whether an internal flight or relocation alternative exists. In conflicts such as Syria, Iraq and Afghanistan, it is clear this is often not the case.

However, it remains that there is an absence of a binding international agreement on complementary protection, and therefore it remains largely at the discretion of state decision- makers. 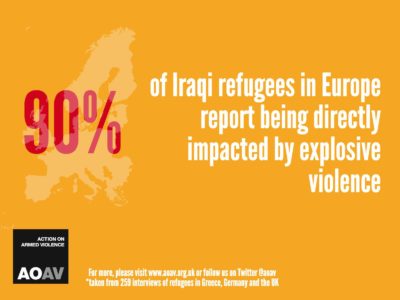 The directive defines ‘International Protection’, as encompassing both those who are refugees under the terms of the Refugee Convention, and those who alternatively qualify for complementary protection – or ‘Humanitarian Protection’ or ‘Subsidiary Protection’ as it is known in some countries. In this sense, those in need of international protection are defined as those who face ‘a well-founded fear of being persecuted or a real risk of suffering serious harm’ in their country of origin, from either state or non-state actors.

Article 15 (a) and (b) cover execution and torture or degrading treatment respectively. Whilst Article 15 (c), stipulates that serious harm may include ‘serious and individual threat to a civilian’s life or person by reason of indiscriminate violence, in situations of international or internal armed conflict.’

The armed conflict must then cause ‘indiscriminate violence at such a high level that… a civilian, if returned to the relevant country or, as the case may be, to the relevant region, would — solely on account of his presence in the territory of that country or region — face a real risk of being subject to that threat’, to invoke Article 15(c).

Explosive violence, such as that caused by IEDs, airstrikes and ground launched explosive weapons, particularly in populated areas, would – it is this reports’ contention – be included in this definition, as it is by its nature indiscriminate and often unpredictable. 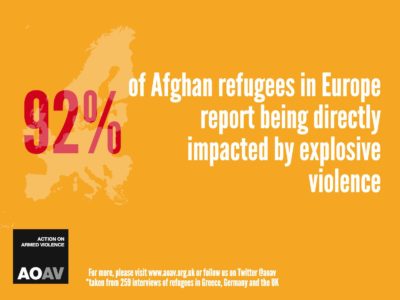 Restrictions to the applicability of the indiscriminate violence-clause are made in preamble 35, however. This states that ‘risks to which a population of a country or a section of the population is generally exposed do normally not create in themselves an individual threat which would qualify as serious harm.’ This complicates the ability to define a country plagued by explosive violence as a place where a person could face indiscriminate violence. According to this preamble, the violence has to pose an ‘individual threat’ instead of a ‘general exposure’.

The directive specifies that as part of the threat assessment in individual cases, it should be determined if internal relocation – within the country of origin – is possible to an area where the person would not face the risk of serious harm from which they initially fled in another part of the country. In this sense, the level of threat across the whole country must be determined, and it must be ascertained whether the applicant is able to safely and legally travel to a safe area.

Art. 30 of the directive guarantees refugees, and persons eligible for subsidiary protection, access to healthcare under the same eligibility conditions as nationals of the Member State. It further states that the healthcare must be adequate and should include the treatment of mental disorders. However, it remains under state discretion to decide what qualifies as a mental disorder worth treating.

The EU directive on ‘common procedures for granting and withdrawing international protection’, last amended in 2013, provides additional insight into asylum policy and desired norms across the EU. The directive states that the EU aims to forge a ‘common policy on asylum’ leading towards the development of a ‘Common European Asylum System’, for the benefit of those who, ‘forced by circumstances, legitimately seek protection in the Union.’ It is remarked that such a policy should be governed by the principles of solidarity and responsibility-sharing between member states, including sharing the financial burden of dealing with refugee issues.

EU Regulation No. 604/2013, often referred to as “Dublin III” or the “Dublin regulation”, determines that the Member State through which an asylum seeker first entered the EU has to process this person’s application.49 This has meant that Greece, Italy and Malta carry the political and economic burden of refugees arriving in Europe – northern countries have “outsourced” their border controls.