This article is part of AOAV’s report, The Refugee Explosion. The whole report can be found here. Whilst the report introduction and methodology can be seen here. The key findings can be viewed here. The report overview of explosive violence and refugees can be read here, as well as on asylum law in Europe, here, and political and economic developments, here.  AOAV’s country findings for Germany, the UK, and Greece can be found here, here, and here, respectively. For the report’s overall findings please click here, or for AOAV’s resulting recommendations here. To read some of the interviews from refugees AOAV spoke to please see here.


By the end of 2015, the UN reported that a record 65 million people around the world were displaced from their homes. In its annual Global Trends study, the UNHCR said the total figure included 21.3 million refugees and 3.2 million people awaiting asylum decisions, in addition to another 40.8 million internally displaced persons.

Conflicts in the Middle East and Africa have been the primary cause of displacement in recent years. Syria’s civil war has created 4.9 million refugees and a further 6.6 million IDPs, whilst instability in Iraq has resulted in 250,000 refugees and 4.4 million IDPs.

Numerous other on-going conflicts in Libya, Afghanistan, Somalia, South Sudan and the Central African Republic have only added to the global picture of mass displacement. 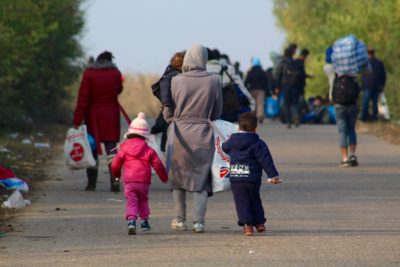 Mother and her children at border crossing between Serbia and Croatia, October 2015, Trocaire.jpg

Internal displacement has been rising at a particularly fast rate globally, with 2015 seeing 8.6 million people newly-displaced within the borders of their own countries due to conflict and violence. This trend was particularly noticeable in Yemen, where more than 2.5 million people were displaced in 2015. However, the total number of IDPs in Syria declined from 7.6 million in 2014 to 6.6 million a year later, due to large numbers of already-displaced people fleeing across international borders and becoming refugees, highlighting the trend of ‘multiple displacement’.

The majority (86%) of refugees under the UNHCR’s mandate reside in low- and middle-income countries in relatively close proximity to the conflict zones from which they have fled. Turkey is home to at least three million refugees – mostly from neighbouring Syria – whilst Pakistan hosts 1.6 million, Lebanon hosts 1.1 million, and Jordan hosts in excess of 660,000.

Despite these countries retaining the dominant share of the burden, asylum applications to the European Union (EU) have also increased dramatically.

The total numbers of asylum seekers arrived to Europe has risen significantly since 2012. In 2013, the EU-28 saw approximately 433,000 applicants, by 2015 this number had risen by over 200% to 1.3 million. According to Eurostat reports, between 2011 and 2016, Europe saw over 4.2 million asylum seekers. This huge influx of refugees has caused considerable debate among the EU member states as to how and where such numbers would be accommodated.

Germany saw the most asylum applicants in the EU in 2016, where authorities registered 745,155 applications. Italy had the second highest number with 122,960 applications in 2016, followed by France with 83,485 and Greece, where 51,110 refugees applied for protection. The UK ranks 5th with 38,785 applications.

This does not necessarily mean Germany had the highest rates per application, statistically speaking. For example, in 2015, Bulgaria led the list of EU countries with positive asylum decisions with 91%, followed by Malta (83%), Denmark (81%), the Netherlands (80%) and Cyprus (77%). Germany ranked 10th, with an overall acceptance rate of 56%, Greece can be found at 16th with 41% and the UK at 18th with 37%.

In the first three quarters of 2016, the trends remained largely the same but with increasing numbers from those countries most impacted countries by explosive violence.

Over the past 4 years over which the full data is available, each of the five countries worst-impacted by explosive violence has displayed a year-on-year increase in asylum applicants from its citizens to the EU. In general, this correlates with a rising number of civilian casualties from explosive violence; however, there are huge variants in the likelihood of being accepted in Europe dependent on your country of origin.

This section compares the AOAV casualty statistics for Syria, Iraq, Afghanistan, Pakistan and Nigeria, with the EU recognition rates for asylum seekers from these countries, from 2011-2015. The tables and diagrams to the right, show the level of recognition in the EU – in percentage terms – for each of the five countries for the years from 2011-2015. 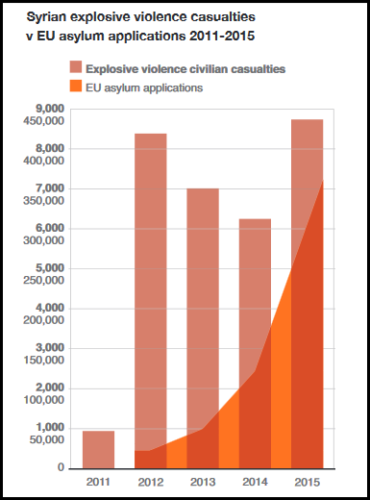 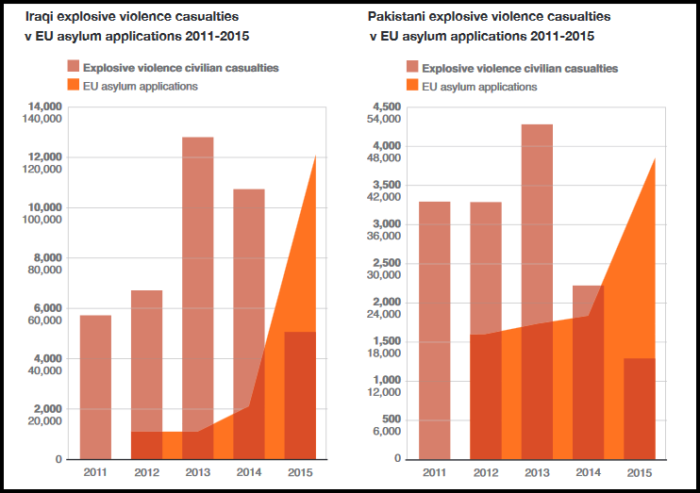 Afghanistan: in Afghanistan, the increasing number of civilian casualties from explosive violence from 2013-2015 has been reflected by a gradual increase in the recognition rate for Afghan asylum seekers – the rate increased from 47% in 2012 to 65% in 2015. Therefore, it is possible that explosive violence, and the deterioration of the security situation in Afghanistan in recent times, have had an impact on decision-makers in Europe when it comes to granting protection status from people fleeing there. However, the rate of acceptance is still considerably lower than that for applicants from Syria and Iraq.

Nigeria: the recognition rate for Nigerian applicants increased steadily from 9% in 2011 to 30% in 2014, reflecting the rising levels of explosive violence in the country. However, the rate of recognition dipped slightly to 25% in 2015, despite an increase in the level of explosive violence. Overall, recognition rates for Nigeria have remained low in spite of rising levels of harm to civilians from explosive weapons. This is likely due to the location of the violence being restricted to only a few regions of Nigeria – making internal relocation a likely reason for rejecting applicants. 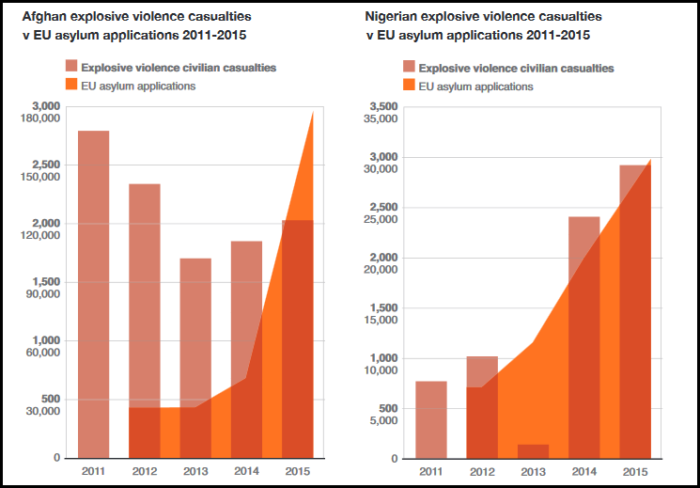