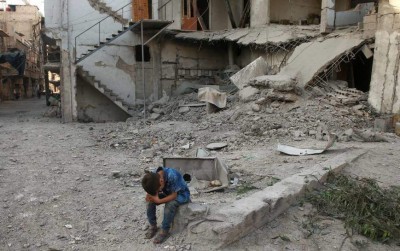 In the airstrike, the regime was believed to have used eight wide-area impact thermobaric “vacuum” rockets, which left seven children amongst the dead and over 50 injured.

The attack comes just four days after the Syrian regime agreed to a Russian-backed truce, which implemented a cessation of hostilities in the countryside of Damascus – including Eastern Ghouta.

Compared to 2015, AOAV recorded a 45% increase in civilian deaths and injuries from air-launched explosive violence in Syria last year.

In the first half of 2017, civilian deaths from air-launched explosive violence have risen by 44% compared to the same period in 2016.

The worst impacted countries were Syria, Iraq and Yemen – with 90% of all civilian casualties from air strikes occurring in these three countries alone.

Syria has seen a 42% increase in civilian casualties from airstrikes in this period.