Today, August 23rd 2017, a Saudi-led coalition airstrike hit a hotel in Arhab, just north of the Yemeni capital, Sanaa. So far 35 bodies have been retrieved and 13 are known to be injured. 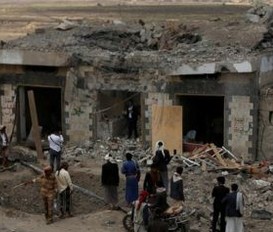 However, other estimates suggest that as many as 60 were killed, including some Houthi rebels. It has been reported that there were more than 100 people in the hotel at the time – mostly quat farmers. The two-storey hotel  was completely destroyed.

At least 25 airstrikes had targeted Sanaa and its neighbouring areas since midnight.

Saudi-led airstrikes in Yemen have caused at least 6,792 civilian deaths and injuries since 2015, according to English-language media sources.

AOAV found that 83% of the civilians killed and injured in airstrikes were in populated areas, such as schools, homes, markets and hospitals.

In the first half of 2017, Yemen has already seen 77 airstrikes, causing 559 civilian casualties. At least five of these airstrikes landed on markets and shops, whilst 31 landed on residential areas.

The destruction of civilian infrastructure has contributed significantly to the wider humanitarian emergency with 20.7 million Yemenis now in need of humanitarian assistance, according to UN figures.

There have been many calls for states to suspend their arms trade with Saudi Arabia, with the UK’s High Court ruling such sales as legal, despite evidence suggesting Saudi airstrikes had “committed serious breaches of international humanitarian law in the course of its engagement in the Yemen conflict”.

AOAV condemns the attack in Yemen and calls upon states to recognise the civilian impact of explosive weapons with wide-area impacts, which all too often result in the death and injury of scores of civilians. AOAV encourages all states supplying arms to Saudi Arabia to suspend these sales until proper investigations have been conducted and such attacks cease to occur.