Understanding the regional and transnational networks that facilitate IED use
Facebook21TweetLinkedInPinEmail

The al-Qaeda (AQ) network has three principle sources of financial support for its operations:

In its early days, AQ was almost entirely dependent on donations, and not, as was believed at the time, primarily on Osama Bin Laden’s personal wealth and business income; nor was it involved in the drugs or diamonds trade.  But today individual donations, while still highly significant, have declined in relative importance, as kidnapping for ransom and control of illicit trade routes have proved lucrative too.

While Saudi Arabia and the UAE have taken measures to clamp down on fundraising for armed Islamist groups that they have designated “terrorist groups”, Qatar and Kuwait are considerably more lax about the collection of funds within their territories for Salafi groups fighting the Assad regime in Syria.  The most favoured beneficiary is Jabhat al-Nusra (recently rebranded as Jabhat Fatah al-Sham), as well as AQ and its affiliates in other regions.

Qatar has also supported Jabhat al-Nusra financially by paying multimillion-dollar ransoms for hostages taken in the Middle East.  In addition, AQ affiliates AQIM and AQAP rely substantially on kidnapping for ransom to finance their activities:  in 2012 the late AQAP leader Nasser al-Wuhayshi claimed that over half his budget in Yemen came from ransoms.

Control of smuggling routes across the Sahel has become a further source of revenue for AQIM and allied militant groups, with the destabilisation of the region since 2012 and Libya’s descent into chaos.  The war in Yemen also enabled AQAP to establish a mini-state in the port city Mukalla that plundered the local central bank and levied taxes on shipping.

Private donations originating from the Gulf are a vital funding stream for AQ and AQ-affiliated groups.  AQ also has supporters in Pakistan and Turkey.  There is evidence that recently some funding via donations has been diverted from Afghanistan and Pakistan to terrorist groups operating in Syria.  Donors are able to use networks of facilitators and fundraisers in the Gulf to collect and move funds out to terrorist groups; the climate of impunity for these terrorist financiers, particularly in Qatar, continues to give rise to concern.

A number of Qatar-based individuals who have been named as Specially Designated Global Terrorists and placed under sanctions by one or more of the US, UK and UN for providing financial assistance to AQ and others have remained at large in Qatar. Some are apparently free to travel despite being under international travel bans, and appear to enjoy close and cordial relations with senior members of the government and the Al Thani ruling family.  Among those identified are:

The Qatar government’s reluctance to crack down on fundraising for AQ and specifically Jabhat al-Nusra, and indeed the way it provides a safe haven for Specially Designated Global Terrorists supporting them, chimes with its own high-level of support for Salafi groups fighting the Assad regime in Syria.  In May 2015, the young emir Sheikh Tamim bin Hamad Al Thani brokered a new agreement between Qatar, Saudi Arabia and Turkey to support Syrian rebel groups including Jabhat al-Nusra. Large amounts of money were already reportedly being passed to intermediaries in Turkey to buy weapons (notably from Croatia, according to the Gatestone Institute) to be transferred to groups in Syria.

Kuwait has also seen fundraisers openly soliciting donations for armed groups in Syria, mainly those allied with Jabhat al-Nusra, since at least 2012, on which we will have more to say below (in section 6.3).

Meanwhile, Gulf donors are also funding schools for imams in Syria where the curriculum includes indoctrination in the Wahhabi view of jihad.  One such school belonging to Jabhat al-Nusra was found in 2014 to have graduated over 800 hastily trained preachers in a short space of time to work across Syria.  It reportedly received a budget of $24,000 monthly from Saudi Arabia and private donors.

AQ and its direct affiliates have raised at least $125 million in ransom money since 2008, including $66 million in 2013 alone.  Of this, $91 million accrued to AQIM, $29 million to AQAP and $5.1 million to al-Shabaab.  Kidnappings for ransom in the name of AQ have mostly taken place in Africa, but more recently have also occurred in Syria and Yemen.

The first episode in this spate of kidnappings, in which €5 million was paid in Mali in 2003 for the release of 32 European tourists of various nationalities taken hostage in southern Algeria, provided the seed money for the establishment of AQIM, enabling it to recruit and train fighters before becoming a regional force and official branch of AQ.

There is evidence, in the form of thousands of pages of internal al-Qaeda documents found by reporter Rukmini Callimachi while on assignment for The Associated Press in northern Mali in 2013, that AQIM, AQAP and al-Shabaab came to follow a common methodology in their kidnappings.  They generally outsource the seizing of hostages to criminal groups working on commission, and negotiators receive a percentage of the ransom. They demand suitcases of cash, for which complicated drop-offs are arranged in remote desert areas.  Although ten years ago AQ in Iraq (a forerunner of today’s IS) would commonly behead its hostages, AQ affiliates today find hostages more valuable alive than dead, and will procure medical attention for them if required.  In addition, AQ kidnappers have taken to demanding the release of captured AQ fighters, expecting Western governments to pressure their African counterparts to this end as part of the ransom deal.

Furthermore, it is claimed that they now intentionally target nationals whose governments, unlike the US and UK, have a record of paying up.  European governments are understood to pay ransoms for hostages, although they deny this, often writing them off as aid payments.  In the case of kidnappings in Yemen, Qatar and Oman have acted as intermediaries, together paying out $20.4 million in 2012-13 to AQAP for the release of two Finns, an Austrian and a Swiss national.

The ransom negotiations in AQ kidnappings are generally coordinated by AQ Central in Pakistan; local initiative is not encouraged in this area and a commander in the Sahel was once censured for securing only a “meagre” $700,000 for two Canadian diplomats because of his unwillingness to follow the Pakistan leadership’s instructions. In his last broadcast before his death in 2011 Osama Bin Laden spoke at length about another kidnapping, involving four French hostages in Mali, which he was clearly monitoring closely.

In December 2015, the Consortium Against Terrorist Financing (CATF, a group of Western experts) published an article arguing that since at least 2013 Qatar has been openly funding Jabhat al-Nusra by means of making ransom payments.  CATF listed $150 million paid for some Turkish nationals, $20 million for some Fijians, $30 million for some Lebanese citizens, $16 million for some Syrians, $15 million for some Italians and an indeterminate figure of $4-150 million for an American.  The hostages included aid workers, nuns, bishops and UN peacekeepers.  This mechanism, according to CATF, gives Doha a way of simultaneously funding Jabhat al-Nusra’s activities in Syria and also portraying itself to its irritated Western allies in a favourable, humanitarian light. It noted that in a prisoner swap deal between Jabhat al-Nusra and the Lebanese government, mediated by the state of Qatar and which Qatar reportedly paid Nusra $25 million to accept, the prisoner release was broadcast live on Lebanese TV and Qatar’s Al Jazeera satellite channel.  The Qatari media helpfully highlight the numbers of women and children released.

Control and taxation of trade and smuggling routes

AQIM and related groups such as Ansar Dine and MUJAO are now raising revenue by “taxing” the estimated 30-40 metric tonnes of cocaine smuggled through West Africa each year, generating an estimated $800 million locally, en route from Colombia, Peru and Bolivia to Europe. (It should be noted that the scale of illicit trade in the Sahel, especially of narcotics, is widely disputed and by its nature impossible to determine with precision.) 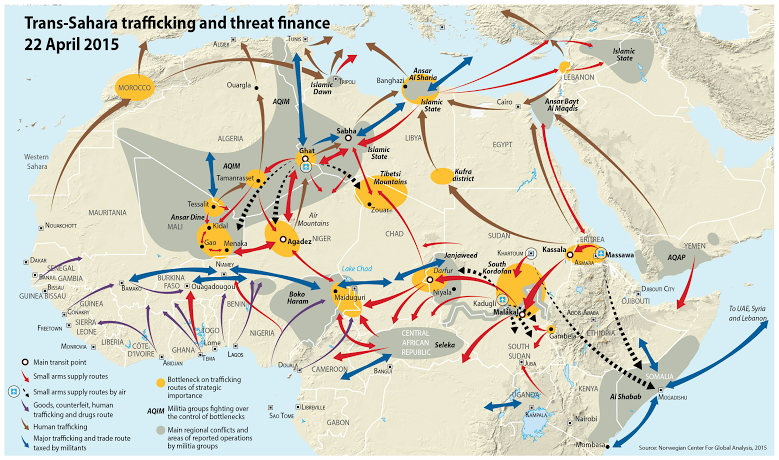 Most of the trafficking and informal trading of drugs, cigarettes and other contraband goods is carried out by individual clans of many different tribes, but primarily the Tuareg and the Bérabiche and Toubou peoples, with whom the militants often have economic links and ties of marriage.  The armed groups are less likely to be involved directly in the movement of illicit goods themselves, but they profit from the trade by taxing it as it transits the vast desert areas now under their control, according to a 2014 report by the Global Initiative Against Transnational Organised Crime.

Groups such as AQIM earn about half the profits generated from drug trafficking, which can take the form of direct cash payments or weapons, ammunition, vehicles or other equipment.  They are also reported to be profiting from the growth in people trafficking across the region to the Mediterranean coast.  While most of the people being trafficked are undocumented economic migrants, concerns have been raised about the potential trafficking of terrorists into European cities too, especially after the discovery of a MUJAO cell operating in Spain. However, according to Foreign Policy’s Michael Duffy “this seems to be anomalous and the current threat is likely vastly overblown”.

In Yemen, AQAP has profited from the Saudi-led onslaught on Houthi rebels and IS fighters to establish a small quasi-state based in the country’s third-largest port, Mukalla, a city of 500,000 people.  When Yemeni government forces turned their attention to fighting the Houthis elsewhere, AQAP moved in, seized government buildings including the local presidential palace, freed 150 of their comrades from the city’s central jail, looted vast quantities of weapons and C4 plastic explosive, and plundered $100 million from the central bank’s Mukalla branch.

Whether consciously or not modelling their newfound economic mini-empire on IS’s caliphate-building practices in Iraq and Syria, AQAP has raised around $2 million a day in taxes and customs tariffs on goods and fuel coming into Mukalla Port, sending speedboats out, armed with RPGs, to levy fees on shipping.  Tribes working in alliance with AQAP control most of the country’s oil industry, and AQAP has become the de facto fuel supplier in territory under its control.  Furthermore, from the beginning of 2016 AQAP starting making extortionate demands for millions of dollars from state-owned firms including the national oil and mobile phone companies, of which at least $1.4 million is thought to have been paid, by the oil company.

Like IS, again, AQAP is making propaganda videos portraying itself as a responsible and well-run administration with the people’s interests at heart, its fighters pictured repairing bridges and supplying medical supplies to hospitals.  In late 2015 it cancelled payroll taxes in areas under its control, calling the practice un-Islamic and saying “the poor have been paying alms to the rich and the rich don’t pay, and it’s the tyrants and oppressors who are the ones getting this money”.  AQAP rule is strict but markedly less barbarous than that of IS, local residents have commented.

It remains to be seen how badly AQAP’s withdrawal from Mukalla in April 2016 will have disrupted the group’s economic infrastructure, as US air strikes against the group continue.