AOAV: all our reportsMedia, culture and armed violenceUnderstanding the rising cult of the suicide bomber
FacebookTweetLinkedInPinEmail

When looking at the role of traditional and social media on suicide bombing campaigns, disaggregating their effect from the wider use of these mediums can be very difficult. Media operations are employed for a number of reasons: to legitimise the existence and actions of organisations; to build a political base; for training purposes; to recruit operatives; to raise funds; to network with like-minded groups; and, to enable militant-to-peer production. Today, effective media operations serve just as important a purpose as theological endeavours in terms of creating the cult of the suicide bomber.

The importance of these mediums as a driver for suicide bombing is still hotly debated. In the late-2000s, studies suggested that the overwhelming majority of individuals in the Middle East and North Africa were radicalised and recruited via interpersonal physical connections such as friends, family member or religious institutions.[i] At this point the Internet was not widely available in many areas where these foreign fighters were recruited. However, this should not be taken to mean that traditional and social media played no role in their radicalisation. 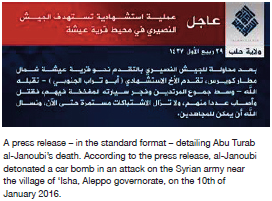 Further, internet permeation in the Middle East and North Africa has almost doubled in the last five years. Internet usage stands between average and above average in comparison to the rest of the world. Furthermore, uptake of social media applications like Facebook, Twitter and YouTube has swept across the region. The power to connect hundreds of millions of people through the use of smart phones and other internet-capable devices enables the spread of virtual messages and images through online networks.

In the last five to ten years IS, both in its current form and as al-Qaeda in Iraq, has proved successful in delivering its message to greater numbers of people than any jihadi organisation before it. On average, the organisation is thought to release 38 new items per day, including full-length documentaries, photo essays, audio clips and pamphlets, in a range of languages. Most of this content is independently produced by IS members and supporters. However, the group also runs a series of decentralised media offices. These are staffed by camera operators and editors producing local content in each of its wilayats (‘provinces’).

Despite its notoriety, the ultra-violence for which the group is famous, represents only a fraction of its media output. More common are portrayals of public works projects, civil society events and economic development. For example, Dabiq issue 9 includes a glossy four-page spread on healthcare in the caliphate. Yet, in terms of view count, military operations remain its most popular content with consumers. A large part of this media success is due to improved production values and gripping storytelling. The group’s media wing, al-Furqan, has proved very creative in its use of modern filmmaking techniques. It now spends far more time filming individual operations, using multiple cameras to record scenes from different angles. It has attached GoPro cameras to AK-47s and sniper rifles to give viewers a video game like first-person view on the action. It has even started using drones to record a birds-eye view of larger operations.

IS’ most successful media product to date has been the Salil as-Sawarim (The Clanging of Swords Series). Released in four parts, the series charts a dramatic transformation in the quality and content of jihadi propaganda. Earlier parts include fairly typical extracts from religious lectures combined with unevenly filmed guerrilla-style combat scenes. Later parts shift to a narrative form, following specific operations in some detail. The final part of the series in 2014 proved incredibly successful, racking up millions of views on video-sharing platforms in a short span of time. It also created vast ripples of excitement amongst IS followers online and others vulnerable to its message. 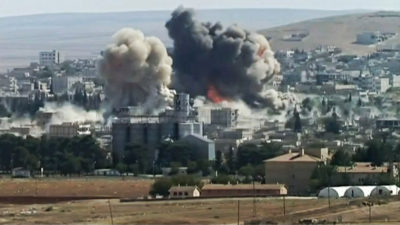 Effective storytelling has proved integral to IS’ attempts to radicalise its audiences but the use of social media also represents a key part.  After 9/11, messaging boards became the preferred social networking tool for jihadists but their ability for mass engagement was limited. Newer social media websites have proved far more effective.

IS has maximised its reach by using multiple platforms – Twitter, Facebook, YouTube, Tumblr, Telegram, Surespot, JustPaste.it, Quitter, Friendica and Diaspora. However, Twitter remains the favourite for jihadi organisations. On these platforms, low barriers for entry allow individuals to start making connections with hardened terrorists with relative ease. The Taliban, al-Shabaab, the Free Syrian Army, Jabhat al-Nusra, Ahrar al- Sham and countless members of each of these organisations have all operated Twitter accounts. Many have racked up tens of thousands of followers and allowed groups, followers and members to brag about victories, harass their enemies and rally supporters from their respective regions and globally.

Of all of these groups, the followers of IS have been most effective in their use of Twitter. By repeatedly using specific tactics such as mass re-tweeting, linked hashtags and tailor made apps, the mujtahidun, as IS refers to them, can massively boost the organisation’s reach and exposure online. During the offensive on Mosul in 2014, mujtahidun succeeded in generating 40,000 tweets in a single day. Partially as a result of these techniques, IS has been able to garner a massive following on Twitter. A research study by J. M. Berger estimated that at least 45,000 pro-IS accounts were online between September and November of 2014.[ii]

It is difficult to empirically determine the effect that traditional and social media have had on support for suicide bombing campaigns independent of general support for the organisations themselves. The Centre on Religion and Geopolitics’ recent report analysing a cross section of 114 propaganda sources demonstrates the extent to which particular ideological themes are employed, and to a lesser degree how they are used to justify particular strategies and actions like suicide bombing. Conducted between 2013 and 2015, the study focused on IS, Jabhat al-Nusra and al-Qaeda in the Arabian Peninsula (AQAP).[iii] It found that the ideological values that formed the basis for these groups’ justifications for their actions are present in 80% of the propaganda sources with Islamic creedal values deployed in 62% of sources, honour and solidarity with Muslims in 68% and explicit references to the end of days in 42%.[iv]

Most importantly, when describing honour and solidarity with the ummah, the value of martyrdom was repeatedly relied on, appearing explicitly in 32% of the sources and implicitly in 68%.[v] The central placement of honour, both on an individual and communal level, in these sources was often linked with how members of these groups were expected to conduct themselves as mujahedeen. The sources suggest martyrdom was considered the ultimate expression of honourable conduct. For example, part of a statement by the now deceased IS spokesman Abu Muhammad al-Adnani discussing martyrdom reads, “IS has known the path of honour, the path of our Prophet”. This connection between honourable conduct and martyrdom was also referenced in an AQAP Inspire article: “When Muslims return to their religion, they live in peace, security, honour and glory. And this will not be achieved except by those missiles: sacrifice, generosity, endeavour and jihad”.

Interestingly, IS referenced honour in 48% of the sources selected, almost 20% more than Jabhat al-Nusra or AQAP. This would appear to be in keeping with IS’ greater use of suicide bombing as part of its operations.[vi]

AOAV research on IS’ Dabiq magazine suggests a more straightforward glorification of suicide bombing and bombers. Produced by al-Hayat Media Centre, the magazine is released in multiple languages with a focus on attracting foreign fighters. Since September 2015, the magazine has included a section on selected military operations divided by provinces and country.

The research shows that even for an organisation engaged in traditional military operations, IS still places a large premium on suicide bombing and celebrates its bombers above most other fighters. Of the 137 operations mentioned, 86 were traditional attacks – assaults, large-scale offensives and ambushes – 32 were suicide bombings and 19 were complex attacks. Interestingly, IS fighters and commanders are never individually described or named in any of Dabiq’s operation review sections. In contrast, 98 suicide bombers are individually mentioned with 47 identified by name. The actions of these istishhadi are also almost always described. Their attacks were typically lionised, often referencing the destruction caused, and in a tone that implies the bravery and devoutness of the bomber. After each suicide bombing is described it is always followed by pleas for Allah to accept the bomber amongst the shuhada.

The use of social networking apps like Twitter has also allowed for a partial transformation in the way that recruitment can take place. However, disaggregating recruitment of suicide bombers from other types of foreign fighters at this early stage in an individual’s radicalisation process is difficult.

Traditionally, jihadi recruiters did most of their work face-to-face, travelling between different cities to gather potential recruits. In Syria, a new dynamic has emerged. Utilising social media, fighters can now recruit new members without leaving the front lines. This is process that Shaarik Zafar, of the US National Counterterrorism Center, calls peer-to-peer recruiting. For self-starting jihadis, Twitter allows a means of connecting with actual fighters to get advice on how to join the jihad. Equally, for recruiters the following function on the website allowed them to identify and contact potential targets. This has in no way replaced the old brick-and-mortar system of recruitment but it does allow for a greater number of an organisation’s members to take part in the relationship building necessary for recruitment, without undermining the groups other operational capabilities. Evidence of these recruiting networks could be found in the cases of Douglas McAuthur McCain, an IS fighter killed in 2014, who created multiple Twitter accounts that followed and were followed by said networks, and Nicholas Teausant, arrested in 2014 for attempting to join IS.