On Saturday, August 12th 2017, a suicide bomber on a motorcycle attacked a military truck near a busy bus station in Quetta, in Baluchistan Province, Pakistan. The blast left 15 dead and at least 25 wounded. 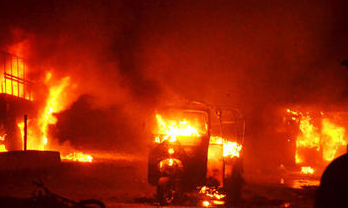 Though it was a military vehicle targeted, many of the dead and injured were civilians. Of the 15 killed, seven were civilians, as well as 15 of the 25 wounded.

Other outlets suggest the number of wounded could be higher than 40.

It is thought that the blast was an attempt to sabotage Pakistan’s Independence Day celebrations, marking its 70th anniversary today, August 14th.

Islamic State claimed responsibility for Saturday’s attack. From forensic evidence it is believed that 25kg of ‘incendiary explosives’ were being carried by the bomber.

Last year, Pakistan saw over 2,000 deaths and injuries from explosive violence. 77% of civilian casualties were caused by IEDs.

The number of civilians killed and injured by suicide attacks increased by 93%.