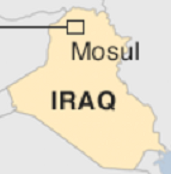 137 are thought to have been killed in one house alone, whilst other 100 were killed nearby. Most are believed to civilians, many of whom had hoped to take shelter inside the home.

It is reported that no fighting force, other than the US-led coalition, has the capability to launch an aerial attack of this scale.

400,000 Iraqis remain trapped in ISIS-held areas of the city. They face danger from the increasing conflict as well as growing food and water shortages.

A Central Command spokesperson told the Independent that they the incident was being investigated.

This means Iraq saw an 106% increase in civilian casualties from air-launched explosives compared to the previous year.

AOAV has been recording the casualties (i.e. people killed and injured) from explosive violence around the world as reported in English-language news sources since 2011. The data reflected here cannot capture the full scale of civilian suffering in Iraq, but is indicative of the patterns of harm that exist when explosive weapons are used in populated areas.

AOAV strongly condemns the use of violence against civilians and calls upon all groups to reject the targeting of civilian areas. The use of weapons with wide-area impacts should also remain of concern; due to the severe impact these have on civilians.