A Taliban suicide car bomber killed seven and injured 42 in Helmand today, August 23rd 2017. The attack is thought to have been targeting a police headquarters in Lashkar Gah. 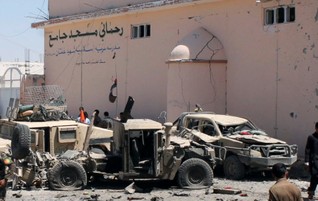 As officers lined up to collect their pay from the police station, the suicide bomber detonated their explosive-laden car, hitting a convoy of armoured military vehicles outside.

Four soldiers were killed, as well as a girl and two women. Children studying at the nearby mosque were also injured. It is expected that the death toll could rise.

Since the Taliban begun their annual spring offensive, the number of lethal attacks have risen drastically. Last month, saw a Taliban suicide car bombing in Kabul kill and injure over 70 in an attack targeting workers from the Ministry of Mines and Petroleum.

Another car bomb in Lashkar Gah in June targeted a queue at a bank waiting for their monthly pay, killing 29 and injuring 60. The Taliban were suspected to be behind the attack.

However, so far this year Afghanistan has seen a significant rise in the number of casualties from explosive violence.

In the first half of 2017, Afghanistan has seen a 61% increase in civilian casualties from IED attacks compared to the levels recorded in the same period last year.

So far this year, 87% of civilian casualties from IEDs have been caused by suicide attacks.