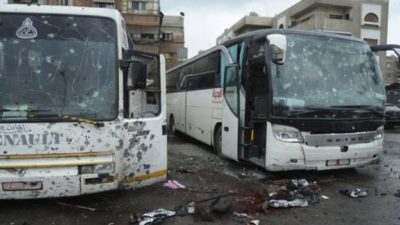 A double bomb attack on Saturday, March 11th 2017, in the Syrian capital of Damascus killed at least 40. A further 120 were wounded in the attack. Since the attack, the death toll has risen to 74 according to the Syrian Observatory for Human Rights (SOHR).

The bombings appeared to target Iraqi Shia pilgrims, who were reported to account for the majority of the dead and injured.

There are conflicting reports on the type of bombs used. Some reported roadside bombs targeting the bus carrying the pilgrims, whilst others, including the SOHR, said a roadside bomb was detonated as the bus passed and a suicide bomber detonated his explosives near the Bab al-Saghir cemetary.

Hayat Tahrir al-Sham (Liberation of the Levant Organisation) claimed the attack. They are a new group affiliated with al Qaeda and made up of Jabhat Fateh al-Sham (previously al-Nusra Frount) and four smaller factions.

The group said the attack was ‘a message to Iran’ because of their support for Syrian president, Bashar al Assad.