AOAV has identified 84 different known perpetrators of IED attacks from January 2011 up to June 2016. Of these, the vast majority are Salafi-jihadi insurgent groups active in the Middle East, Africa, Central Asia and South East Asia. Others are nationalist or separatist movements, mainly active in India, Pakistan, Turkey and Colombia. A small number of perpetrators are anarchist groups active in Europe and Central America.

Of the 10 worst perpetrators of IED incidents, eight can be described as Islamist terrorist groups, with all of them adhering to various strands of Salafi-jihadi ideology.

This report examines the networks enabling terrorist groups to carry out IED incidents. It will specifically focus on the Islamic State (IS), the Taliban, Tehrik-e-Taliban (TTP), Boko Haram, al-Shabaab and various al-Qaeda factions (such as Jabhat al-Nusra and AQAP).

Based on the casualty ratio between civilian and armed actors, the major perpetrators of IED attacks, except for AQAP and IS Sinai Province, all seem to use IEDs primarily to target civilians.  93% of Boko Haram IED casualties were civilians, and of these over 70% were killed.  In the case of IS, 87% of their IED victims were civilians, and nearly 40% of these died.  Jabhat al-Nusra’s IED casualties were 81% civilian, of which over 30% were deaths.

Although more civilians than armed actors are casualties of IED incidents, the ratio of deaths to injuries from IED attacks is higher among armed actors than among civilians.  With the exception of the TTP, groups kill more armed actors and security personnel than they merely injure.  In the case of al-Shabaab, for example, 75% of its IED armed actor casualties are deaths, against 25% injuries. For Jabhat al-Nusra, the ratio is 92% to 8%.  The reason for the high death rate among armed actor and security personnel casualties is likely to be the perpetrator groups’ high usage of roadside IEDs that target vehicles with several people on board but few, if any, bystanders near enough to be injured.  This contrasts with other groups’ targeting of shops and market places where large numbers of civilians are close enough to the explosion to be injured without being killed.

A look at country statistics on IED attacks further attests that IEDs cause primarily civilian casualties. In Iraq, the country worst affected by IEDs, 93% of casualties (both killed and injured) were civilians, and in Nigeria as many as 94%.  Only in Egypt, Libya and Yemen do armed actors and security personnel casualties account for anything even approaching half of IED casualties.

Most groups seem to have a preferred type of target that they strike. Al-Shabaab, for example, targets commercial premises such as restaurants, hotels and entertainment venues in more than a quarter of its IED attacks. Boko Haram launches a high proportion of its IEDs at markets, town centres and places of worship. The Taliban and the TTP both use more than 30% of their IEDs either on roads, against vehicles, or at military checkpoints. 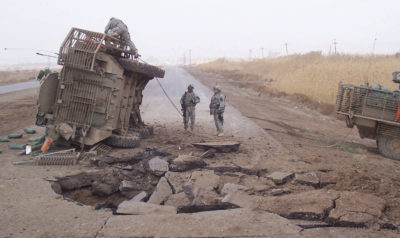 Buried IED blast in 2007 in Iraq. By http://www.flickr.com/photos/soldiersmediacenter/, via Wikimedia Commons

IS, however, attacks a more diverse range of targets. Its IEDs have targeted commercial premises (17%) such as shopping centres, malls and restaurants, army bases (12%), urban centres (12%), public buildings (9%) and markets (9%) – all basically urban locations – but 14% of its IED attacks have also occurred on roads.

AQAP seems to favour using IEDs against armed actors, and with almost half of its IED attacks (48%) having been against army bases. Similarly, Jabhat al-Nusra has targeted army bases in 29% of its attacks.

Although IS, al-Qaeda, the Taliban, TTP, al-Shabaab and Boko Haram share common traits in their usage of IEDs, such as attacking both civilians and military targets, there are also differences between their approaches to tactics and deployment. The rest of this section will therefore present what is known about these groups and their use of IEDs. In order to provide a more comprehensive picture of global IED usage, it will also present the groups that AOAV has recorded as responsible for carrying out IED attacks in the past five years.