Understanding the regional and transnational networks that facilitate IED use
Facebook42TweetLinkedInPinEmail

Although a lot of IED knowledge is self-taught, either through imitation or rigorous internet research, there is ENTTP proliferation within the terrorist community.[i] This could either be intentional or accidental. Often, knowledge is transferred by proxy rather than learning from one particular source. Individuals who have acquired skills through other groups or persons, in turn teach new students. This is the case for the Afghan Taliban, for example, who originally learnt IED-making skills from Arab al-Qaeda fighters and now are teaching their knowledge to new recruits.[ii] According to the Egyptian security forces, in a story not covered by English language media, this seems to be the case for Egypt’s worst perpetrators of IED attacks. Members of both IS Sinai Province and Ajnad al-Misr have reportedly received training in Syria, Libya or Afghanistan. After returning to Egypt, these ‘cooks’ have taught their skills to other members of their respective organisations.

There is also an element of organisations absorbing knowledge from members previously active in other groups, or even former military personnel. Besides the Baathist influence on IS tactics mentioned previously, IS Khorasan Province has been able to benefit from the knowledge of former Islamic Movement of Uzbekistan (IMU) members, who have joined the group in Afghanistan.[iii]

AOAV has been able to identify links of ENTTP exchange between organisations regarding the manufacture, tactics and use of IEDs, many of which have not been covered significantly in English language media. However, as most experts would point out, it is very difficult to fully ascertain to what extent links between groups are used, although one can definitely detect the signs of inter-organisational cooperation. It should be noted that some of the groups that cooperate are allied under either the larger IS or al-Qaeda banner. However, as they are still separate branches working in different contexts, investigating their level of interaction is important for the understanding of networks behind IED incidents.

IS’s entry into Libya has provided them with an opportunity to work with their allies Boko Haram. Although there is a huge geographic area separating IS’s previous strongholds in Sirte in northern Libya, and Boko Haram’s stronghold in northern Nigeria, the groups have been able to cooperate in the lawless landscape of the Libyan and Sahelian deserts. Arabic language media have, for example, reported that Boko Haram has sent fighters into Libya to assist IS troops. Moreover, regional intelligence officials have suggested that IS fighters may have fled northern Libya down to the south, using smuggling routes controlled by Boko Haram. There is also the obvious fact that IS in August 2016 installed Abu Musab al-Barnawi as new Boko Haram leader, therefore de facto deposing Abubakar Shekau.

Based on this, it is safe to say that there is cooperation between the two. However, an analyst AOAV spoke with said that the rumours of Boko Haram fighters present in Libya are exaggerated.[iv] A Boko Haram expert at Chatham House told AOAV that there haven’t been any material signs of cooperation between the two groups yet, but that it is certainly possible.[v] Reports in August 2016 have stated that there has been virtually no IS presence in Nigeria, besides an alleged IS recruiter who was arrested by Nigerian security forces and four Nigerian individuals bound to join IS in Libya. This does however indicate that there is active communication between the groups, although Boko Haram has had very little, both financially and militarily, to show for their pledge of allegiance.

According to AOAV’s data, Boko Haram has carried out attacks by female suicide bombers since the summer of 2014. It is therefore noteworthy that alongside reports of Boko Haram crossing into Libya, there have been reports in local media of IS Libya Province using women as suicide bombers. This emerged after Libyan army forces arrested several women linked to IS in March 2016, and there is concern among the local intelligence community that the two have been inspired by each other. Some have said that it is almost certain that Boko Haram will be able to benefit from IS’s sophisticated IED knowledge. Arabic media have also highlighted that IS’s re-positioning in Libya may allow it to build contact networks with other regional groups, such as AQIM and MUJAO. 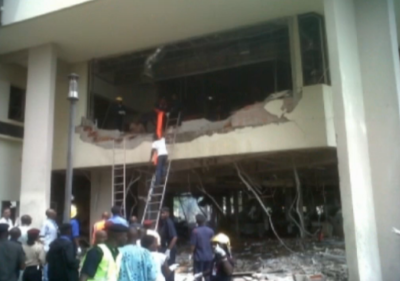 Paradoxically, Boko Haram may have increased their cooperation with al-Qaeda through AQIM since pledging allegiance to IS. Although not well reported by Western media, Boko Haram received training by Algerian AQIM operative Khaled Bernaoui as far back as 2006, and it is widely believed that AQIM assisted Boko Haram in their attack on the UN building in Abuja in 2011, with some reports even suggesting that AQIM made the bomb and delivered it to Boko Haram. Moreover, in the aftermath of Boko Haram’s invasion of Damaturu in Yobe state in November 2011, documents and manuals identified to be derived from al-Qaeda in Iraq were found, so there is a long history of interaction between these two networks.[vi] Some analysts see the Libyan turmoil as a potential to give this relationship a fresh start, despite the official ties between Boko Haram and IS. Given the alleged presence of many West African fighters in Libya from Boko Haram and AQIM affiliated groups, these have since the expulsion of IS from cities like Sirte reportedly cooperated and exchanged equipment and funding. The fact that much of Boko Haram’s IED strategy in northern Cameroon strongly resembles that of AQIM’s in Mali suggests that, if not knowledge exchange, there is certainly imitation occurring.[vii] This is probably a result of some of the fighters who previously broke out as the Ansaru group, a group with strong ties to AQIM, has returned to influential positions in Boko Haram.

Most importantly, there have been suggestions that the IS appointed Boko Haram leader Abu Musab al-Barnawi is in fact an al-Qaeda mole. This has been based on the fact that he, theologically and ideologically, is closer to al-Qaeda than IS, as well as the fact that several people in his faction have ties to AQIM. These include Mamman Nur, who previously worked as a link between AQIM and Boko Haram and reportedly masterminded the 2011 Abuja attack, and Abu Fatima, a former Ansaru operative, a group which is seen as having strong ties to AQIM. Given the existing ties between these individuals and AQIM, this relationship might be one to observe for the future.

Although these groups are allied under the al-Qaeda banner, their level of cooperation and interaction has not sufficiently been examined in English language sources. The cooperation between the groups is so strong that the two have been able to exchange ammunition, money and even people across the Gulf of Aden, according to local news outlets. Eyewitness accounts from former al-Shabaab fighters have confirmed that the group has sent people to train with AQAP in Yemen. AQAP are well known for their sophisticated IEDs, with their chief bomb maker Ibrahim al-Asiri being notorious for his craft. Although his whereabouts are unknown, and he has like many infamous jihadis been said to have been killed several times, he is believed to be alive and working in Yemen according to local intelligence.

According to two Somali sources, al-Shabaab members have travelled to Yemen, something which has led to ENTTP exchange, and al-Shabaab undoubtedly benefitted from the AQAP’s bomb making skills. This is also supported by the Somali government’s concerns that the Gulf of Aden has become a ‘terrorist borderland like the area between Afghanistan and Pakistan’, suggesting expansive terrorist movement between Yemen and Somalia. The fact that al-Shabaab was able to produce sophisticated IEDs and hide them in laptops is a direct sign of cooperation with AQAP. It is expected that figures like al-Asiri have been involved in training.[viii] As previously mentioned, the two groups also purchase much of their weaponry from the same arms dealer, Anwar Saleh Kodais. It is difficult to prove, but it is almost certain that AQAP and al-Shabaab continue to transfer ENTTPs.

AOAV has been able to identify substantial cooperation and ENTTP transfer between Jabhat al-Nusra and AQAP. Western intelligence officials monitoring the group have testified to the cooperation between the groups during Nusra’s operations in Idlib and Aleppo in 2014. Moreover, local Yemeni outlets have reported on AQAP’s adopted strategy of using their military capacities in service of goals important to local communities, thereby attempting to win the hearts and minds of the local population. This is a direct sign of communication with Nusra, who have had significant success with this ‘hearts and minds’ model of governance in Syria. Several Arabic news sources have also reported on Ibrahim al-Asiri, AQAP’s chief bomb maker, travelling to Syria and spending time with Nusra forces. In fact, he was believed to have been injured during an attack on Nusra headquarters in Latakia in western Syria in 2013. It is very likely that Asiri instructed Nusra fighters in IED manufacturing during his time in Syria.

Questions have been raised about the relationship between al-Qaeda and the Taliban following the death of former leader Akhtar Mansour in 2016. For example, Lebanese media outlet al-Modon raised the issue of there being a delay in al-Qaeda’s pledge of allegiance to new Taliban leader Hibatullah Akhundzada. There is also a reported disagreement between the two on where to focus their resources, given al-Qaeda’s global ambitions compared to the Taliban’s explicit focus on Afghanistan. The Taliban announced in early 2016 that they categorically rejected taking any action outside of Afghanistan, which supposedly shook ties between the groups. This has also led many to question as to what influence al-Qaeda still has over the Taliban.[ix] However, the fact that Sirajuddin Haqqani remains deputy Taliban leader should probably be seen as a sign of decent relations and communications between the groups.

The ties between the al-Qaeda and the Taliban are historically important. For example, the Taliban acquired their knowledge of IEDs through their al-Qaeda connections. Moreover, recent reports have suggested a growing presence of al-Qaeda fighters in Afghanistan. The US military uncovered two large al-Qaeda training camps in the Shobrak district of the Kandahar region in October last year, which turned out to be the largest al-Qaeda complex ever found in Afghanistan. It was over 30 square kilometers in size. The camp was reportedly run by AQIS, but provided training to other local insurgents. There have been reports that the Taliban are looking to make use of al-Qaeda’s military expertise. Simultaneously, al-Qaeda are looking to invest most of their resources in the Arab world – which they still see as their most important stage – whilst recruiting local insurgents to conduct their campaigns in Afghanistan and Pakistan. This strategy is personified by al-Qaeda’s choice of Pakistani cleric Asim Umar as AQIS commander. Umar has longstanding ties to several Pakistani and Afghan insurgent groups, but is rather new to the al-Qaeda brand.[x] This suggests that ENTTP exchange is likely between al-Qaeda and the Taliban as well as smaller groups related to the latter.