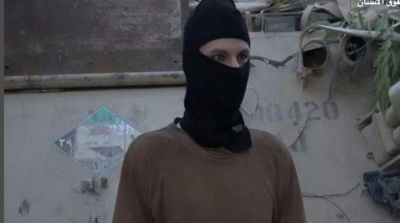 Description of the suicide bombing

In April 2015 in the northwest of Baghdad, a truck that contained seven tonnes of explosives drove into the headquarters of the 4th Regiment of the Iraqi army. IS’ magazine, Dabiq, announced that the operation to capture the military base had multiple phases, which included the use of aerial drones and ground units in order to target both the inside and outside of the facility. This tactic of using multiple operatives and differing forms of warfare in order to maximize the impact of an attack, has increasingly been practiced by IS in Syria and Iraq – three separate suicide bombers were used as part of this operation. IS claims that the attack completely destroyed the command centre building. One of the attackers in this case – profiled below – was a German citizen who had travelled to fight alongside IS.

Background of the suicide bomber

Abū Mus’ab al-Almānī, a former German army soldier also known by the name of ‘Mark K’, was 25-years-old when he participated in the attack on the 4th Regiment in Iraq. He and twin his brother are originally from Castrop-Rauxel in North Rhine-Westphalia, Germany. They both joined IS and travelled to fight with the group. His brother died fighting for IS, whilst Mark K. was responsible for the first suicide bombing on the military base.

Mark K. converted to Islam in 2012 through his engagement with the mosque community, at which time he was still in the German military service and was classified as ‘not dangerous’ by the Constitutional Protection Federal Office after his conversion to Islam. Mark was trained in the use of multiple types of weapons, including armoured tanks, during his period of military service.

It is not clear when his brother converted to Islam or when they initially travelled to Syria or Iraq, however what is known that visited Turkey in 2014 as tourists.

According to the 9th issue of Dabiq, Abu Musab al- Almani fought for the German “Crusaders army” in Afghanistan – a term used to describe Western forces which are perceived to have fought against Muslims. However according to Dabiq, the successful attack had made him a martyr who has now redeemed himself in the eyes of Allah. His “name would now be written – by Allah’s permission – amongst those whose past had been tainted with Muslim blood and would atone for it by embracing Islam and fighting for the cause of Allah until they were killed.” In the magazine, a verse from the Quran is added to explain that god guides the people who were taking the wrong path into the right path: “His grace and favour, Allah chose to guide him, {And Allah guides whom He wills to a straight path} [Al-Baqarah: 213]. It is indicated that Allah chose to guide him and make him “replace his evil with good, and make him a warrior spilling his blood for this noble cause”. IS media also filmed his attack, likely for propaganda reasons, and described Abu Musab al- Almani as a martyr when the video was released. 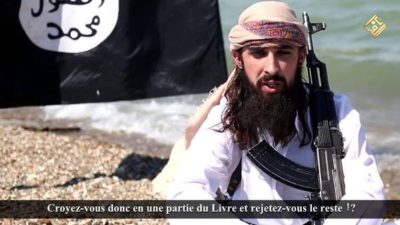 Description of the suicide attack

On 22 May 2015, two suicide attacks were carried out in the western Iraqi town of Haditha by two French IS fighters, in a coordinated assault using vehicles filled with two tonnes of explosives. The attack resulted in a death toll of dozens of Iraqis. The two perpetrators were Kevin Chassin (Abu Maryam Al-Faransi) and Abu Abdul Aziz Al-Faransi. The official martyrdom statement released by IS said Abu Maryam al Firansi “targeted a headquarters where the apostates gathered in the area of al Khasfa,” and “he invoked Allah and wounded his steed amidst their gathering, leaving dozens killed and wounded, and turning their structures into rubble”. The other suicide bomber, Abu Abdul Aziz al Firansi, “followed him with a second truck, to target barracks of the apostates.”

Kevin Chassin, 25 years-old when he detonated himself, was also known by the name Abu Maryam Al-Faransi, and grew up in the city of Bourbaki, north of Toulouse. Kevin comes from a non-Muslim family, but converted to Islam and then became radicalised, before later going on to join Islamic State. Kevin is known for his presence in a picture with a severed head, and for featuring in the seven-minute long IS propaganda film entitled ‘What are you waiting for?’, which released by Al Hayat Media Centre, and shows three French jihadists (Abu Osama al-Faranci, Abu Maryam al-Faranci, Abu Salman al-Faranci) urging their fellow countrymen to ‘kill the enemies of Allah’. The film opens with the French Jihadists burning their passports, a move that became popular among the IS foreign fighters to show their detachment to their nationality, and demostrate their belonging to the Islamic state. A masked man can be heard saying “We disbelieve in you and your passports, and if you come here we will fight you.”

Abu Maryam al-Faranci was also shown in the video, holding a large sword and an AK-47 assault rifle and threatening other French citizens that IS fighters “will not hesitate to cut your heads if the French government keeps bombing Iraq and Syria”.

Commenting on the banning of the niqab in France, he says “Just wearing the niqab [face veil] is very difficult”, he calls on French Muslims to wage jihad, exclaiming: “What are you waiting for? Do you not look around you?”. He also appeals to other would-be terrorists, stating that IS is “ruled by the Sharia of Allah and gives every Muslim his due rights.”

The film also urges the people who can’t join the fight with IS in Syria and Iraq to “operate within France”, and encourages them to “terrorise [the French public] and do not allow them to sleep due to fear and horror.”

Confirmation of the suicide attack that was carried out by Abu Maryam Al-Faransi and Abu Abdul Aziz Al-Faransi was released by the Islamic State’s Wilayat al Furat, or Euphrates Province.

Kevin’s half-brother Brice was called by an IS jihadist in the aftermath of the incident, to inform him that Kevin was one of the two French suicide attackers against the Iraqi military targets in Anbar. He also received a photo of Kevin smiling and pointing his index up to the sky, supposedly taken just before boarding a truck to carry out the attack.