On the evening of Friday 13 November 2015, a set of multiple, co-ordinated, large-scale terror attacks – consisting of a combination of gun attacks on restaurants, bars and a theatre, and suicide bombings outside a football stadium – unfolded across the French capital, Paris, leaving 130 people dead and hundreds more wounded. Three co-ordinated teams of jihadists were responsible for carrying out the attacks at numerous locations across the city. The vast majority of casualties came from the shooting incidents, carried out by terrorists using Kalashnikov-type assault rifles. However, all of the attackers also wore suicide belts, the majority of which were detonated after the shootings had taken place. The main attack involving explosives began at approximately 21:20, and featured the use of suicide bombs outside the Stade de France in northern Paris – where France were playing Germany in an international friendly football match. IS claimed responsibility for the attacks, including the Stade de France blasts.

The first bomber – a man believed to be named Ahmad al-Mohammad – detonated his vest on the rue Rimet at 21:20. The second bomber attempted to enter the stadium, however his suicide belt was detected by the security guards, so he backed away and instead detonated the device in the nearby rue de la Cokerie at 21:30. This bomber was identified as 20-year-old Bilal Hadfi. The third bomber was named M al-Mahmod, who detonated his vest in front of one of the entrances to the stadium at 21:53. In the centre of the city, another suicide bomber Brahim Abdeslam blew himself up in a restaurant, injuring several people.

Little is known about two of the Stade de France bombers – Ahmad al-Mohammad and M al-Mahmod. However, they are believed to be from Syria and were identified only by their passports, which were found near their bodies following the explosions. The passports provided authorities with their names, ages and the regions where they resided in Syria. However, later investigations revealed the passports to be fakes, and the two bombers have since been traced to have entered Europe posing as refugees through the Greek island of Leros on 3 October. More information is known about the other bombers involved in the Paris attacks, who are profiled below. 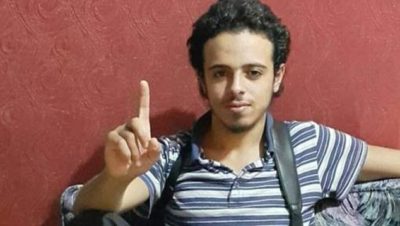 Bilal Hadfi, 20 years old, was also known as Bilal Al Mouhajir or Abu Moudjahid Al-Belgiki. Bilal was a French citizen of Moroccan origin who lived in Belgium, and was the youngest of the Paris suicide bombers; Bilal was labelled in the media as the “baby-faced suicide bomber.” He denoted his suicide vest near gate H of the Stade de France, killing no-one but himself.

Bilal was raised in Neder-over-Heembeek, a suburb in the north of Brussels. He attended the technology college Diest Koninklijk Technisch in the town of Diest, where he studied IT; however, he failed the exams and went on to attend another school, after which he trained to be an electrician. Bilal wasn’t described as ambitious in his school, and many times in class he reportedly expressed that he wanted to be a lorry driver.

Bilal could also be described as a typical teenager, who was obsessed with football and updating his Facebook profile with news and comments about his favourite teams. However, he wasn’t particularly popular at his school and also wasn’t particularly religious prior to his radicalization. Bilal started posting photos of guns, piles of cash and photos of him sunbathing topless before he left to fight in Syria in 2015. He also began to change some of his habits – he decided to quit smoking, stopped listening to music, saying that it was haram (forbidden), and began fasting two days a week. On many occasions he openly supported Boko Haram and displayed his approval of the Charlie Hebdo massacres in class.

Before leaving for Syria, he informed his classmates that he was leaving school, and when his mother was asked to explain why, she said that her son had gone back to Morocco because he was fed up with the school. The school issued a warning of Bilal’s departure to the local education authorities, and mentioned that he had been showing signs of radicalization before his disappearance. However, the warning was not passed on to the police.

During his time in Syria, he contacted his mother once and told her that he was worried that she would go to hell as a result of living in the country of the ‘Kufar’ (infidels). When Bilal returned from Syria in July 2015, he issued a call on Facebook for Muslims to attack Western countries.

Influences on decision to become a suicide bomber

Bilal was having considerable difficulties at home, where he lived with his mother and his two brothers. He became upset after his father died several years before the attacks, and began to display significant changes in behaviour – he started smoking marijuana, skipping classes and ‘hanging out with the wrong friends’, as reported by his school.

It is believed that Bilal was radicalized by a Belgium imam, according to Het Laatste Nieuws. However, the name of the imam is still unknown. Bilal also began to associate himself with extremists and quickly transformed into a young man determined for jihad. He was reported to be friends with the Belgian Jihadi Abou Isleym on Facebook, who is known to fight in Syria.

In his call against the West that was issued on Facebook, he said: “Hit the pigs in their communities so they no longer feel safe even in their dreams.” IS also released a video after Bilal committed the suicide attack, proving that Bilal had previously been present in Raqqa; the video shows IS fighters beheading several hostages, and Bilal talks to the camera saying “You destroy our homes and kill our fathers, our brothers, our sisters, our mothers and our children.” 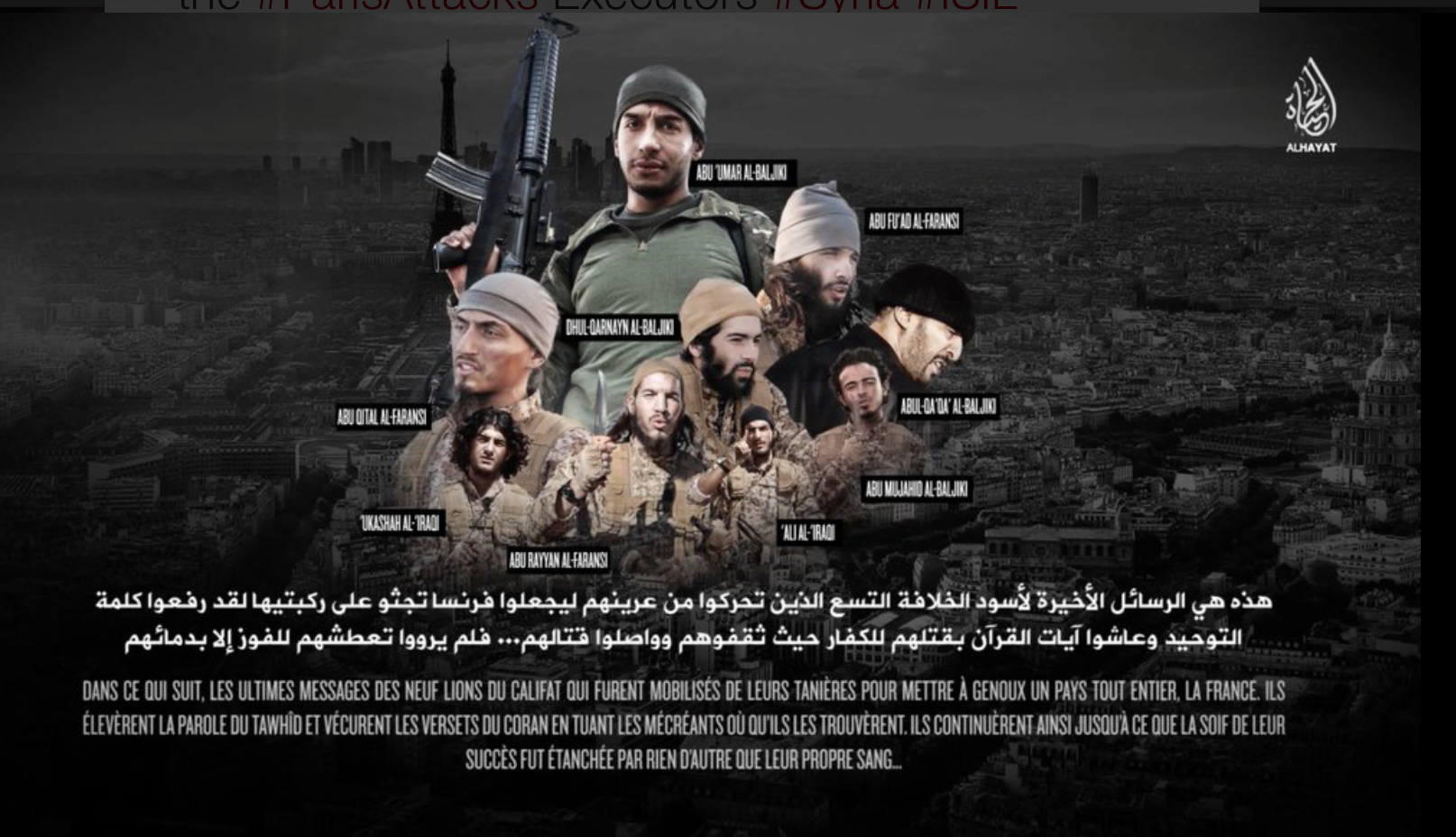 ISIS released a poster with pictures of the nine Paris attackers, announcing that the Paris attacks have brought France to its knees and have brought the word of Tawheed high, and have lived the verses of Quran by killing the infidels (Kufar).

Community and family response to the attack

Bilal’s mother Fatima Hadfi, said she had missed major warning signs of her son’s radicalization; she said that her son had been friendly and helpful, and blamed herself for not being able to notice his behaviour changing. She was also glad that her son had only managed to kill himself at Stade de France and not anyone else. In another interview on La Libre Belgique, she said that her son’s change of behaviour was a threat and that he was like a ticking bomb, however acknowledged that she didn’t take any action regarding her concerns.

In the college where Bilal studied, some of the staff members noticed signs of radicalization, and in April 2015 after he went to Syria, they informed the education authorities of their concerns about his disappearance and behaviour. However, the warning was not handed to the police and only came to light after the Paris attacks had taken place. One of Bilal’s teachers at Diest Koninklijk Technisch also expressed how she has felt a sense of failure since the attack, as one of her students committed this act yet she wasn’t able to get through to him. 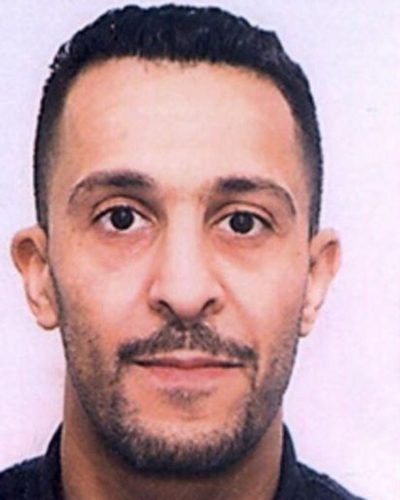 Brahim Abdeslam was born on July 30, 1984. Brahim blew himself up in the Comptoir Voltaire brasserie restaurant in the 11th arrondissement, killing himself and severely injuring a waitress. Brahim was dropped off by car outside the restaurant, before going inside and blowing himself up. The restaurant’s CCTC camera captured his death, and showed that Brahim was wearing a bomb belt strapped around his body.

Abdeslam was a 31-year-old French citizen who was brought up in Brussels by Moroccan parents, named Yamina and Abdaramane. His father was a metro driver, and was not particularly religious, only visiting the mosque on Fridays; whilst his mother Yamina can be described as progressive compared to other women from similar backgrounds. Brahim has five siblings; the most known of which is Salah Abdeslam, who was captured in March 2016 in Brussels after refusing to detonate his own device on the night of the Paris attacks.

Brahimh had trained as an electrician, and along with his brother Salah, used to run a grocery and a café in Molenbeek called Beguine, together with other relatives. However just few weeks before the attack they both resigned their share in the family’s businesses. The café was run as a place to smoke Hashish, and had been closed down by the authorities in August 2015 for drug-related activities.

Brahim’s former wife Naima, who was married to him in 2006 before getting divorced in 2008, said that Brahim’s favourite activities were sleeping, playing cards and smoking weed. She said he used to smoke cannabis every day and drink alcohol, whilst he rarely prayed or attended a mosque except during Ramadan. For two years while he was married, Brahim didn’t work even for a single day and the couple lived off unemployment benefits, amounting to €1000 for both of them per month.

Further investigations into Brahim’s life after the attack uncovered that he had joined IS in Syria in early 2015 following a trip to Morocco. On 24 January 2016, Al Hayat IS media released a video as a tribute to the Paris attackers that showed Brahim in Raqqa, Syria. Belgian authorities confirmed that Brahim had travelled to Syria for 10 days, where he received a limited amount of training from IS.

Community and family response to the attack

After the attack, Brahim’s younger brother, Mohamed Abdeslam was arrested in Brussels and was later released without charges being filed. He gave a statement to the media following his release, explaining that he had no idea his brothers were radicalized and stating that his family was in a state of shock, and were deeply touched by what happened. He added that “At no point could we have thought that my brothers were involved in this… we did not know that my brothers had been radicalised. We only found out about this on television.”