As described by a fellow fighter in Inspire’s issue 6, Abu Hatim was “A man dedicated to the religion of Allah; pious, devout, optimistic, a lover of the kitâb of Allah, and intimately involved in asking Allah for shahâda’.”

He left school against his parents wishes claiming, “How do I answer Allah regarding sitting with women!” He had heard about the stories of the mujahidin in Somalia, Iraq and Afghanistan and at the age of 18 he joined the Jihad. He attended the training camps and was praised as intelligent, fast learner and with the skills of a commander. He would lay at night staring at the sky and cry for the paradise awaiting him.

A year later he was pictured in one of Al Qaeda’s videos “Rad al-‘Udwân” (Repulsion of Aggression) as a fighter, but his main objective was Martyrdom, rejecting any gains in this world. According to the story told in Inspire, he was granted martyrdom in Hudaydah, killing 4 people.

The story of Abu Rawi is told in Inspire’s issue 13. He spent 4 years in a Saudi Prison according to the magazine, due to his beliefs. Once released from jail, he joined the mujahideen in the Arabian Peninsula. The story tells us he had lost 4 of his sons as martyrs, one of them by an American drone attack in Hadramawt. 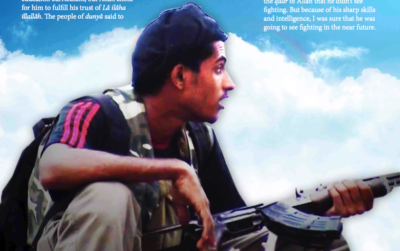 Three years later, he registered himself in the martyrdom-seeker list, only 2 weeks after the death of one of his sons. The Amir had asked him not to, since it would be too much for his wife to handle, but Abu Rawi had made up his mind.

On June 26, 2014 a multiple attack was carried out at a Military Intelligence building connected to the american drone program. A suicide bomber detonated a car bomb at the entrance of the base, another bomber detonated his device at the airport and the third one at the communications center.   The driver was Abu Rawi As-Sway’ari.

Abu Hanifa al-Hollandi’s real name has not been disclosed, but his nom de guerre suggests the Netherlands as his country of origin. He was identified as the suicide bomber who carried out the attack on the Presidential Palace in January 2016, killing 6 and injuring 11. A video later distributed by IS named “Crush your enemies” features Abu Hanifa before and during the attack. Even though he does not offer any personal reasons for his martyrdom, he calls on all Muslims, including Europeans, and especially in the Netherlands, to do Hijra, or emigrate to the Islamic State.

On January 17, 2016, Abu al-Qa’qaa’ al-Adani detonated his car bomb outside the residence of the police chief, General Shalal Shaea. The video shows, as with Abu Hanifa, the last words of the perpetrator and the images of his martyrdom.

On March 25, 2016, three suicide bombers targeted checkpoints around Aden. One of the bombers, Soheib al-Wiqari, in the video says: “..to rule the land with the laws of Allah…we are willing to put our blood and our lives on the line in order to see God’s rule on Earth”

Abu Hamza al-Shabuani says in his declaration: “I bid you, my brothers, in suicide missions, for i swear they heal your chests and shove the infidels into the pits of hells”

Abu Aisa al-Ansari, who detonated his bomb at the entrance of a military training camp on February 2016, says: “I bid you…by Allah i am proud…the “suicide operation” is the easiest way to heaven”.

And finally the narrator, addressing the brothers in Yemen, states: “..know that we are not in need of a large number of soldiers nor a large number of weapons, all we need is men who are genuine, true and commited to Allah.”