The files examined in this section were passed to AOAV on a memory stick that held part of a large cache of documents, which were stolen from the head of Islamic State’s internal security police. The man who stole the files was a former Free Syrian Army fighter who had converted to IS during the course of the Syrian civil war. He was disillusioned with the leadership of IS, which he claimed has now been taken over by former soldiers from the Iraqi Baath party of Saddam Hussein. He claims the Islamic rules which he previously believed to underpin IS as an organization, have now totally collapsed within the group, prompting him to quit.

The documents to be explored here, are questionnaires for would-be IS recruits, listing their real names, their fake names, who introduced them, their countries of origin or residence, experience of jihad, education, date and place of birth, date of arrival in Syria, route, phone number and additional details about the potential recruit’s family.

Nationals from at least 51 countries had to give up personal information as they sought to join the organisation. The questionnaires that seem to make up the bulk of the documents cache were filled out in November and December 2013. The eventual value of the documents may lie primarily in offering insights into the patterns of recruitment at the time, including which countries the volunteers were mainly drawn from. A drawback however, is that the documents represent only a snapshot from 2013, and recruitment patterns may have changed as IS became better known in Europe over the following years.

Many of the men passed through a series of jihadi ‘hotspots’ – such as Yemen, Sudan, Tunisia, Libya, Pakistan and Afghanistan – on multiple occasions, but were apparently unchecked and unmonitored by various authorities, and were able to enter Syria to fight and then able to leave Syria to return home.

One of the files obtained as part of the larger cache – and the most extensively analysed here – was marked “Martyrs”.  It detailed a brigade manned entirely by fighters who wanted to carry out suicide attacks and were trained to do so.

The ISIL registration sheet, which reads right to left as Arabic does, requested the following details: 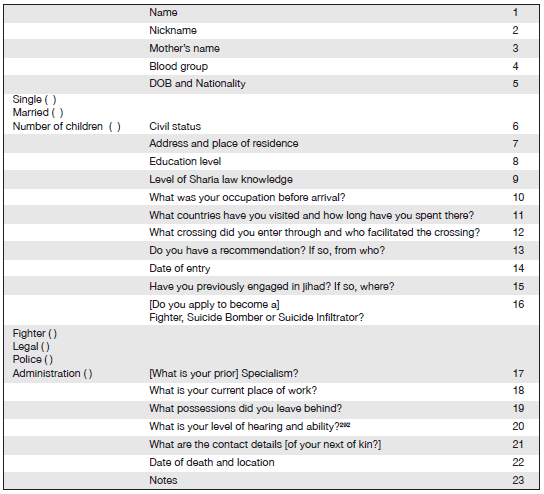 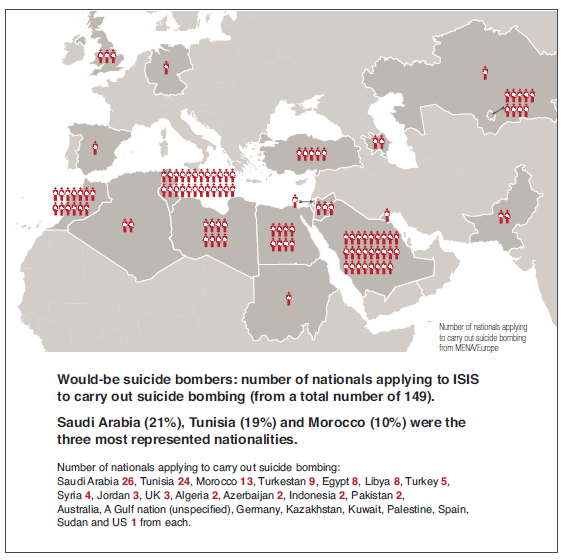 For exit forms, suicide bomber was listed under the field ‘Specialism’. The researcher uses the term ‘suicide martyr’ as a catchall referring to either suicide bombers and suicide infiltrators.

The following colour coding applies to the spreadsheet based on the information obtained from the cache of documents.

BLACK text is information directly translated from the forms, such as Date of Birth, Nationality and Date of Entry etc.

BLUE text is data which was created through calculation (e.g. age at entry) or through the researcher’s reliable inference (e.g. age at entry into ISIL territory calculated from birth date and entry date, and the nationality of the person who recommended that subject, estimated from regional name variations). The column ‘Prior Affiliation’ was created to reflect cases where the applicant mentioned the group to which they previously belonged in the notes. It does not have its own field in the ISIL forms.

Family details – including the family address and family contacts – were removed by the researcher to protect their privacy.

The forms appear to have been sourced from several ISIL border points with different data handlers, reflected by inconsistent data entry. The manner in which inconsistencies were handled depended on the category. Further explanation of how inconsistent data was handled is discussed below: 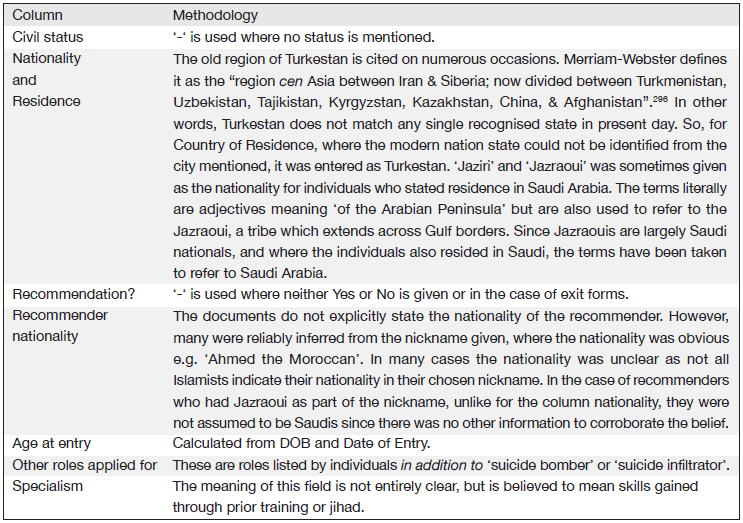 149 individual, male, prospective suicide bombers were identified from among 146 registration forms and three exit forms. Three of those also specified a preference to be suicide infiltrators. All sign-ups took place between 2012-14 and no female suicide martyrs were identified among the documents.

The vast majority of registrants entered ISIL territory through ISIL’s northern crossings, along the northern Syrian border with Turkey.

Again, the vast majority (77%) of registrants joined the group when they were between the ages of 20 and 31, with an average age of 26.

Of the registrants, the majority were single (70%) and most (76%) had no children. Of those who did have children, the majority had either one or two. In other words, they did not have large families to the extent that is common in the Arab and Islamic world.

Saudi Arabia (21%), Tunisia (19%) and Morocco (10%) were the three most represented nationalities in the data. The total population size of Saudi Arabia and Morocco is greater than 30 million in each of the two countries, whereas Tunisia only has a population of around 10 million people. Therefore Tunisia, far outdoes any other nation in terms of the number of jihadists exported relative to population size.  We examine Tunisia’s role as an origin of suicide bombers later in this report.

Nationals and/or residents of the West (including Western Europe and Australia) were represented in only 9 cases, representing just 7% of the recruits. Only one US national was registered to become a suicide bomber.

The typical education of a suicide martyr is secondary level (58%), followed by university (25%) and then primary level (10%). Not all secondary and university students completed their studies.

Occupations prior to joining ISIL were varied, but the largest proportion (29%) were either students or unemployed. The top five other professions represented in the dataset were all unskilled.

ISIL’s system of endorsement (or recommendation) of new recruits by known religious figures is a system used in order to prevent infiltration by spies and facilitate entry to the group. The vast majority (88%) of the 146 registrations joined with a recommendation. In 80% of those cases, the recommender’s nationality matched the individual’s country of residence. This suggests having a network of foreign agents (or endorsers) is critical to recruitment from outside ISIL’s territories since the process is more parochial than cosmopolitan.

Only 5 of the 146 registrants specified a prior specialism, all of whom had experience in combat.

The average age was found to be 26. The median was 24 and the spread as follows: 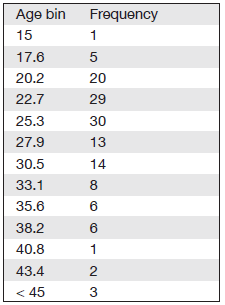 Of the 144 cases where the applicant’s civil status was identified, the majority were single.

34 individuals of 144 individuals who completed the civil status field indicated they had children, which represents 23.61% of registrants. The vast majority (76%) had no children. Among those who did, the majority had one or two.

The nationality of 124 individuals was identifiable. Among the 13 countries represented, Saudi Arabia (21%), Tunisia (19%) and Morocco (10%) are the most represented.

It is likely that the number of Saudi nationals is significantly higher. 11 individuals who identified as residing in Saudi Arabia did not specify their nationality. However, a look at the family name strongly suggests (but does not confirm beyond doubt) that they are Saudi nationals. If assumed to be Saudi nationals, the proportion rises to 30%.

Tunisia, whose population size is just over 10 million (2013), outdoes any other country for percentage of suicide martyrs exported relative to its comparably small population size.

Nationals or residents of the West (western Europe, Australia and the US) were represented in only 9 cases, representing 7% of the total number of recruits. 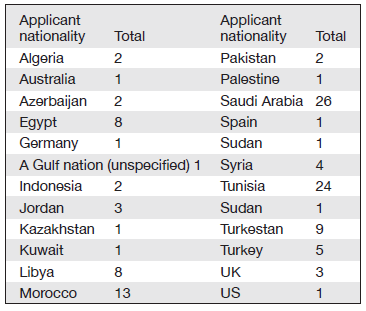 The level of Sharia law knowledge was indicated by 125 individuals. Of these, the majority (68%) indicated a basic knowledge of Sharia, followed by 29% saying they had intermediate knowledge.

Only 3% indicated an advanced knowledge of Sharia.

Occupation prior to joining

Unsurprisingly, there was a highly varied spread of occupations prior to joining ISIL. 140 registrants responded to this field, with the remaining 9 having not answered the question.

The top occupations were:

The above data shows that the top occupations prior to joining ISIL were primarily unskilled.

Of 146 completed registration forms, the vast majority of recruits (88%) said had they received a recommendation (or endorsement) to join ISIL.

The spread of nationalities among the 81 ISIL Recommenders named in the documents was: 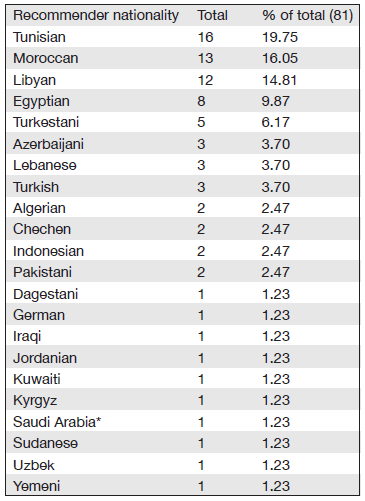 *See Methodology for an explanation as to why the figure is significantly lower than expected.

Of 146 individuals, 20 indicated having previously embarked on jihad, representing 13.70% of registrants. None had previous experience of jihad in more than one country.

Of the 20 with prior experience, only 6 indicated the jihadi group to which they were previously affiliated:

5 registrants of 146 (representing 3.42%) mentioned a specialism, presumably gained through previous experience or training. 100%, or all 5 of these individuals, mentioned a specialism in combat. Of them, 60% (3) noted prior jihad experience. It is assumed that the remaining 40% (2) had training in combat without having the opportunity to put it into practice during jihad.

Only 4 of 146 individuals indicated any desire to undertake a role other than ‘suicide bomber’. Of them, 2 indicated a desire to also be combat fighters, 1 ‘a suicide infiltrator’ and another as both.

Prior travel and entry

56 did not indicate that they had visited another country previously. 89 did list one or more countries. Again, there is great variation with regard to the countries visited, but a few stand out – namely Libya, Egypt and Turkey. It is unclear whether those countries were visited en route to joining ISIL or for other reasons. As is clear from the statistics on ‘Entry point to ISIL territory’ (below), most of the registrants entered through ISIL’s northern borders in Syria. It would therefore be unsurprising if Turkey is mentioned as part of the route of travel to jihad.

139 individuals indicated through which border point they entered Syria before reaching ISIL-held territory. The majority (66.18%) entered through the Jarablus or Tell Abyad crossings, and the vast majority or crossing points cited are located in northern Syria. 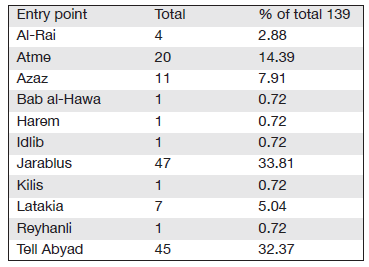