SIEDs in Afghanistan and Pakistan are largely associated with the Afghan and Pakistani Taliban (Pashto or Dari Tālibān ‘religious students’) and their various splinter groups, most prominently the Haqqani network and Jamaatul Ahrar (Society of Free Men). AOAV recorded 1,453 civilian deaths and injuries in suicide incidents here in 2015.

This beleaguered nation has suffered consistently from suicide bombings, perpetrated by the Taliban and other groups opposed to the US presence. The timeline of such attacks is since the resurgence of the Taliban movement in 2007 after the US invasion.

Until the US invasion and occupation in the wake of the 9/11 attacks, the Taliban had never carried out a single suicide bombing. However al-Qaeda cadres in Afghanistan had assassinated Ahmed Shah Messud, the leader of the anti-Taliban Northern Alliance using a bomb hidden in a video camera – killing the ‘cameramen’.

It seems that most of the attacks launched against US government forces in the immediate wake of the invasion were also carried out by members of al-Qaeda. However, by 2005 the number of suicide bombings had begun to increase significantly, and by 2007 – with the successes of suicide bombings in Iraq apparently evident – the Taliban were launching large numbers of suicide operations on a regular basis.

Afghanistan has had the dubious honour of consistently being one of the worst-hit countries by suicide bombings for what is now approaching ten years.

The Pakistani Taliban – an imitation group which emerged in the porous border region between Afghanistan and Pakistan – do not share a command structure with the Afghan Taliban, and the Afghan Taliban itself has splintered into many smaller groups with varying connections to the central command. Nonetheless, the Pakistani organisation shares much with its Afghan inspiration, including its use of suicide bombings.

Unlike IS, which makes wide-ranging use of suicide bombers in a range of conventional territorial combat roles, Taliban groups largely deploy suicide bombing in a more traditional context, hitting symbolic targets – civilian gatherings, state buildings or gatherings of security personnel.

AOAV recorded 49 suicide bombings in Afghanistan and Pakistan in the course of 2015. 25 – just over half – were attributed to the Afghan Taliban (20), Tehrik-i-Taliban Pakistan (4) or Jamaatul Ahrar (1), with the others going unclaimed.

Only two were recorded as targeting civilian gatherings – almost all of the others targeted either state forces or government employees.

The Afghan Taliban have regularly claimed not to attack civilians – but exclude government employees or ‘collaborators’ from the definition of civilian. In any case, regardless of their rhetoric, groups closely associated with the Afghan Taliban certainly do carry out mass-casualty civilian attacks.

Finding biographical details on bombers is perhaps even more difficult in Pakistan and Afghanistan than in Iraq. Often in Taliban reporting not even a nom de guerre is given – the usual terminology is simply ‘a lion’ (asad) – and martyrdom videos are now rarely released publically, even if they are still produced. 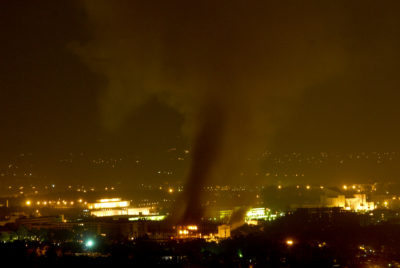 Suicide truck bombing outside the Marriott Hotel in Islamabad in 2008. By Jawad Zakariya, http://www.flickr.com/photos/jzakariya/2872647175/, CC BY 2.0, via Wikimedia Commons

The Taliban in general – on both sides of the border – recruit predominantly from Pashtun tribal areas. In Pakistan this largely means the Federally Administrated Tribal Areas (FATA), a chronically underdeveloped area along the Afghan border, and Khyber-Pakhtunkhwa province more broadly.

Ideas of ‘tribal culture’ are often evoked in relation to suicide bombing. In the vast majority of cases, they are totally irrelevant – the idea of the tribe ceased being important to most Arabs hundreds of years ago, for example. In Afghanistan and Pakistan, however, the tribal dynamic probably does play a role in suicide bombing recruiting. A Pakistani counter-terrorism expert asserts that around 90% of suicide bombing recruits in training centres in South Waziristan are Pashtuns; 70% were from the Mehsud tribe specifically. Likewise, according to a study of bombers’ remains, 80% of Afghan suicide bombers were missing limbs or suffering from serious illnesses – illnesses for which treatment was not readily available. This speaks to a deep-seated disaffection and lack of prospects.

As well as the serious underdevelopment and poverty that afflicts many of the areas the Taliban sources its bombers from, it is also important to note that these areas have suffered from a simultaneously heavy-handed and indecisive security response from the central government.[i] Both the Pakistani Zarb-e-Azb campaign and NATO drone strikes have been widely criticised for accidentally killing civilians. This may have an effect on recruitment for suicide bombing; the security response has certainly been credited with accelerating Taliban recruitment.[ii]

As well as recruits, the Afghan Taliban has – at least on a few occasions – made use of what appear to have been coerced bombers; at least one drugged child has been used in a suicide bombing (which failed; the child was later pardoned).

[i] Quoted in Hassan Abbas, “The Taliban Revival: Violence and Extremism on the Pakistan-Afghanistan Frontier,” Yale University Press, 2 May 2014.

[ii] Quoted in Hassan Abbas, “The Taliban Revival: Violence and Extremism on the Pakistan-Afghanistan Frontier,” Yale University Press, 2 May 2014.