The third area, whose epicentre lies in northeastern Nigeria, is associated with the Boko Haram group, which was founded in 2002 as the ‘Nigerian Taliban’, developing into an armed insurgency in the late 2000s. In 2015, which saw the expansion of Boko Haram’s suicide campaign to neighbouring Chad and Cameroon for the first time, AOAV recorded 2,952 civilian deaths and injuries in this region, 2,062 of them in Nigeria.

This area is a new hotspot that has emerged in the last two years. Although suspected Boko Haram cadres launched attacks in Nigeria before 2014, often quite spectacular ones, it was only in 2014 that casualty numbers began to spike and the campaign intensified.[i]

Boko Haram, like the Taliban, is in some ways a relatively traditional user of suicide bombings. At the height of their territorial insurgency in 2014, they occasionally used suicide bombings in population centres to draw troops away from their main areas of operation in the north of the country. However, in late January 2015 a local coalition of states launched a major offensive against Boko Haram in northern Nigeria and Cameroon, driving them back into their remote strongholds.

At least part of the high lethality of Boko Haram attacks is probably due to the sophisticated military-grade cluster weapons that the group has acquired, probably from Nigerian stockpiles. 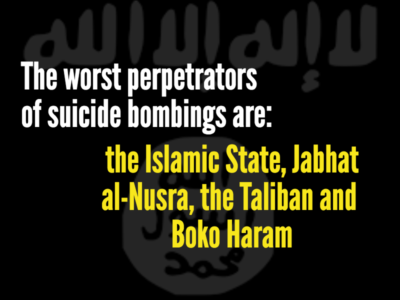 As in the other two hotspots, information about individual suicide bombers is very hard to come by in Nigeria. Boko Haram’s membership is sourced not only from the remote and underdeveloped far northern regions of Nigeria itself, but also from areas across the border in Cameroon and Niger. Identifying the bombers is rarely the foremost concern for law enforcement, and even if work is being done information is not made publically available.

What we do know is that many of Boko Haram’s suicide bombers – in a break from typical practice by other Salafi-Jihadi groups – are women or, more commonly, younger girls. At least one bomber has claimed to be one of the abducted Chibok schoolgirls, indoctrinated and coerced into carrying out an attack. Reports from inside the group bear many of the hallmarks of cult-like experiences (such as charismatic leadership, heavily restrictive policies, isolation, sexual exploitation). Another bomber in Nigeria, who ultimately refused to detonate her bomb, claimed that she joined Boko Haram because of ‘spiritual problems’, married twice and then – when she refused to remarry – was expected to carry out a suicide bombing.