Tunisia has only experienced two suicide bombings between 2011 and 2015: the suicide bombing on a beach resort in Sousse in October 2013, as well as the attack on a bus carrying member of the presidential guard in Tunis in November 2015.

The country has however seen a large number of its nationals travelling to join and carry out suicide bombings for organisations like IS and Jabhat al-Nusra. According to the UN Working Group on the Use of Mercenaries, Tunisian nationals form one of the largest groups of foreign fighters travelling to Syria, Iraq, Libya, Mali and Yemen. Furthermore, in June 2016, Tunisia’s Ministry of the Interior announced that 2,400 Tunisian jihadists were currently fighting in Syria. 80% of these foreign fighters are members of IS, while the rest appear to have joined Jabhat al-Nusra.

Others reports have however stated that the number of Tunisians fighting for IS is as high as between 6,000 and 7,000, and Tunisia has been identified as the number one source of IS foreign fighters. Some of those radicalised have either returned to Tunisia after travelling to Syria, and some of them have even taken part in terrorist operations. Houssam Abdelli, who carried out the suicide bombing in Tunis in November 2015, had according to some claims travelled to Syria for a short period before returning to conduct his operation.

In light of this, Tunisia’s status as an exporter of jihadis and suicide bombers makes it an important case study. Furthermore, the political situation in Tunisia makes it one of the few countries in the region which allows for field studies and interviews with relatives and friends of suicide bombers, which is why AOAV sent a researcher to the country in the summer of 2016. Detailed descriptions of the Tunisian suicide bombers will be provided as case studies in the appendix.

Tunisians have taken part in global jihadi campaigns ever since the 1980s, which saw several Tunisians joining the Afghan anti-Soviet resistance. Tunisians have since fought in Bosnia, Chechnya, Iraq and Mali as part of various jihadi organisations.

This is perhaps surprising given that Tunisia has since its independence from France in 1956 been considered as arguably the most secular country in the Arab world. However, secularist policies were coupled with the imprisonment of opposition groups, and especially those belonging to the Islamist camp. Under President Zine El Abidine Ben Ali (1987-2011), 265 members of Islamist Ennahda Party were tried on vague and imprecise charges after unfair trials. In August 1992, they received long sentences, with prison terms ranging from 20 years to life behind bars. Moreover, torture detention centres was also widespread and many Islamist activists were forced into exile.

When President Ben Ali was ousted during the Arab Spring protests in 2011, it opened up the door to many of the Islamist forces that had previously been outlawed and persecuted (such as the Ennahda Party) and several political prisoners were freed. Although most were political prisoners, some of them had previously been affiliated with al-Qaeda, such as Sami Essid. Moreover, for the first time in the country’s history, Salafist political parties were allowed to act openly, and many of the interviewees during AOAV’s research in Tunisia noted the increased involvement of Salafists in public institutions.

However, more radical elements of Salafism had also begun to make themselves present. For example, groups like Ansar al-Sharia in Tunisia (AST) began in 2011 to openly promote their activities and to proselytise in poor neighbourhoods in Tunis. AST has been accused of acting as religious police in some neighbourhoods, physically abusing people who violate Islamic values. The Tunisian government has further claimed that the group is behind multiple attacks on the country’s military. Since 2014, restrictions on Salafist groups have increased in Tunisia, which has to some extent made it more difficult for groups like AST to operate in the open. Despite this, AST are suspected for having actively encouraged large amounts of Tunisians to join IS.

There are several possible explanations to how Tunisia has ended up exporting so many fighters to groups like Islamic State and Jabhat al-Nusra. One reason could be the more open policies implemented after 2011, which allowed radical groups to mobilise. Another explanation could be that in the eagerness to drain the swamp of Ben Ali’s bureaucracy, the national security apparatus was weakened, which incapacitated the government from adequately monitor newly formed organisations. In addition, people have testified to the persecution that some Tunisians feel, citing that overtly religious and suspected Islamist supporters are discriminated against in a manner similar to the Ben Ali years.

One explanation that seems to be universally accepted is socio-economic deprivation, as most jihadi recruits seem to come from the poor suburbs of Tunis. Further, studies have shown that a lack of jobs and social services are among the top concerns among people aged 18 and 34, which are also the age group that most predominantly joins jihadi organisations. The study was primarily conducted in Tunis suburbs Douar Hicher and Ettadhamen, where 81% of respondents also said that they knew someone who had travelled to Syria. Moreover, 57% disagreed with the government’s decision to list AST as a terror group. Interestingly, only 29% said that they regularly pray or attend a mosque.

Although these figures are not comprehensive, they epitomise much of the problem with jihadism in Tunisia today. There was widespread belief that economic opportunities would increase after the revolution. However, as that has not been the case and the national unemployment of around 15% is often much higher among recent high-school or university graduates. Many are instead forced to work in ‘low status’ jobs in the country’s informal economy. There is also a sense of inferiority and social stigma. People that AOAV interviewed in Douar Hicher and Ettadhamen said that they are occasionally stopped by police in central Tunis who allegedly tell them to go back to ‘where they belong’, given the perception of criminality that ensues such neighbourhoods. Such sentiments has led to areas like Ettadhamen and Douar Hicher traditionally being a stronghold for Ennahda and other anti-regime forces, both of which seem to have incrementally been replaced by more radical forces.

Jihadi organisations have been very effective in targeting grievances created by lack of economic opportunities in Tunisia, and have according to the people AOAV has spoken with in areas like Ettadhamen managed to recruit youth by offering them a way out of poverty. Besides the salaries that some organisations pay, joining a jihadi group might also function as revenge against the state which has failed to provide opportunities for its citizens. Moreover, given the traditional antagonism between the Tunisian state and conservative strands of Islam, joining a radical Salafist serves as act of ultimate rebellion. Last but not least, groups like IS also offers recruits a standing in which they enjoy status and a sense of fulfilment, which is the direct opposite of what many young unemployed Tunisians feel.

Much of these sentiments and perceptions are found in the case of Houssam Abdelli, who was 28 years old when he detonated himself on the bus in Tunis in 2015. Abdelli was from a poor family, and neighbours and friends that AOAV spoke with said that he was worried about their financial well-being. From Ettadhamen, Abdelli worked as a street seller, selling plants and clothes. According to his friends, he had tried to find a better job, but had had no success. He reportedly drank alcohol and smoked hashish several times per week. Abdelli used to sell his products outside of the El-Guffran Mosque in Ettadhamen, which has become known for its strong Salafi leanings, and it was there his friends say he was convinced by radical clerics to become a jihadi. Abdelli was later arrested due to his affiliation with the mosque, which is likely to have sped up his decision to carry out a suicide attack. It is also believed that Abdelli went to Syria for about three months before his attack, as his friends or relatives did not see him during that period. 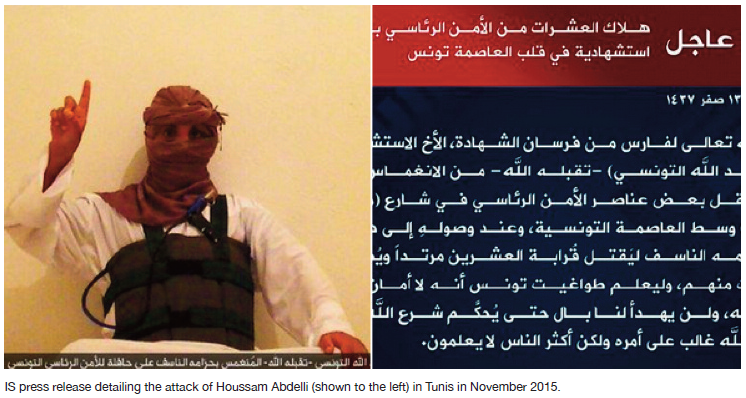 Another Tunisian suicide bomber, Sabr al-Ayari, who carried out a suicide bombing in Baghdad in June 2013, showcases similar characteristics. Ayari was originally from Dubrazville, another poor suburb outside Tunis. The neighbourhood is infamous for its crime rates, and Ayari’s brother was a well-known criminal in the area. Like Abdelli, Ayari was concerned over his family’s financial well-being, and struggled to find a job himself. He was not seen as very religious by his friends and family that AOAV spoke with, but was also not known as a criminal or a trouble-maker. Apparently, local Salafists offered him some money, after which he started to attend his local mosque frequently, where he allegedly became radicalised before travelling to Iraq. Detailed descriptions of both Abdelli and Ayari can be found in the appendix.

It should however be noted that socio-economic deprivation is not always a sufficient explanation. For example, several Tunisian teenagers from middle-class backgrounds in Sousse with relatively comfortable lives have left to join either IS or Jabhat al-Nusra in Syria.

As in many other countries, the cases above demonstrate that presence of radical religious ideas are alone not sufficient to inspire someone to commit an act of terror. Tunisia’s particular history of state repression of Islamist organisations has made jihad the ultimate rebellion against the state, which many young Tunisians feel disappointed with. Moreover, the conflict in Libya has increased the presence of jihadi organisations close to the country’s borders, something which may have revitalised Tunisia’s own radical groups. However, the reality is the Tunisia’s production of suicide bombers does not have concise answers, but is as always a matter of assessing each case individually. For further analysis, see the appendix on Tunisian suicide bombers.