Like Syria and Libya, Yemen has found itself facing violence in the aftermath of political change in the country after the Arab Spring. The chaos in the country has been taken advantage of by groups like AQAP, and more recently, IS.  Moreover, the Houthi insurgency and ensuing Saudi intervention have provided the perfect setting for jihadi groups to advance their positions, often taking advantage of the despair and grievances created by the war. AQAP currently holds large swathes of territory in Yemen, often using their suicide attacks to attack Yemeni military targets. IS has also used it as a military tactic, but has in general targeted civilians to a larger extent. IS has also displayed an ability to adopt more sophisticated tactics in regards to suicide bombings. 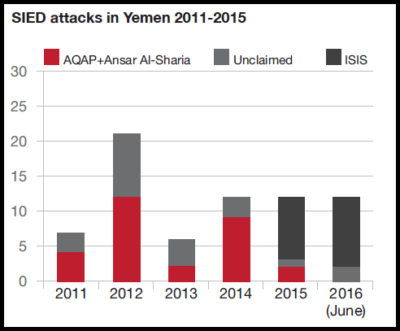 AOAV has registered 54 SIEDs in Yemen between 2011 and 2015, as recorded in English language media. Even though not all attacks have been claimed by their perpetrator, all suicide bombings that took place before 2015 are suspected to have been AQAP perpetrated, leaving just two attacks not clearly attributable. However, IS has since its arrival in Yemen in 2015 claimed a majority of the attacks.

Attacks committed by AQAP
There have been 49 suicide attacks that AQAP (including Ansar al-Sharia) has either claimed, or that have been attributed to them in the period noted above. 82%, of these attacks were directed at military facilities, government buildings, militia checkpoints or politicians. The other nine were directed at Houthi gatherings, a hospital, a school, a market, a protest and a Sheik’s residence. As a result of these attacks, from the 1,723 people reported killed or injured in them, 44% were listed as civilians. AQAP has to some degree been inspired by Jabhat al-Nusra and the group’s governance model, which is why civilian areas are less frequently targeted.

In terms of suicide attack locations, the southern Abyan Province was the most frequently targeted, with 12 bombings. Aden, the acting capital for the Hadi government, was the second most targeted with eight bombings. The southern provinces of al-Bayda and Hadramawat both saw seven attacks each, and Sanaa, the capital which has been taken by the Houthis, saw four. Less frequent attacks were carried out in other parts of the country.

Attacks committed by IS
IS has claimed 19 attacks since its arrival in Yemen in 2015, although a majority of these have occurred after 2015 and therefore after AOAV’s data collection period. 69% of the attacks have been directed at military facilities, government buildings, militia checkpoints or politicians, and 31% at Shia mosques. Seven of these bombings included coordinated attacks of more than one device. As a result of these attacks, from the 1,203 people reported killed or injured in ISIS attacks, 62% were civilians.

Regarding the locations for IS bombings, Aden was the target of seven attacks, Sanaa saw six attacks, Hadramawt saw five and Al-Bayda was witness to one.

IS in general seems to use a more sophisticated strategy in their use of suicide bombings than AQAP, and seems to be using more complex attacks. For instance, on October 5, 2015, IS used four suicide bombers when they targeted political gatherings being held between Saudi, Yemeni and Emirati officers at a hotel in Aden, killing more than 15 troops.

Yemen’s history with suicide bombings goes back to the year 2000, when Al Qaeda carried out its first known suicide attack. The bombing targeted the USS Cole destroyer, which was at the time being refueled in Aden’s harbour. Seventeen American soldiers were killed and 39 injured. In the following years, Yemen became a fertile ground for suicide attacks.

This was partly down to two reasons: its geographic location and political situation. Jihadis consider Yemen part of the greater Arabian Peninsula, rejecting any manmade borders. Moreover, the political conditions in Yemen have made it the ideal place in the region to carry out a jihadi insurgency. AQAP’s Abu Musab al-Suri has himself alluded to this, citing Yemen as the ideal location for mounting a jihadi insurgency in the organisation’s Inspire Magazine.

Moreover, the presence of foreign troops in Yemen has given jihadists justification to launch operations in the country, not only making use of their local followers, but also enticing many foreign fighters to carry out ‘martyrdom operations’ there. In 1992, Al Qaeda carried out in Yemen what is believed to be its first ever attack against the United States by bombing two hotels intending to kill US Marines. Though unsuccessful in killing any US troops, Osama Bin Laden took credit for the attack, attributing it as the reason why the US left Yemen soon after.

On October 12, 2000 Al Qaeda launched its suicide attack on the USS Cole, and in June of the next year, as-Sahab, the Al Qaeda media branch, released a tape featuring Osama bin Laden claiming the bombing and encouraging similar attacks.

In 2009, Al Qaeda in Yemen and Saudi Arabia merged, creating Al Qaeda in the Arabian Peninsula (AQAP). Later that year, the United States began its drone campaign in Yemen against AQAP targets. These attacks were commanded by the CIA and JSOC (The Joint Special Operations Command), and not the military; such a directive gained international criticism for their targets and civilian casualties. On September 30, 2011, a joint CIA-JSOC drone attack killed Yemeni-American Anwar al-Awlaki, and in December 2013, a wedding was targeted killing 15 civilians.

All of these attacks helped Al Qaeda both to reinforce their propaganda strategy and to attract young fighters, including some even from the West, in their fight against the United States’ intervention in the region.

During the years that followed, Yemen found itself trapped in political chaos. The 2011 uprising saw the ousting of President Saleh, and his replacement by his vice president Abdrabbuh Mansur Hadi. The Houthi rebels, Shia Muslims who opposed the new government, went on to take effective control of the north of the country against Hadi’s government, and the tribes from the South saw their opportunity to re-claim their independent state. In this political turmoil, Al Qaeda took control of the east part of the country claiming their own Emirate, and in January 2015 a Yemeni official confirmed that IS had a presence in at least three provinces in the same area and was actively recruiting.

In March, 2015 a Saudi-led coalition launched air strikes against the Houthi rebels, stating that it was defending the legitimate government of President Hadi. However, the coalition strikes have seen more civilian than armed casualties, bringing further devastation to an already poor and desperate population. Inevitably, this intervention was to further infuriate elements of the population, and resulted in more foreign fighters travelling to Yemen, searching for a ‘legitimate’ cause for martyrdom.

As shown, two groups claimed responsibility for those suicide bombings carried out in Yemen over the past 16 years: AQAP (and its offshoot Ansar al-Sharia) and more recently IS, which has been responsible for the majority of attacks since its arrival in Yemen in 2015. Both AQAP and ISIS have used their English media outlets and magazines, Inspire and Dabiq respectively, to spread their message as well as to lure foreign fighters and prospective suicide bombers to Yemen. Other means of propaganda have been video releases and press releases and statements on the groups’ Arabic language communications channels.

In the very first issue of AQAP’s magazine Inspire in 2010, Ayman Al-Zawahiri called upon Yemen’s tribes to take action: 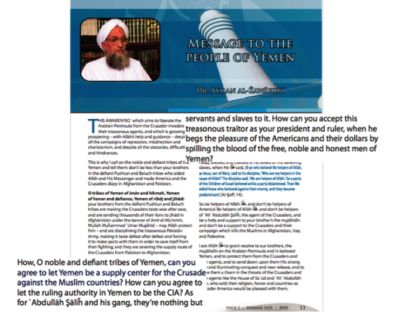 In a later issue from 2010, Anwar al-Awlaki, the American and Yemeni Sheikh who was later targeted and killed by a drone attack, was to continue on this theme of rising up – addressing the issue of the American drone attacks and the loss of innocent civilian lives from them.  His call was to action: “…we have just seen in Yemen the death of 23 children and 17 women. We cannot stand idly in the face of such aggression, and we will fight back and incite others to do the same.”

More recently, the expansion of the Houthis in the North was used as another justification and recruitment tool in the case of martyrdom, a call that was often framed in a very sectarian language.

In addition, in the same issue of Inspire, AQAP dedicated a whole article on the justification to target non-Muslim civilians and Yemeni soldiers, claiming that they were legitimate targets due their affiliation with Western governments that were responsible for the slaughter of Muslim civilians in Palestine, Afghanistan and Iraq.

IS in Yemen
IS in Yemen has advocated the same reasons to justify their actions and encourage the martyrdom of its followers as AQAP. However, IS have a more aggressive approach towards the killing of civilians, with a focus in targeting Houthi rebels and supporters, accusing them of being murtaddin or apostates. Under this pretext, in under two years of recorded attacks in Yemen, IS has targeted six Houthi mosques with suicide bombings. And in November 2014, IS dedicated an entire section of the propaganda magazine Dabiq, to Yemenis who carry out suicide attacks on Houthis:

“Sadly, the dominant methodology in Yemen, especially after the so-called “Arab Spring,” was one that prohibited the targeting of the Rāfidī Houthis because they were allegedly “Muslims” excused due to ignorance! (…) For these reasons and others, Shaykh Abū Muhammad al-‘Adnānī (…) said: ‘As for Yemen, then O alas for what has come upon Yemen. Alas! Alas for Sanaa. The Rafidī Houthis have entered it, but the car bombs have not roasted their skin, nor have the explosive belts and IEDs severed their joints. Is there not in Yemen a person who will take revenge for us from the Houthis?’”

In March 2015, shortly after the publication of this article, IS carried out a major attack in Yemen, simultaneously targeting two mosques using four suicide bombers. As a consequence, 141 people were killed and 345 were injured; all being civilians except for 4 security personnel. Dabiq promptly published the pictures and a text praising the attack.