Afghanistan – the country with by far the lowest GDP among the top five worst affected by suicide bombings – has one of the least developed economies in the world, even after huge infusions of foreign aid in the post-invasion period. Iraq, on the other hand, has a highly developed and profitable oil sector.

Among those countries worst affected by suicide bombings, only Pakistan demonstrates a correlation between an 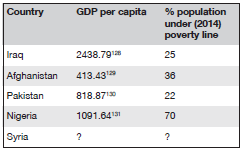 increase in GDP and a parallel decrease in SIED attacks between 2011 and 2015.

Afghanistan has, on its part, seen a decrease in both suicide attacks and GDP.

In Somalia, the (albeit very low) GDP has consistently increased whereas SIED attacks have remained on similar levels throughout the years looked at.

In Nigeria, on the other hand, GDP plummeted in 2015, which was the year that was by far the worst affected by suicide bombings.

There is no reliable GDP data on Syria, but it would be logical to assume that a major motivator behind suicide attacks is conflict rather than poverty.

Interestingly, GDP fluctuations have correlated with SIED attack levels in Iraq in an unexpected manner, as both rose from 2011 and peaked in 2013 before dropping. This suggests that SIEDs may increase together with general economic development, but also demonstrates that economic development is far from the only factor having an impact on a country’s exposure to suicide terrorism.

Another interesting detail in the analysis is that GDP levels in both Morocco and Tunisia, two countries that have seen many of its citizens join IS, plummeted after 2014. This coincides with rapid IS expansion, and could partly explain why so many young Tunisian and Moroccans decided to join. 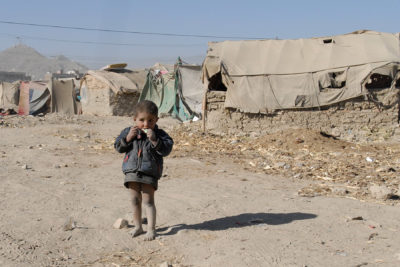 Afghan refugee child, taken in Kabul in 2010. By DVIDSHUB, CC BY 2.0, http://creativecommons.org/licenses/by/2.0, via Wikimedia Commons

Although making sweeping connections between the economy and terrorism does not provide a comprehensive view, correlations between certain kinds of economic growth and suicide terrorism have been found. For example, a study by Seung-Whan Choi at the University of Illinois at Chicago has demonstrated links between increased industrial economic growth and suicide terrorism. This is largely due to the increased security measures that industrially growing economies can afford to make, thereby forcing terror groups to apply the more clandestine and infiltratory method of suicide bombings. It should be mentioned that the study notes that agricultural economic growth does not lead to increased suicide terror. This could explain why Iraq with its oil economy, and the entailing presence of substantive security measures, has seen so many suicide bombings both in recent years but also in the aftermath of the US invasion.

Of course, an approach which focuses solely on the level of the country ignores huge amounts of variation within the countries themselves. When examining Nigeria, for example, we find that the north-eastern provinces – the heartland of the Boko Haram insurgency – are markedly underdeveloped compared to other parts of Nigeria. It is also suffering, perhaps more directly than other regions, from resource shortages and the damaging effects of climate change. However, previous AOAV reports on Nigeria shows that whilst this can help explain the underlying grievances fuelling the Boko Haram insurgency, there is again no direct correlation. Many other areas with similar levels of underdevelopment are not facing the threat of suicide bombing.

All of this said, economic factors may play a number of indirect or distal roles in the process that ends with the self-activation of a human detonator, whether it is for the individual or as cause of conflict.

In general, however, economic explanations are only one piece of the puzzle. The Tunisian case studies that AOAV conducted on site (see appendix) found that many suicide bombers were indeed poor, but testimonies also raised issues such as disenfranchisement and alienation, suggesting that suicide bombers experience something more personal than simply a lack of financial resources that turns them into suicide bombers. One should also keep in mind the increased usage of suicide bombings as a method of warfare by groups like IS and Jabhat al-Nusra, which would indicate that it is primarily conflict that is driving suicide attacks.

The stereotypical image of the suicide bomber is of a young man with no education and no economic prospects, rendered desperate and so stupid he easily falls prey to the corruption of a Machiavellian Mullah. In practice, the picture is much more mixed. Detailed data from older surveys of suicide bombers found that they were both economically and educationally diverse – and are, in many cases, both better-educated and financially better off than the average within the population from which they are drawn.[i]

A study of factors correlated with support for suicide bombing in various Muslim-majority countries found that in some places higher levels of education were a statistically significant predictor of support. Though, of course, this is not the same as being willing to carry out a suicide bombing but may still be relevant.[ii]

One possible explanation for this phenomenon rests in the idea of ‘relative deprivation’. An individual may be a relatively privileged member of a population in what we might call ‘objective’ terms – if they are rich, for example, or better-educated, or have more obvious prospects than other members of their community. 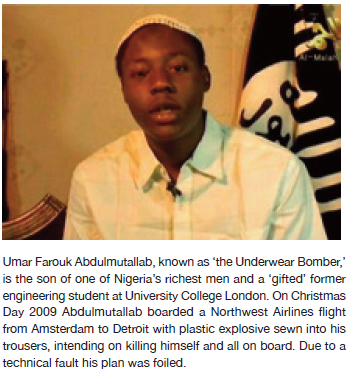 This doesn’t, however, mean that they see their position in the world (or their community’s place in the world) as just. The idea of ‘relative deprivation’ (deprivation as a non-absolute, subjective measure) was used convincingly by Edward Sayre in the Palestinian context, to in part explain why suicide bombers with apparently bright futures were blowing themselves up for political causes.

Sayre suggests that Palestinian suicide bombers see their position more in terms of the perceived deprivation and unjust treatment of their group as a whole – not solely in individual terms.[iii] This lines up with other research, which has suggested that experiences of discrimination and a sense that Islam is under threat are often predictors of support for suicide bombing.[iv] The idea of being under threat is often pumped out in slogans like those discussed above, but can as this demonstrates of course be rooted in an individual experience of discrimination.

Another possible suggestion is that – at least in some countries – the educated may be more engaged with political issues, particularly international ones.[v]

Whether this general trend holds for suicide bombers signing up for IS, for example, is less clear. In reality, the sheer scale of modern suicide bombing and the experience on the ground in Syria and Iraq – or indeed Nigeria or Afghanistan – makes it practically impossible to find out the identities of most suicide bombers in these countries.

Generally speaking, it is only possible in isolated cases – and particularly when the bombers target other countries – to gain a sense of who the bomber is. If foreign suicide bombers are reflective of foreign fighters more generally – which we have no reason to assume they are – then data suggests they are frequently from less well-developed areas of countries. Many of those travelling from Europe have criminal records.

Nonetheless, even with foreign fighters, it is impossible to generalise – if there is any commonality, it is that in most countries of origin relatively delimited areas provide the majority of those going to fight for IS. These areas all have their own, very specific, very local, very contingent environments which facilitate or encourage the spread of jihadi ideology or the recruitment of their young people to IS.[vi]

Most Pakistani Taliban suicide bombers are apparently from a quite delimited area of the chronically underdeveloped FATA area, which may be a point in favour for the relative deprivation theory.

Nabil Fadli, the bomber who carried out the Istanbul attack of January 2016, was from a relatively impoverished background – but he was also a successful university student. The Paris bombers, on the other hand, were all uneducated and poor. Whilst little information is available on the British jihadis who have launched suicide attacks, IS recruits in general from the UK include professionals, graduates, university students and A-level students (17-18). Some of them were relatively financially successful whilst others were poor. There do not appear to be features distinguishing them from other recruits not intending to become suicide bombers.

An in-depth examination of IS recruits will be provided later in the report.

At least equally important, is the link between the economy and armed conflict. There is an intuitive link between economic hardship and anti-state militant activity. A link between poverty, economic growth and civil war has been demonstrated by much academic research. Additionally, a quick comparison of countries which have low economic indicators, like income and percentage of the population below the poverty line, alongside countries suffering from insurgencies shows an unsurprising correlation.

Whilst obviously, as previously mentioned, there are suicide bombings launched by individuals with few solid links to groups – international or otherwise – the vast majority of suicide bombings take place as part of a strategic campaign orchestrated by an insurgent organisation. These organisations, regardless of their own positions and aims, often feed off a sense of political or economic grievance. 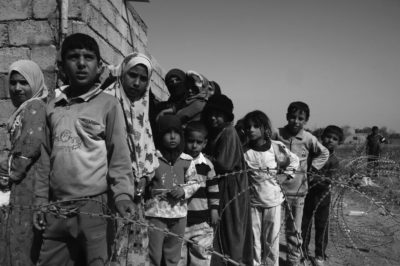 Al-Qaeda in Iraq, for example, managed to manipulate the grievances of marginalised Iraqi Sunnis in the northwest of the country. These same grievances helped to make northwest Iraq a comfortable foothold for a new generation of AQI which ultimately developed into IS.

In Nigeria, economic concerns surrounding the struggle for resources form a core part of narratives on the underlying reasons for the Boko Haram insurgency. Similarly, the Pakistani Taliban are fuelled by socioeconomic despair in the Pashtun tribal belt. In a study by International Alert on the explanations for Syrian recruitment to IS and other extremist groups, economic factors – the lack of jobs or any financial prospects – were frequently mentioned.[vii]

The reality of modern conflict and globalisation means that now more than ever, it is possible for fundamentally local grievances to take on an international dimension. Whilst the Taliban and Boko Haram operate within relatively restricted geographical areas, IS maintains a thoroughly internationalist model, attempting to attract fighters and establish affiliates (or ‘provinces’) worldwide.

A study of leaked IS personnel documents, finds that the majority of foreign fighters travelling to join IS come from very specific regions of source countries – often ones with economic grievances with the central government.

The economic drivers of a given conflict cannot be generalised. Although there are certainly similarities, local conflicts and disputes are exactly that – local, and thus contingent. Substantial bodies of work already exist on the underlying drivers of given conflicts, although much of what exists on northern Iraq, for example, dates from the occupation period and more research is desperately needed. Addressing underlying causes of conflict in places like northern Iraq is a key part of undermining and neutralising the groups launching suicide bombings and ensuring that a military solution – which is likely to only be temporary and resource-intensive – has lasting positive results.

[vi] Nate Rosenblatt, “All Jihad is Local: What ISIS’ Personnel Files Tell Us About Its Fighters,” New America, July 2016.