Psychological explanations are important for understanding the personal motivations for suicide bombing. It is well documented that no single psychological profile exists that can explain the motives of all suicide bombers. Organisations channel diverse personal motivations, which can only be understood in the socio-political context of the bombers themselves. Extensive academic work has demonstrated that feelings of honour, redemption, heroism, alienation and revenge all factor into an individual’s choice to carry out a suicide bombing. The significance of each may change over time; equally only one of these states may matter to the bomber. 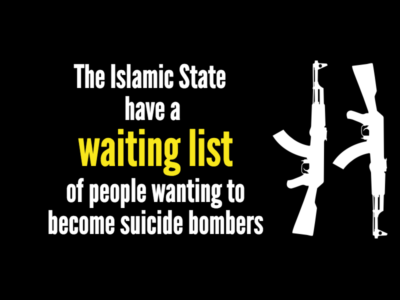 With the exception of a few cases, there does not seem to be an apparent connection between suicide bombing and personality disorders. Typically, most attackers are psychologically normal and well-integrated into their communities. Of course, a percentage of bombers demonstrate suicidal tendencies; studies lean towards about 10%, but can go as high as 30%.[i] Even this is context specific. Tajik suicide bombers tend to more likely to suffer a personality disorder, whilst those who are Palestinian do not.[ii]

Suicide is obviously an integral part of suicide bombing, but the nature of suicide bombings is fundamentally different from ordinary suicides.  Ordinary suicides are typically motivated by personal catastrophe, despair and psychopathologies that lead people to believe that their lives are not worth living. By contrast, suicide bombings fit into a category of “altruistic” suicidal actions, as the actions are taken by an individual who values his/her life as less than that of the group’s honour, religion or some other collective interest.[iii] The cultures of organisations that promote suicide bombing reinforce this idea. As we have seen above, historically most jihadi propaganda has avoided attempting to religiously justify suicide. Instead it has focused on the virtues of martyrdom for the individual and the community.

The Centre on Religion and Geopolitics data demonstrates that references to honour – linked with martyrdom – and solidarity with the community appear in 68% of IS, AQAP and Jabhat al-Nusra propaganda. Advocacy on the part of the oppressed Muslim community appeared in 27% of the material. Such advocacy is often framed in terms that indicate its importance to individual mujahedeen.[iv] For example, one AQAP statement claims, “It is crystal clear that all jihadi attacks on the West came as a belated reaction to the tremendous Western oppression of Muslims.”[v] Jabhat al-Nusra and IS have released similar statements.[vi]

In the martyrdom videos of the eight individuals associated with the failed 2006 Transatlantic Aircraft Plot, three explicitly mention they were motivated to defend the umma, even at the cost of their lives. Waheed Zaman discusses striking back at the US and UK because they have invaded Muslim counties, killed Muslims and supplied weapons to the enemies of Islam. Similarly, the Syrian bomber Abu Bilal al-Homsi had played an active role in anti-Assad activities since 2011 and fought with a number of rebel groups before joining IS. According to his friends and family, during all those years his primary motivation was to defend his local neighbourhood in Homs.[vii]

Linked with suicide for the community is martyrdom for the sake of one’s companions. A review of Dabiq’s military operations section shows that over half of all suicide bombers conducted their attacks as part of a group. As touched upon earlier, placing individuals in tight-knit groups like this often creates a ‘band of brothers’ effect, similar to the one seen with conventional soldiers. In these situations, fear of letting one’s comrades down can become greater than fear of dying. Of the 105 attacks described in Dabiq, 19 were also combined operations in which bombers played an important role alongside more conventional forces, further exacerbating this desire to not let down comrades.

Humiliation and honour play a key role for organisations and individuals in shaping the cult of suicide bombing. Humiliation is a complex emotional experience that operates on both an individual and communal level. It is always historically and culturally grounded in perceptions of self-worth and dignity. The evidence suggests that violence, torture, occupation, harsh repression, poverty, the violation of honour codes, helplessness and collective grievances can all act as major sources of humiliation and help fuel suicide bombing campaigns.[viii]

For Western fighters and suicide bombers, this may be ‘humiliation by proxy’ generated by media coverage of conflicts involving Muslims, particularly in Iraq and Palestine. For example, Abdulla Ahmed Ali, a British Muslim who continuously refers to the humiliation experienced by Muslims at the hands of Western powers, states, “we’ve warned you so many times to get out of our lands, leave us alone, but you have persisted in trying to humiliate us, kill us and destroy us.”[ix]

While exact sources of humiliation are context specific to the organisations and individuals involved, jihadi propaganda from all sources refers to it frequently. The emotion is a common theme for organisations that engage in suicide bombing campaigns from the LTTE to IS. This theme is present in 40% of IS propaganda, 31% of AQAP’s and 23% of Jabhat al-Nusra’s.[x] The power of this message is that it already plays on the widely held belief that there is a conspiracy against Muslims worldwide. A 2007 survey found that two-thirds of respondents in Egypt, Pakistan, Morocco and Indonesia either did not know or thought the US or Israel was responsible for 9/11. A further three-quarters felt it was important to “stand up to America and affirm the dignity of the Islamic people.”

Certain sources of humiliation such as mass interrogations, random house searches and, most famously, the indignities committed by US prison guards at Abu Ghraib had a direct impact on suicide bombing rates. In the months after the publication of the abuse photographs, the number of Iraqi suicide bombings increased dramatically.  General Stanley McChrystal said that, “In my experience, we found that nearly every first-time jihadist claimed Abu Ghraib had first jolted him into action.”[xi] This again demonstrates that jihadi propaganda that speaks of humiliation can easily tap into existing and even legitimate individual grievances. For someone going suffering humiliation, whether in an Iraqi prison or “by proxy”, jihadi groups may even appear as the only organisation showing any sort of understanding to one’s personal frustration.

Linked with humiliation is the opportunity for redemption. Using religion at multiple levels, the loss of dignity is often framed as a sin for which martyrdom is the answer. In martyrs’ videotaped statements, both personal and collective redemption is frequently mentioned as a motivation for attacks. 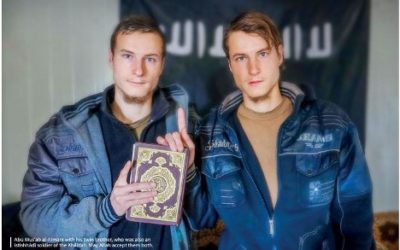 Organisations also play on this desire for redemption to encourage further recruits to become istishhadi. Dabiq, issue 9, includes the story of Abu Mus’ab al-Almani, an ex-German soldier who fought for coalition forces in Afghanistan before joining IS. In April 2015, he drove a truck containing seven tons of explosives into the headquarters of the 4th Regiment of the Iraqi Army, northwest of Baghdad. The Dabiq section on him constantly refers to how he once fought against Muslims but by becoming a martyr had redeemed himself in the eyes of Allah. His “name would now be written – by Allah’s permission – amongst those whose past had been tainted with Muslim blood and would atone for it by embracing Islam and fighting for the cause of Allah until they were killed.”

Along with a chance for redemption comes an opportunity to be a hero, which is a desire also highly visible in several suicide bombers’ video-taped wills. The asymmetry in power faced by most suicide bombing organisations is extreme. As Abu Musab al-Zarqawi regularly stated, his men “faced the strongest and most advanced army in modern times.”[xii] During a debriefing, an al-Qaeda operative is quoted as having compared himself to the Rebels in Star Wars using whatever means available to fight against a technologically advanced invader. These are romantic notions and have a part to play in motivating some individuals to become suicide bombers. For instance, the failed bomber Ibrahim Savant states in his martyrdom video, “Mujahedeen, for years I’ve desired to meet you, to walk the paths you’ve walked, to sacrifice what you have sacrificed. Now, Allah has honoured me with an invitation.”

Whatever the reality, the popular image of a young martyr is of a powerful, committed hero, bravely fighting the enemies of God. Recent suicide bombers may not be as glorified as they were in the past, but jihadi organisations still lionise the concept, and suicide bombers often strive for heroic status.

As eluded to in the wills of suicide bombers above, the personal histories of suicide bombers often include events for which an individual might choose to seek revenge. These events could be threats, assaults, the loss of family members and friends, or even more abstract circumstances such as communal grievances or injustices – in these cases, the dynamics of humiliation previously discussed factor heavily.

Psychological research on vengeance reveals that individuals are often surprisingly willing to make substantial sacrifices in order to achieve revenge. From a demographic perspective, men tend to hold more positive attitudes towards vengeance than women. Young people have also been found to be more willing to act in a vengeful manner than older individuals.[xiii] When this intent is manifested through suicide bombing it has the further effect of transforming the bomber into a victim of the attack and so giving their cause additional moral authority.

In normal circumstances, the desire for revenge would gradually subside and pass. However, in conflict-ridden environments with a culture and infrastructure of suicide bombing, grievances and injustices can more easily become a catalyst for seeking martyrdom. Research on 67 Palestinian suicide attackers showed that almost all had a history of injury, arrest, or the death of a family member by the Israeli Defence Forces.[xiv] Revenge also figured highly for the Syrian bomber Abu Bilal al-Homsi who wished to strike back at Alawites for the siege of Homs in 2014. Similarly, the failed transatlantic airline bombers in 2006 all mentioned vengeance implicitly and explicitly in their martyrdom videos.