To talk about ‘combatting suicide bombing’ in general terms is impossible. A suicide bombing or suicide attack is a technique which can be used tactically or strategically for many different purposes in different conflicts or military theatres.

The reality is that it is almost always possible to find individuals who are willing to kill themselves for a cause – whether it is because they are depressed and want to end it all, because they are angry and politically disaffected, or simply because they have a strong ideological commitment to something bigger than themselves. Counter-radicalisation efforts and investment in mental health may in some cases help reduce the risk of lone wolf attacks or recruitment to international organisations, but the time when these measures might have had a positive effect in the areas worst hit by suicide bombing are long gone.

The only difficulty then lies in operational detail – manufacturing a suicide vest or car bomb and then launching the attack. As it stands, this process is hugely facilitated by the diffusion of knowledge and expertise through international jihadist networks. Breaking down links between jihadist groups and preventing the diffusion of this knowledge is an important first step to preventing further spread of infection – and to preventing the recruitment of foreign suicide bombers and fighters more generally for those organisations that make use of international man-power. Nonetheless, any organisation with the practical know-how to build an IED can probably develop a suicide vest without too many technical difficulties, and so this cannot be the be-all and end-all of efforts to counter suicide bombings. 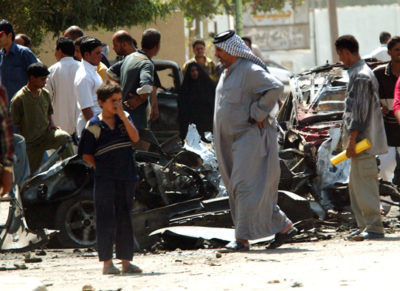 Local residents examine the wreckage of vehicles in the aftermath of two car-bomb attacks at a bus terminal in central Baghdad, Iraq, at 7:50 a.m. Aug. 17. U.S. Army photo

Security responses to reduce the ability of suicide bombers to take such a huge toll are possible stop-gap measures for military organisations – improving the security of areas with large concentrations of people, developing technology to detect explosives carried by suicide bombers and so on. These measures are important and in many cases are already in place – resulting in many suicide bombers being stopped at checkpoints and causing far less deaths and injuries than would otherwise be the case. But they will only reduce the effect of the suicide bombings already being launched.

Given that stopping suicide bombings per se – in terms of stopping its supply – is very difficult, the question then generally becomes one of reducing the ability of groups to launch suicide bombings and establishing long-term stability. The major hotspots – Iraq, Syria, Nigeria, Afghanistan, and Pakistan – the groups using suicide bombings are, ultimately, insurgencies which depend on a local base of, if not support, ambiguity and resentment towards the state. Without this base, these groups would find their ability to carry out attacks significantly reduced. The question then is how to deal with the sense of disenfranchisement found in these areas and win – or buy – the loyalties of local communities in the fight against these organisations, without the credit for those concessions being given to the organisation (unintentionally strengthening their hand).

This may seem like an ambitious goal, but has been successful in the past – in fact, it was the whole basis of the Iraqi Saḥwa (‘awakening council’) movement, which mobilised the northern Sunni population against al-Qaeda in Iraq in the late 2000s. The Saḥwa and the accompanying military response effectively crushed AQI. It was the breakdown of the post-Saḥwa order and the perceived or real return of pro-Shia sectarian government in Iraq (and with it all the return of sectarian politics that that involved) that led to the resurgence of AQI in 2013.

Of course, there are groups for which there is no such obvious constituency, as was the case with al-Qaeda central (and as will probably be the case with IS if their territory is reduced). These groups require a different response. But at present the vast majority of suicide bombings taking place worldwide are not of this kind.