Kashmir has been the epicentre of conflict between India and Pakistan since the lines of partition were drawn in 1947. Historically, there have been four wars between the two nations; in 1947-48, 1965, 1971, and in 1999. The most recent of these saw over 30,000 soldiers and civilians being killed. Besides these wars, both nuclear nations have been continuously at low-level conflict, with skirmishes breaking out on a regular basis.

In recent years, ground operations have seen attacks on civilians and soldiers by both countries’ forces. Explosive weapons, including grenades, mortars and other forms of shelling have caused casualties on both sides. In total, Action on Armed Violence (AOAV) recorded 1,091 deaths and injuries from explosive weapons in Kashmir, (in both Indian and Pakistan-administered areas,) according to English-language news reports between 2011 and 2016. Of these, 69% have been civilians.

Beyond the immediate harm, the explosive violence has also been responsible for significant damage to vital civilian infrastructure. And, the destruction and fear caused has had palpable impacts on civilian life, particularly for children.

Shelling along the line of control between Pakistan and India has caused major disruptions in education for both countries. In 2014, heavy shelling by Indian forces on the Sialkot border villages in Charwar sector caused 120 government schools to shut, and caused heightened levels of fear and distress for local communities. Further unrest in 2016 led to the closure of nearly 300 schools in Indian villages of Jammu, Samba and Kathua districts, which are situated within 2.5 km of the border. The order came after there was heavy shelling by Pakistani forces in the area leading to the deaths of 14 civilians.

On the November 12th 2016, mortar fire by Indian troops destroyed hundreds of houses and schools in the Nakyal and Battal sector of Azad Jammu and Kashmir (AJK). This led to the immediate closure of 25 girls’ and 34 boys’ schools in the Nakyal sector. On December 16th 2016, a school van was hit by shelling, killing the driver and wounding eight children. On the July 25th 2017, a school building in Poonch was heavily damaged due to shelling by Pakistan. The week before, 25 schools closed due to ceasefire violations.

Further disruptions in acquiring education have also been exacerbated by syllabus curtailment, mass copying, lenient marking and lack of teacher accountability – all linked to the prolonged shutdowns.

The closures and violence seen in schools has led to student uprisings and protests, as Kashmiri students see their education put at risk and being militarised. In April 2017, hundreds of students from Sri Pratap College led a protest against Indian forces. Soldiers then used tear gas and pellets on the students. At least 50 college students were wounded, with many suffering pellet injuries to their eyes. 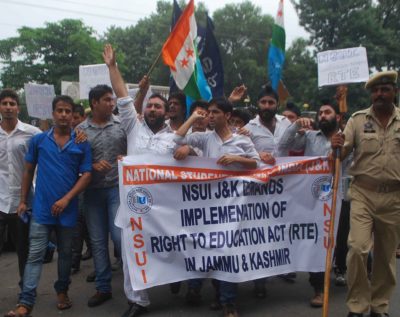 Protest in Jammu and Kashmir for implementation of the Right to Education Act in 2013.

A study by Chinar International in 2016 found a deep sense of pessimism regarding education in terms of quality and outcome. The continued violence across the region has caused many schools to go neglected. This has left some school buildings in Kashmir left without proper sanitation facilities, water and boundary walls.

This situation has continued to worsen. Alongside the increased levels in shelling: access to a boundary wall fell by 7% for middle schools in the state between 2013 and 2016; the availability of toilets for students of secondary and higher education also worsened; and the numbers of pupils per classroom also increased heavily in the same time frame, as students moved to schools where they were less exposed to impacts from explosive violence.

In Indian occupied Jammu and Kashmir in 2016, schooling for the year was only conducted for a total of four months. Many classes had learnt less than 50% of the curriculum for the year. Much of this damage to tuition was considered ‘irreparable’.

Recognising the loss of education due to these school closures and the consequential disruption to education, the Indian government ultimately felt it necessary to relax term two examinations from classes 1st to 8th. This loss of learning can impact students’ future prospects in regard to jobs and income. The extent of the damage could be detrimental to the future of a whole generation. However, it is not just the closures alone that impact students.

Coping with mental and physical health

In Kashmir, many schools are not equipped to provide for someone with a physical disability, and therefore children left with injuries from explosive violence may be denied schooling.  A 2014 report on the “Inclusiveness of educational facilities for children with disabilities in AJK”, found that only 9% of sampled schools in AJK had ramps at entrances for children, only 16% were accessible from the road, and only 3.5% had ramps inside the school. Additionally, 81% of classrooms did not have appropriate desks for children with disabilities. Facilitative and supportive sitting arrangements were only available in 32% of the classrooms.

In many areas, the constant violence or threat of violence has also led to the problems with mental health, as well as stunted intellectual development and physical growth. This is worsened by a lack of safe spaces for children.  A 2014 study compared the mental health of children in Srinagar, Kashmir, to those in Kolkata. The students in Kashmir were found to be more than twice as likely to suffer from poor mental and emotional health than those in Kolkata. This was attributed to the conflict in the region and the instability caused.[1] Given that the violence has worsened since 2014 and that the students examined were from middle-class backgrounds, it is likely that a similar study conducted today amongst a wider variety of students would show even worse results.

On both sides of the disputed border, areas surrounding schools and other populated areas have become increasingly militarised, with military camps often found close to school buildings and campuses. The militarisation of these areas can lead to a negative psychological impact on children which can cause higher dropout rates and has certainly been the case in Indian occupied Kashmir valley where many children feel scared of the school’s proximity to military camps.

A research study conducted by the Working Group on Peace, Conflict and Education at Colombia University in 2013, found that 79% of the military camps were at a distance of less than 1km of the schools examined. Some of these schools even shared common borders with the camps. The children in these schools were reported to feel threatened and scared whilst in the presence of the military personnel and due to the closeness of the camps that were likely to be targets of explosive weapons. The children know that this proximity puts them at greater risk of shelling.

The explosive violence in the region has also had additional impacts on girls, which has had a negative effect on the efforts of both countries to improve access to education for females. In 2004, India began an initiative called Kasturba Gandhi Balika Vidyalaya (KGBV); it aimed to establish residential schools for girls in all districts that have a low female literacy rate. The central government also decided to grant financial incentives and scholarships for the girls born to families living below the poverty line. Across the valley in Pakistan’s AJK, the Malala Education Fund was set up in 2013 to promote girl’s education with support from the AJK Department of Education and UNESCO. The fund would provide stationary and lunch to female primary school students whilst also constructing boundary walls for vulnerable schools.

Despite these recent actions by India and Pakistan to encourage education for girls, the unrest in Kashmir has further exacerbated the divide in education levels between boys and girls. Many parents see an increased risk for their daughters, when schools in areas have experienced shelling. In 2013-2014 there were 296,535 girls enrolled in education within urban areas. This figure fell to 96,896 girls in 2015-16, amounting to a 67% decrease in girls in education.

The closeness of military camps also puts girls in increased dangers, with the presence of army personnel meaning girls are more at risk of sexual violence, abuse and other forms of harassment. This leads to a further rise in the dropout rates in these schools for girls as they seek to avoid this.

“Conflict situations invariably take a toll on education: through physical destruction/damage to education facilities; loss of teaching staff (e.g because they are victims of conflict, out of fear, breakdown of service delivery structures); physical and psychological trauma experienced by students; and the general challenges involved in trying to carry on a ‘normal’ life with ever present threat of violence. Denial of education opportunities often means denial of future for young people- thereby perpetuating the negative effects of conflict.”- Ifat Idris (Former Capacity Development Specialist for the Asian Development Bank)

Safety at school and accessing a safe education are vital to all children but especially those living in areas of conflict. To those in living in these areas, schools should provide normalcy, stabilisation and safety, in addition to learning, allowing children to better cope with the wider harm that the region suffers.

The state of education in Kashmir, due to the decades of conflict, is in a state of dismay. Whilst students and their parents, have taken some matters into their own hands, given the impact such violence between the two countries over the region has had on education, states and international organisations should work together to ensure that solutions to such violence are discussed and that to ensure education is not impacted.

A main priority for both governments should be ensuring safe access to education, alongside the de-escalation of the conflict and the banning of mortar usage. Both India and Pakistan should commit to ensure such areas remain safe, and should endorse the Safe Schools Declaration that aims to see schools and children protected during times of conflict.

As part of these efforts, India and Pakistan should stop using untargeted explosive weapons and those with wide-area impacts in areas where civilians are likely to be amongst the casualties, such as near schools. This would significantly decrease the impact of such violence on schools and schooling, allowing children to return to their studies, knowing that the schools are a place of safety.