When explosive violence was used in populated areas, 91% of all casualties were civilians, compared to 20% in other areas.

At least one death or injury from explosive violence was recorded in 23 countries and territories last month. The five worst impacted countries were Syria, Yemen, Afghanistan, Pakistan and Iraq according to civilian casualties.

Whilst there was a notable reduction in civilian harm from explosive weapon use in Syria, for the eleventh month in a row, Syria was the worst impacted by explosive weapons. Most civilian casualties (75%) were caused by airstrikes. The vast majority of casualties occurred in Rif Dimashq, Deir Ezzor and Idlib governorates.

Similarly, Yemen saw all of reported civilian casualties caused by airstrikes. as Saudi-led coalition airstrikes continued to see large numbers of civilian casualties. One of the largest attacks last month, saw at least 54 killed and injured more than 32, when a Saudi-led coalition air strike hit a crowded market in Taiz. Of those killed eight were children.

In contrast, both Afghanistan (98%) and Pakistan (59%) saw the majority of civilian casualties caused by IEDs, with each seeing large attacks on populated areas. In Afghanistan, Islamic State carried out a suicide attack in the Afghan capital, Kabul, at the Tebyan Cultural Center, where young men and women were meeting for a social gathering – at least 50 were killed and over 80 were injured.

Likewise, the civilian casualties in Iraq were mostly caused (91%) by IEDs. However, there was a substantial reduction in civilian harm from explosive violence in Iraq last month. This is in line with a continued decrease in IED harm throughout the year as security forces retake nearly all territory once held by Islamic State. 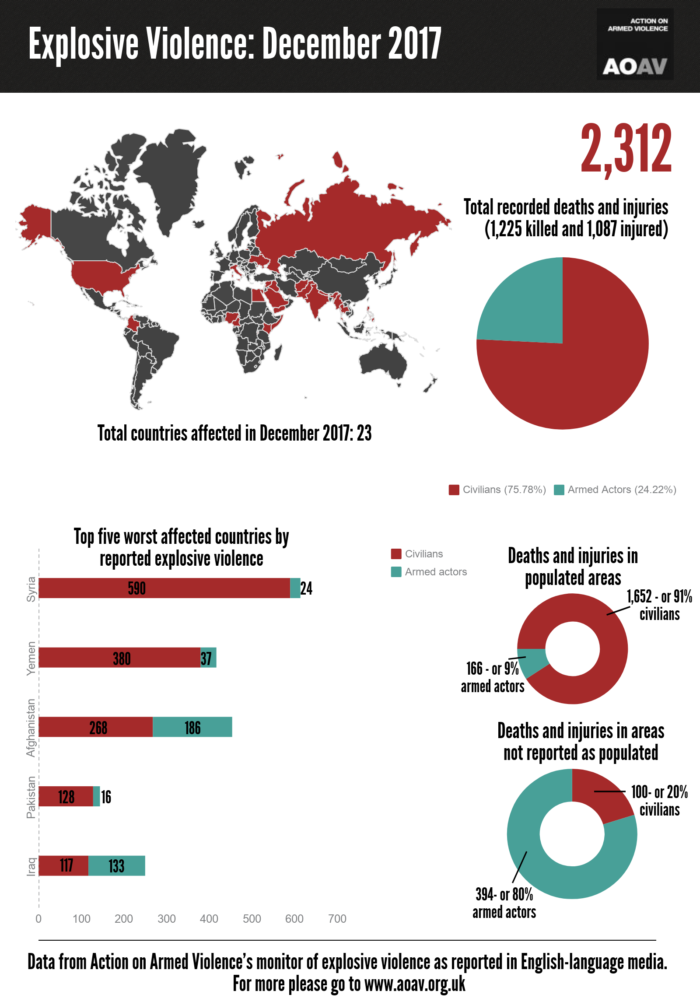