In February 2018, Action on Armed Violence (AOAV) recorded 4,228 deaths and injuries from 358 incidents of explosive violence around the world, as reported in English-language media. Civilians accounted for 82% (3,466) of the deaths and injuries recorded.

When explosive violence was used in populated areas, 97% of all casualties were civilians, compared to 22% in other areas.

At least one death or injury from explosive violence was recorded in 29 countries and territories last month. The five worst impacted countries were Syria, Yemen, Libya, Iraq, and Somalia according to civilian casualties.

Syria was by far the worst impacted by explosive weapons after a huge increase in violence in February. In fact, the number of civilian casualties recorded in Syria last month, was more than twice the monthly average recorded in 2017. The civilian harm recorded in February was also 133% higher than that recorded the previous month. Most civilian casualties (54%) were caused by incidents using multiple types of explosive weapons, shelling and air strikes, predominantly in Eastern Ghouta.

Iraq saw 98% of civilian casualties from explosive violence occur due to IEDs. There was a reduction in IED harm last month compared to the previous, continuing a downward trend in IED violence in Iraq over 2017.

In Libya, all civilian casualties were caused by one incident, a twin bombing targets a mosque in Benghazi, which left over 130 dead and wounded.

Similarly, in Somalia, the majority of civilian casualties were caused by a twin suicide car bombing in Mogadishu, killing 45 and injuring 36. 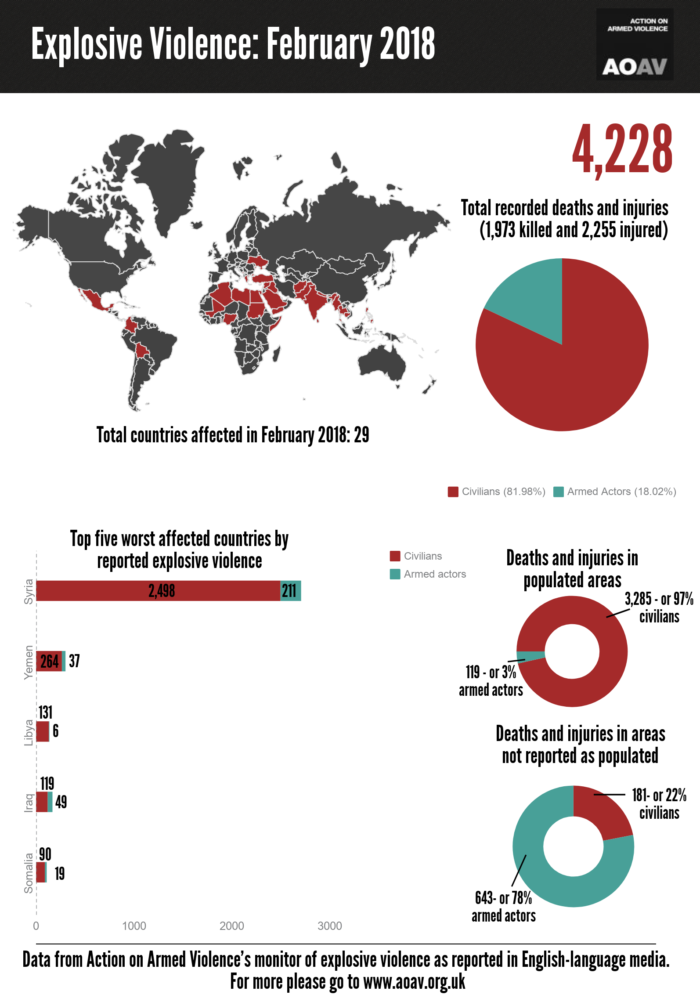