In August 2018, Action on Armed Violence (AOAV) recorded 2,070 deaths and injuries from 264 incidents of explosive violence around the world, as reported in English-language media. Civilians accounted for 61% (1,269) of the deaths and injuries recorded.

When explosive violence was used in populated areas, 90% of all casualties were civilians, compared to 20% in other areas.

At least one death or injury from explosive violence was recorded in 31 countries and territories last month. The five worst impacted countries were Yemen, Afghanistan, Syria, Iraq and the Philippines according to civilian casualties.

The decrease in casualties in August likely reflects the fall in recorded civilian harm in Syria, where despite consecutive months of Syria remaining the worst impacted country according to casualties from explosive violence, the number of casualties continued to fall, leaving it below both Yemen and Afghanistan last month. Just 147 civilian casualties  from explosive weapons were reported in Syria according to English-language news sources, last month. However, this could also reflect a news fatigue in the coverage of violence in Syria.

In Afghanistan, 92% of reported civilian casualties were caused by IEDs – in total 78% were caused by suicide attacks alone. On August 3rd, an ISIS suicide attack on a Shia mosque in Gardez city, in Afghanistan’s Paktia province, left at least 48 dead and over 70 injured. And, on August 15th, a suicide bomber targeted a tuition centre as teaching was under way in Kabul, leaving over 100 dead and injured – mostly students. Such attacks reflect the continuing rise in violence in Afghanistan that AOAV reported in July.

In Iraq, despite being amongst the five worst impacted countries, civilian casualties from explosive violence continued to decrease last month.

The Philippines saw 39 of their 41 civilian casualties from explosive violence caused by one incident in Isulan, in Sultan Kudarat, where 2 were killed and 36 injured when a suspected ISIS-inspired individual detonated a homemade bomb in a night market. 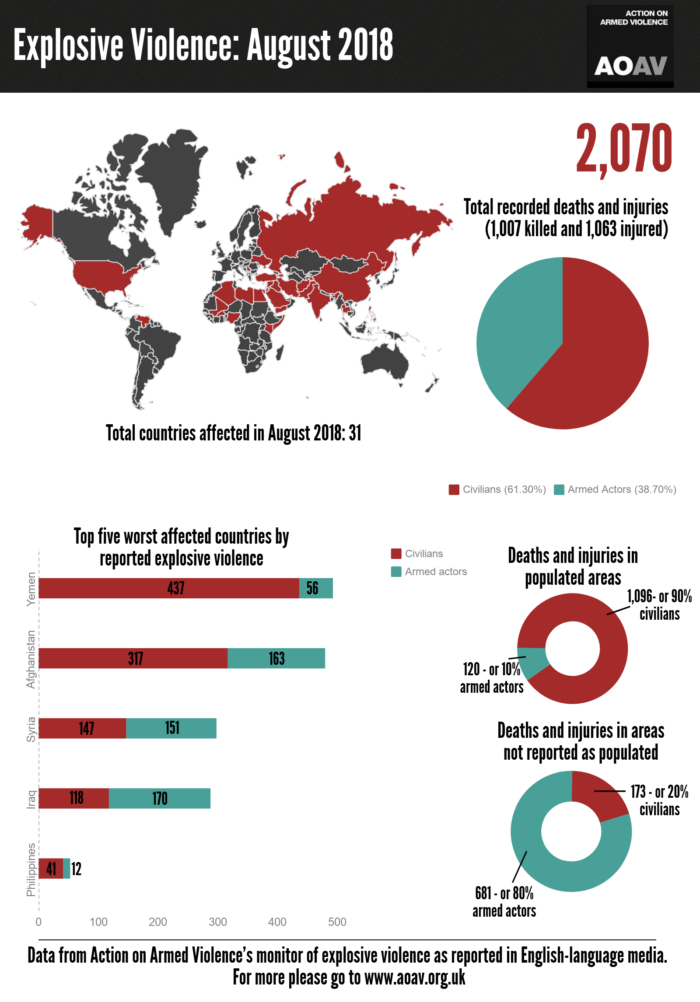