In December 2018, Action on Armed Violence (AOAV) recorded 1,475 deaths and injuries from 183 incidents of explosive violence around the world, as reported in English-language media. Civilians accounted for 53% (783) of the deaths and injuries recorded.

When explosive violence was used in populated areas, 85% of all casualties were civilians, compared to 14% in other areas.

At least one death or injury from explosive violence was recorded in 27 countries and territories last month. The five worst impacted countries were Syria, Afghanistan, Somalia, Iran and Colombia, in terms of civilian casualties.

In Syria, US-led coalition airstrikes continued to be the leading cause of civilian harm from explosive weapons. Of the civilians killed and injured in Syria last month, 65% were caused by airstrikes from the US-led coalition on ISIS-held areas in Deir Ezzor.

Whilst in Somalia, all civilian casualties were caused by IEDs, with the majority caused in just one incident on December 22nd 2018, when two bombings near the presidential palace in Mogadishu left 30 dead and another 54 wounded.

Similarly, in Iran all the civilian casualties were caused by one IED incident, a suicide car bombing near a police headquarters in Chabahar. Whilst in Colombia, the civilian casualties were caused by two grenade attacks; one at a nightclub in Montelibano on December 16th and the other at a nightclub in El Bagre on December 23rd. 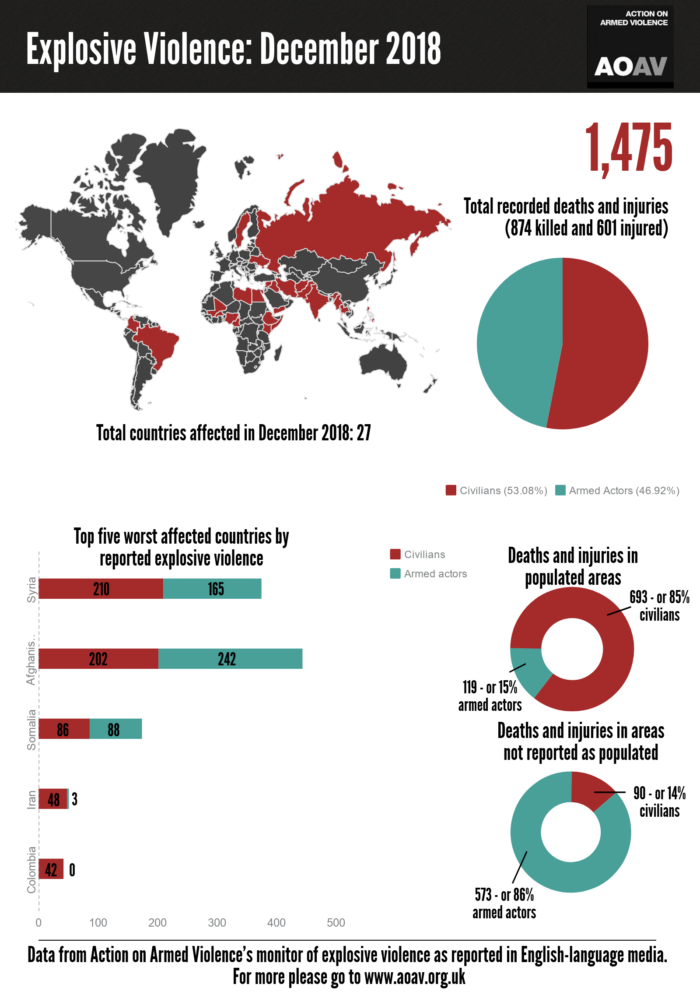