In July 2018, Action on Armed Violence (AOAV) recorded 3,151 deaths and injuries from 279 incidents of explosive violence around the world, as reported in English-language media. Civilians accounted for 75% (2,362) of the deaths and injuries recorded.

When explosive violence was used in populated areas, 86% of all casualties were civilians, compared to 31% in other areas.

At least one death or injury from explosive violence was recorded in 27 countries and territories last month. The five worst impacted countries were Syria, Pakistan, Afghanistan, Yemen, and Iraq according to civilian casualties.

Whilst Syria continued to be the country worst impacted by explosive weapons, last month IEDs were responsible for the most civilian casualties – 42% were caused by IEDs, 39% by airstrikes and 11% from ground-launched explosive weapons. On July 25th, multiple suicide and gun attacks in Suweida left at least 135 killed and many more injured.

In Pakistan, IEDs continued to cause the vast majority of harm; they were responsible for 95% of civilian casualties from explosive violence in Pakistan in July. Throughout last month there were many high casualty attacks on rallies and voting centres due to the general election. On July 10th, at least 85 were killed and injured when a suicide bomber detonated his explosives during a rally in Peshawar. On July 13th a suicide bomber targeted an election campaign event in a town in Mastung district of Balochistan, leaving over 300 killed and injured. And, on the day of the election, July 25th, further attacks took place, including a suicide bombing outside a polling station in Quetta. 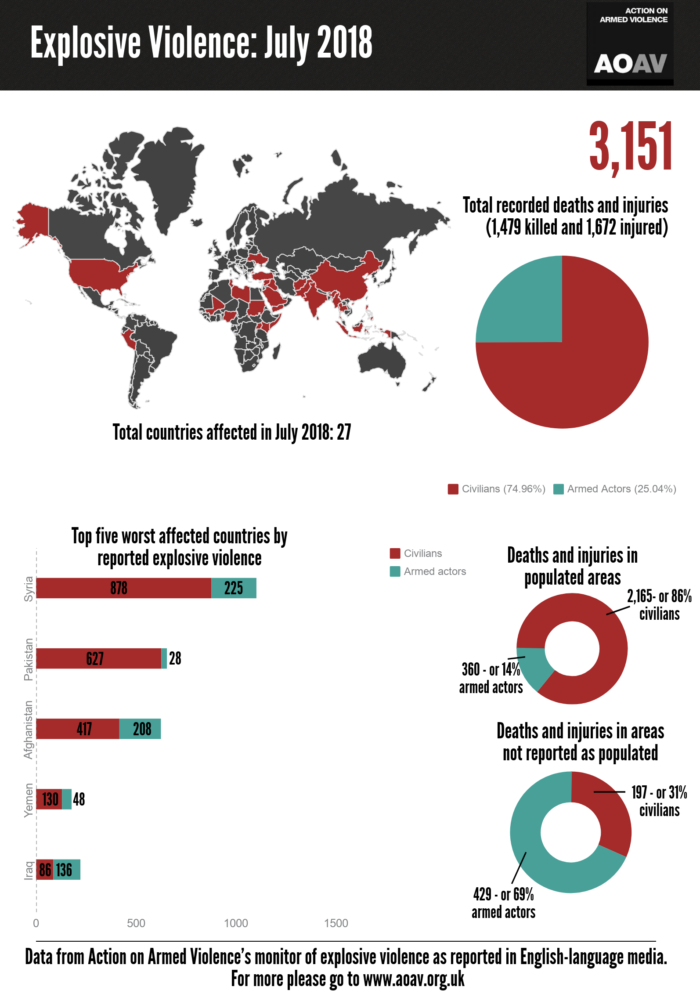