In June 2018, Action on Armed Violence (AOAV) recorded 2,461 deaths and injuries from 257 incidents of explosive violence around the world, as reported in English-language media. Civilians accounted for 67% (1,641) of the deaths and injuries recorded.

When explosive violence was used in populated areas, 89% of all casualties were civilians, compared to 15% in other areas.

At least one death or injury from explosive violence was recorded in 25 countries and territories last month. The five worst impacted countries were Syria, Afghanistan, Ethiopia, Yemen, and Nigeria according to civilian casualties.

Whilst Syria was the country worst impacted by explosive weapons, the reduction in casualties continued. 59% of civilian casualties from explosive violence across the country were caused by airstrikes, 16% by ground-launched explosive weapons and 18% from IEDs. On June 7th 2018, a reported Russian airstrike on Zardana, a rebel-held village in Syria’s Idlib province, caused at least 51 civilian deaths. Amongst the dead were at least 11 women and nine children.

In Afghanistan, 93% of reported civilian casualties were caused by IEDs, with the remainder from ground-launched explosive weapons (4%) and airstrikes (3%). On June 17th 2018, a suicide attack left 18 killed and 49 wounded when a bomb detonated near the regional governor’s office in Jalalabad city, Nangarhar, Afghanistan. The bombing in Jalalabad followed an Islamic State (ISIS) suicide attack in Nangarhar the previous day. The suicide attack on June 16th 2018, left 36 people killed and 65 wounded. The first bombing targeted civilians, security forces and Taliban members who had gathered to celebrate Eid al-Fitr.

In Yemen, 95% of civilian casualties from explosive violence were caused by Saudi-led coalition airstrikes and 5% by shelling.

In Nigeria, all civilian casualties from explosive violence were caused by suicide attacks. The attack on June 16th 2018, used both suicide bombers and rocket-propelled grenades when targeting the town of Damboa in Borno and left at least 31 were killed and 48 injured. 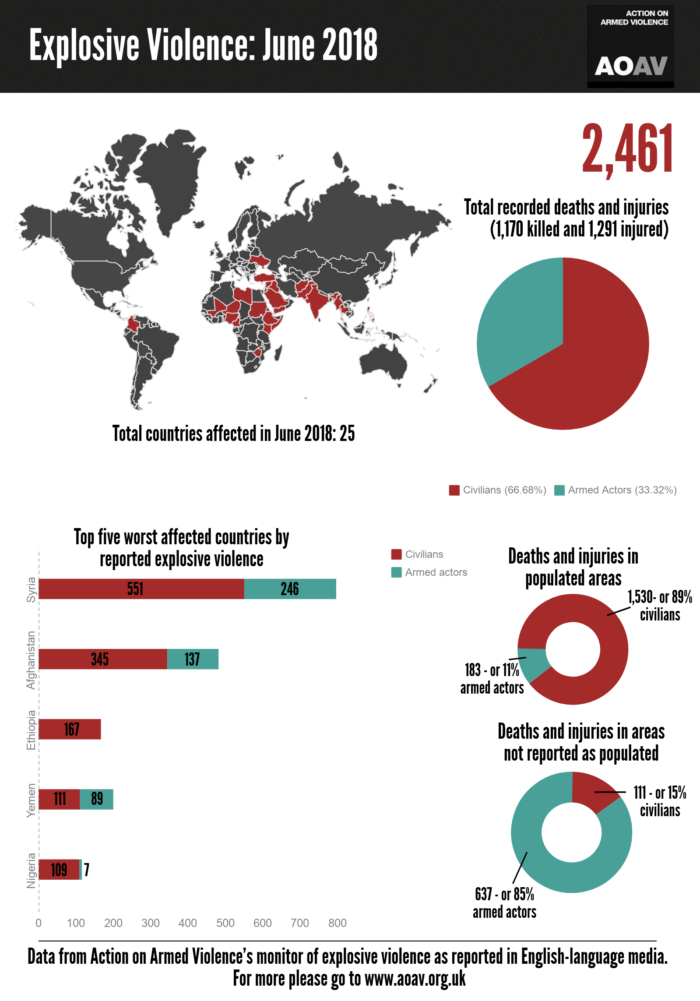