In November 2018, Action on Armed Violence (AOAV) recorded 2,516 deaths and injuries from 238 incidents of explosive violence around the world, as reported in English-language media. Civilians accounted for 60% (1,504) of the deaths and injuries recorded.

When explosive violence was used in populated areas, 89% of all casualties were civilians, compared to 11% in other areas.

At least one death or injury from explosive violence was recorded in 22 countries and territories last month. The five worst impacted countries were Syria, Afghanistan, Somalia, Pakistan and Iraq, in terms of civilian casualties.

After a considerable decrease in explosive violence in Syria in recent months, November saw a notable rise in civilian casualties. Of the civilians killed and injured in Syria last month, over 75% were caused by airstrikes from the US-led coalition on ISIS-held areas in Deir Ezzor.

In Afghanistan, on the other hand, the main cause of civilian casualties from explosive violence has been IEDs – responsible for 64% of civilian deaths and injuries. With both the Taliban and ISIS carrying out attacks across the country it is becoming increasingly difficult to attribute responsibility to a group.

In one incident, on November 20th, a suicide bomber detonated explosives amongst scholars and clerics who had gathered in a wedding hall in Afghanistan’s capital, Kabul, to celebrate the birthday of the Prophet Mohammed. The attack left over 130 dead and injured. Although the Taliban denied responsibility for the attack, no group claimed responsibility.

In all three of the remaining countries amongst the five worst impacted, they too saw the majority of civilian harm from explosive weapons caused by IEDs. In Somalia, all civilian casualties were caused by IEDs, mostly from one incident. On November 9th, a series of car bombs, including suicide car bombings, in Somalia’s capital, Mogadishu, left 150 dead and injured.

In Pakistan, 92% of civilian casualties from explosive violence were caused by IEDs. Similarly, the majority of casualties occurred on November 23rd, when a suicide blast targeted a local market in Kalaya area of lower Orakzai district, leaving almost 90 dead and injured.

Whilst in Iraq, IEDs caused 73 of the 81 civilian casualties from explosive violence, though it is clear the level of harm in Iraq continues to decrease. 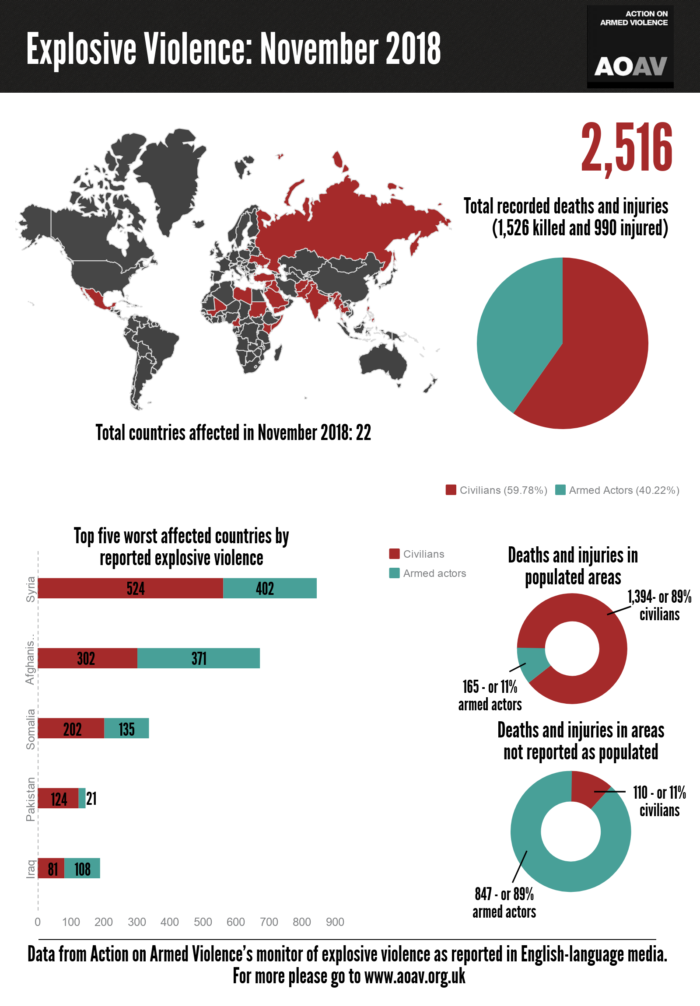