In October 2018, Action on Armed Violence (AOAV) recorded 2,108 deaths and injuries from 279 incidents of explosive violence around the world, as reported in English-language media. Civilians accounted for 57% (1,207) of the deaths and injuries recorded.

When explosive violence was used in populated areas, 84% of all casualties were civilians, compared to 30% in other areas.

At least one death or injury from explosive violence was recorded in 19 countries and territories last month. The five worst impacted countries were Afghanistan, Syria, Iraq, Yemen, and Somalia according to civilian casualties.

For the second consecutive month, Afghanistan was the country worst impacted by explosive weapons. 68% of reported civilian casualties were caused by IEDs. Much of the violence in Afghanistan surrounded the campaigns and elections for the lower house of parliament that took place October 20th. On October 2nd 2018, a suicide attack on an election rally in Afghanistan’s Nangarhar province left at least 14 killed and wounded 42. On October 13th 2018, a bomb was detonated targeting an election rally in north-eastern Afghanistan. At least 22 were killed and 32 were wounded in the attack. Further violence took place on the day of the election across the country.

Yemen too remained amongst the worst impacted countries with 86% of civilian casualties caused by Saudi-led coalition airstrikes.

In Somalia, all recorded civilian casualties from explosive violence stemmed from two incidents. One of which, on October 13th 2018, saw suicide bombers target restaurants in Baidoa, southern Somalia, in an attack which left 20 dead and another 40 injured. 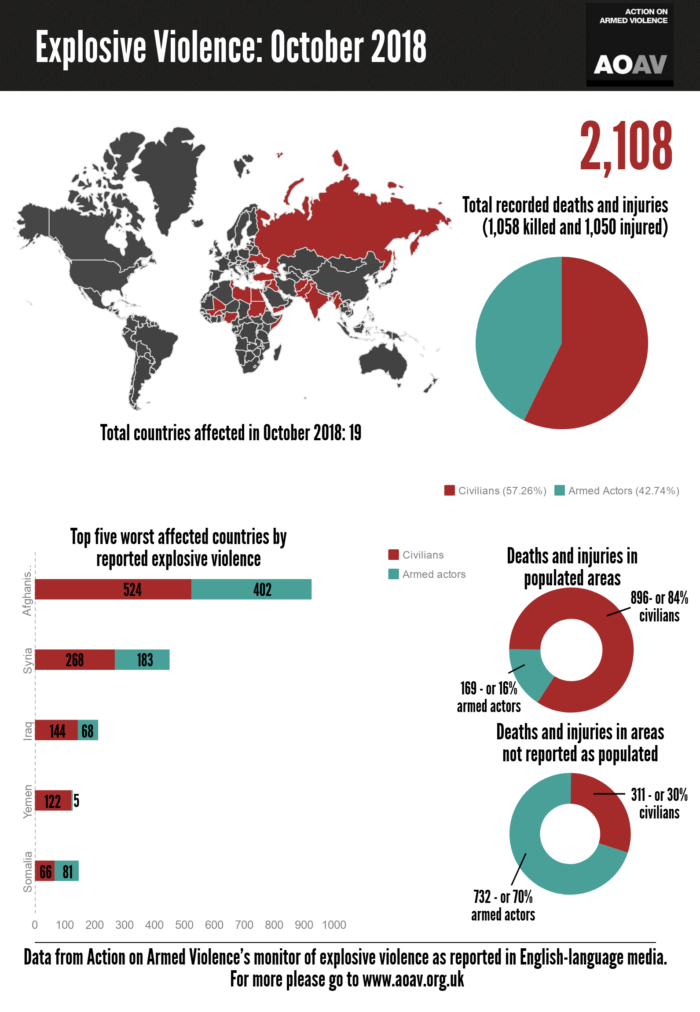