In the first month of 2018, Action on Armed Violence (AOAV) recorded 3,609 deaths and injuries from 400 incidents of explosive violence around the world, as reported in English-language media. Civilians accounted for 72% (2,585) of the deaths and injuries recorded.

When explosive violence was used in populated areas, 88% of all casualties were civilians, compared to 24% in other areas.

At least one death or injury from explosive violence was recorded in 23 countries and territories last month. The five worst impacted countries were Syria,  Afghanistan, Iraq, Yemen and Nigeria according to civilian casualties.

After a notable reduction in civilian harm from explosive weapon use in Syria in December, January saw a return to similar levels of explosive violence as had been seen throughout most of 2017. And in January, for the 12th month in a row, Syria was the worst impacted by explosive weapons. Most civilian casualties (53%) were caused by airstrikes.

Afghanistan saw 75% of civilian casualties from explosive violence caused by IEDs in January. The largest of which, saw an ambulance used to carry out a suicide attack on the capital, Kabul on January 27th. At least 103 were killed in the blast and 235 were injured. It has also had a lasting impact on the health services, with ambulance drivers facing suspicion when trying to carry out their job.

Iraq saw 92% of civilian casualties from explosive violence occur due to IEDs. After the substantial reduction in civilian harm from explosive violence in Iraq in December, unfortunately January saw civilian deaths and injuries from such violence more than double compared to the previous month, with a rise of 146%. On January 15th 2018, two suicide bombers struck a market in Baghdad’s Tayran Square, killing and injuring over 140 people.

Whilst Nigeria saw at least 8 IED incidences accounting for all 164 casualties, of which 85% were civilians. At least 6 were suicide attacks – which account for 138 of the 139 civilian casualties. 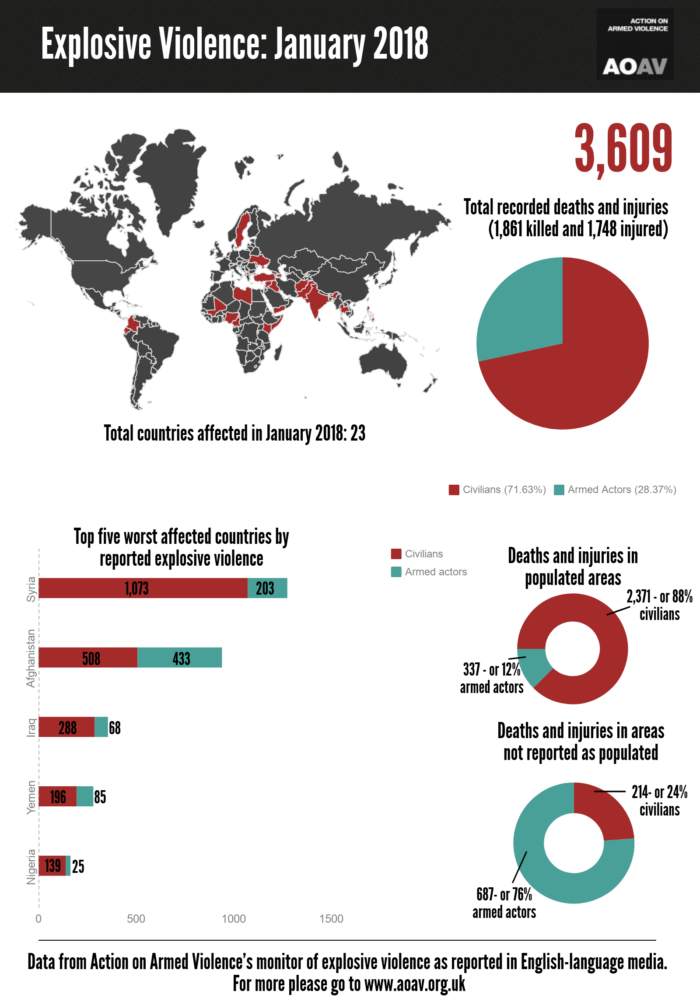