Despite there being an overall decrease in the global number of civilian casualties from explosive violence in the first six months of 2018, compared to the same period last year, there has been significant rise in civilian casualties in some of the hardest hit countries, new figures reveal. 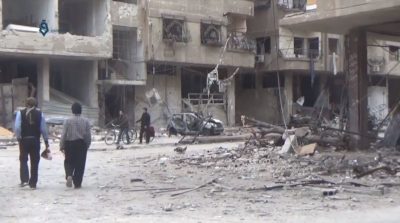 In the main, such increases, noted from monitoring global English language media reports, were the result of rising use of explosive weapons by states.

In Syria, the first six months of 2018 was marked by the substantial increase in violence in the Eastern Ghouta area by regime forces and allies – which saw even greater levels than those seen in Raqqa last year. Almost 2,000 civilian casualties from explosive violence were recorded in Eastern Ghouta in February alone and over 1,000 in March. The casualties from explosive violence in Idlib have also contributed to this rise.

Other countries witnessing substantial increases in civilian harm were largely down to non-state actors involved in terror attacks. In Afghanistan, 2018’s 27% increase is mostly accounted for by a rise in attacks using improvised explosive devices (IEDs), particularly by ISIS affiliated groups in the country. The number of casualties from attacks claimed by ISIS in Afghanistan rose by 345% in the first half of 2018, compared to the same period last year (with 136 civilian casualties in 2017 and 605 in 2018). Most occurred in Afghanistan’s capital, Kabul.

Other countries that have been largely free from explosive violence in recent years have also seen a spike in attacks. Ethiopia and Zimbabwe are of particular note, where last month grenade attacks at political rallies left large numbers of casualties.

While the overall trend of civilian harm from explosive violence is positive – there was a decrease of 21% in civilians killed or injured from explosive violence, with 14,065 in the first half of 2018, compared to 17,745 during the same period in 2017 – the increases in certain countries is of continuing concern.

As Iain Overton, Executive Director of AOAV says, ‘ISIS’s defeat in many parts of the world and a drop-off of air strikes by some nations, may have led to a reduction in civilian harm in some areas, but both state and non-state actors use of explosive violence continues to pose a threat to many around the world.  Urgent action should be undertaken to ensure that these flash points of violence do not escalate further.’