Explosive weapons evidently play a vital role in harming communities and their identity. Bombs can destroy sites of culture importance and embed themselves in the memory and identity of the communities that live alongside them. The words ‘The Blitz’ or ‘Dresden bombing’ still resonate decades after the harm wrought by such airstrikes during World War II. However, in other respects the impacts to culture are difficult to link directly to explosive violence alone but often stem from other links such as poverty and displacement – which also find their roots in the explosive violence

The end of the Sri Lankan civil war, a conflict that lasted from July 1983 through to May 2009, may have ushered in an era of peace, but for many people in the most impacted areas of the island, particularly in the north and east, it was a hard peace.  Tens of thousands of people impacted by this war, one marked by its repeated use of explosive weaponry, saw significant levels of damage to towns and communities.

In this section AOAV will examine the cultural impacts of explosive weaponry in Sri Lanka in all its aspects.

The destruction of cultural and historical sites has long-term consequences both for the collective memory, as well as for tourism. 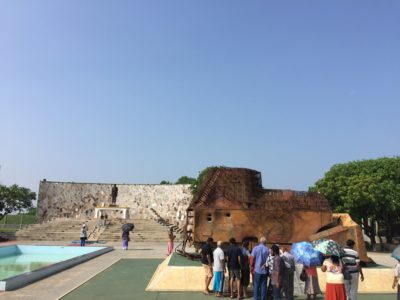 The impact of the war in Sri Lanka is very evident in the North and East, with destroyed houses still lining roads in many locations. Whilst temples and churches were impacted by the bombing – leaving holes within the communities in which they sat, much of this has been rebuilt in the main towns and cities. However, rural areas – particularly those still heavily contaminated – see such structures still in ruins. However, what has left a deeper impact is the building of Sinhalese and government monuments in the region celebrating such a victory – especially as these have been built before many forms of essential infrastructure.

Many of the most impacted stretches in the north, such as the A9, still heavily contaminated and marked by destruction, remain all but deserted – save from the Sinhala war tourists from other regions of the island who come to take in the sites. AOAV were told that these sites are seen by Tamils as ‘symbols of occupation’, preventing local Tamils from healing.

The end of the war also saw many LTTE monuments pulled down and government monuments erected glorifying their victory. 30 statues of a seated Buddha were constructed along the A9, ‘The Highway of Death’, the main arterial road, in the first three years following the war. There is deep anger around these monuments; AOAV researchers were told they were built before the destruction to civilian infrastructure was completed, leaving many without homes whilst efforts focused on monuments to those who had caused much of the destruction. 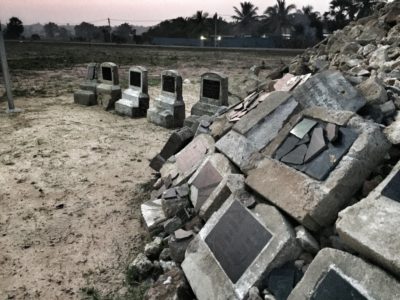 Remains of the Tamil Tiger cemetery in Kilinochchi, Sri Lanka.

Other slights also occurred: a main Tamil Tiger cemetery in Kilinochchi was bulldozered, the headstones left broken in a pile of rubble. As was the home of the LTTE leader, Prabhakaran – now a wasteland.

In Sri Lanka, the Tamils feel their defeat profoundly – they have no control over the post-war discourse and continue to live with the sense of humiliation, unmemorialised and unremembered in stone or concrete.

It is well-documented, if rarely discussed, that the use of explosive violence can fuel radicalisation and terrorism. While it is true that other forms of intervention and violence can fuel radicalism, the impact of explosive weapons and the destruction they cause in a very visible and explicit way, is likely to stimulate anger and calls for vengeance. AOAV found that explosive violence had this effect in Sri Lanka too during the war.

In Sri Lanka, there was significant verbal evidence to suggest the explosive nature of the violence and the lethal impact on civilians contributed to surges in LTTE recruitment. AOAV interviewed a former LTTE member in the Northern Province, who explained that the bombing on St Peter’s Church, where people had sought refuge from the bombs, led to a surge in recruitment, as well as for the Black Tigers – the LTTE’s suicide bombing squads. There was also, AOAV was told, a notion that a greater number of LTTE were willing to carry out suicide bombings because death through explosive violence had become almost normalised in the region.

“The worst incident I saw was the air force bombardment on St. Peter’s Church in 1994. 108 people were killed I think in total. We were in the adjacent area. When I arrived, the situation was chaotic – there was screaming, and bodies being carried out. We considered this a huge humiliation. The people had sought safety and went to the church for security. They were then targeted there.

This type of violence saw more people wanting to join the LTTE and also become Black Tigers and we saw many seek to join us after this attack.”


Today however, many of the older generation AOAV spoke to could not face further violence. Whilst they spoke of the poverty, discrimination and injustice that remained, they believed further violence could not be the answer – but neither could their current predicament continue. Amongst the youth the story was slightly different. Though they would prefer not to return to violence, they believed that at some point, if nothing changed, it may be the only option. There is also high youth unemployment which, some would argue, has driven some gangs to commit petty violence such as looting – and such impulses to violence have often been cited as red flag warnings for future radicalisation.[i]

However, it is useful to examine the impact that resulting nationalism had in in Sri Lanka and on those trying to deal with the impacts of explosive weapons. In Sri Lanka, the Sinhala-Buddhist nationalism was reinvigorated by the government’s victory and significant efforts were made to stamp this nationalism onto the Tamil-majority impacted areas. These efforts sought to wipe away much of Tamil and LTTE culture and replace it with Sinhala-Buddhism. Archaeologists and monks even scoured the North and East to establish the antiquity of Sinhala Buddhism in the region.[ii] In any case, this served to remind Tamils of their loss and the violence faced, as well as lengthen the recovery process. The Sinhalese nationalism is also linked to further discrimination against Tamils and Muslims in particular, with attacks on Muslim communities occurring as recently as March 2018.

Many of the areas most impacted by the use of explosive weapons became ‘securitised’, with military land now accounting for 3,000 acres in the northern district of Valikamam North, exacerbating the issue of displacement. The number of military personnel surged during the war, with current troop numbers 10 times what they were 30 years ago. In the North, AOAV was told that 150,000 army soldiers occupy at least 65,000 acres of land, and that the military presence was growing.[iii]  The huge military presence in the North also reflects the ‘bloated scale of a military that surged in manpower during the war’. 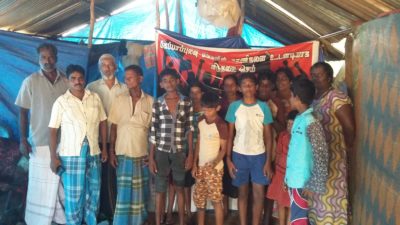 For those who lived off their land and used it for farming, the displacement and military occupation means that they are left without not only a home but also their livelihood. As the military now farms the occupied land, this has led to the strange and unjust predicament where those who used to own this land are paying the military for produce from land that used to belong to them and provide their income.

Land protesters in Keppapilavu, whose protest was at its 281st day when AOAV met with them in early December, told of how, before they were displaced, the crops on their land meant they were economically independent. Now they were unable to build their livelihood through farming many were turning to loans, which they say they have no way of repaying. This has reportedly fuelled a number of suicide attempts, as many find themselves in further debt. Others at the protest report going hungry, in order to give their children the little food they have. (See more details in the Environment section.)

It also has an impact on the safety of women and children. With rates of gender-based violence linked to increased military presence.[iv]

Explosive violence has a long impact on communities, as locals see their culture fractured, and their sense of belonging undermined – this has profound psychological consequences. Much of this damage can never be remedied and has the potential to leave lasting impact both within communities and to a nation’s sense of its own history.

This, alongside other infrastructural, economical and health impacts can fuel radicalisation, in both the form of violent nationalism, as well as recruitment to terror organisations. Both perpetuate cycles of violence.