The 33 days of war had far-reaching environmental impacts, particularly through the damage to buildings and power facilities. The bombings hit petrol filling stations and power stations, as well as left at least one million cluster bombs. In the oil spill that occurred due to the Israeli Air Force bombardment of a power station in Jiyeh, 15,000 metric tons of heavy fuel oil drained into the coasts and soil.

The oil spill impacted the coasts all the way to northern Syria and some parts of southern Turkey, polluting the surface and ocean floor and seriously harming aquatic life.[i] In total, at least 150 km of coastline was affected. The Environment Minister at the time, referred to the oil spill as ‘the most important environmental disaster in Lebanon’s history’. A United Nations Development Programme report estimated that the value of the damage to Lebanon from the oil spill alone amounted to $856.4 million in 2014. However, neither Lebanon nor Syria have seen compensation from Israel.

The UNDP, OPEC and states provided assistance to the value of over $14 million to assist with the oil spill, demonstrating the international nature of the problem and solution.

There is also the argument that the clean up process itself exacerbated other damage. For example, the clean-up process was reported to cause degradation to the shoreline as they took bags of sand, which were then left along the road before being deposited in landfills. The bags leaked at the roadside and then caused further pollution in landfills where it likely contaminated soil and ground-water – displacing the problem rather addressing it.[ii]

Despite the clean up, the oil spill is likely to have lasting effects on the marine ecosystem. A study on sea urchins along the coast found a huge depletion in this population. They found none in areas which before the war had seen huge populations.[iii] Though this may also be aggravated by other forms of pollution and consequences of climate change. The impact on the marine biodiversity from the oil spill was predicted to have an impact for between 10 to 50 years. 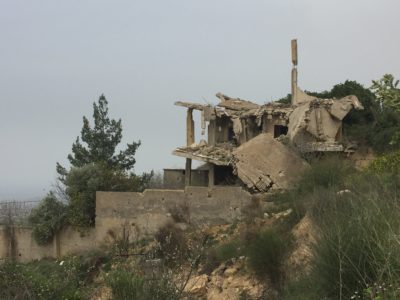 The destruction of over 100,000 homes as well as other buildings, left millions of tons of rubble in Lebanon, and in such a small country (with a total area of 10,5452 square km) that has already seen decades of violence and such destruction, this additional waste was hugely felt. As rubble was moved from civilian areas, dumps overflowed with waste materials. The debris from Beirut’s southern suburbs alone, where much of the violence was seen, had an estimated volume of 42 million cubic feet. The majority of this waste ended up at the coast, with pollution running into the sea. Whilst management of waste has been a chronic problem in Lebanon, many also saw this as a point as a door that opened the way for greater degradation as people continued to use such areas to dump waste. Even now, Lebanon is known for its ‘garbage mountains’ and poor waste management.

Recent efforts to manage the garbage has seen the government and developers turn to ‘land reclamation’ where trash is taken from dumps to be used as fill material for creating land – which by completion is expected to extend hundreds of meters into the sea. The expected surface area is projected to be 600,000 square meters in total. It is expected that this will exacerbate the plastic pollution problem in the Mediterranean.

Another main environmental impact was caused by the damage to the water supply and waste water network. In the immediate aftermath, the Lebanese Government reported that 45 main and 285 secondary water distribution networks, as well as 38 main and 120 secondary sewage disposal systems were destroyed or damaged during the war. The cost of the damage was estimated to stand at about $80 million. It remains the case that nearly one in three Lebanese buys alternative sources of drinking water, usually from mobile water trucks or in bottles, whilst those who cannot afford to rely on poor-quality water for their households. And waste water continues to cause substantial pollution in and around Lebanon.

The coasts off of Lebanon see dangerous levels of harmful bacteria, which make the shores unsafe for swimming. At the popular beach Ramlet al-Baida, E.coli and streptococcus levels both exceed 400 in 100ml sample – according to the World Health Organization (WHO) the acceptable limit for both in 1 per 100ml.

The Ministry of Agriculture estimated that 5% of the total recorded forest and wooded area prior to the war was affected by the bombardment, forest fires and other military activity, an estimated 1,800 hectares. The soil erosion, loss of flora and fauna, and degradation to ecosystems due to the forest fires was predicted to have a long-term impact, typically estimated to be between 10 and 50 years.

Whilst little research has been done on the impact to marine life due to the bombardment and consequential oil spills, it is highly likely to have long-term impacts, though these are also exacerbated and tied to other forms of pollution separate from the consequences of the bombardment. The bombardment however, did cause an estimated 305 tonnes of rainbow trout to decompose in the Assi River and a further 30 tonnes in Al Zarka river.

The oil spill impact was also reported to have killed algae and other organisms that fish and endangered turtles in the areas feed on. However, the clean-up efforts prevented much of the long-term harm that could have ensued.

Additionally, farmers and fishermen felt the impact through the loss of equipment. Whilst there are no clear figures for the total impact to equipment, there are some minimum figures 150 tractors and agriculture machinery were estimated to have been damaged in Saida, Tyre, Nabatiyeh, Bent Jbeil and Marjayoun and around 320 fishing boats, including wood and fiberglass boats, nets, traps and engines, were partially or totally damaged in Ouzaii fishing port. 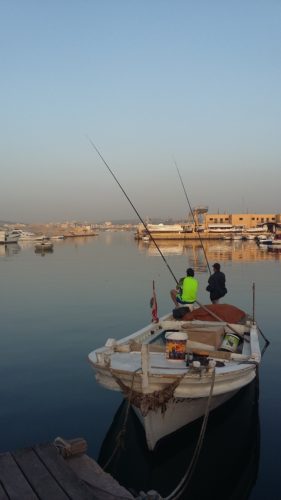 However, whilst it was clear that this would have a lasting impact on wildlife and particularly marine life, there was a positive seen in a small respect, with a short-term impact. The waters around the coast of Lebanon had for a long-time suffered from over-fishing and an unexpected consequence of the bombardment which prevented fishermen conducting their work was that fish populations increased significantly, which was a positive lesson.[vi] Unfortunately, due to the poor regulation that surrounds fishing, the waters were quickly back to being over-fished. This is also impacted by the war in Syria which has seen a large number of people, over one million, seek refuge in Lebanon. With jobs for Syrian refugees restricted, many turn to informal ways to provide for their families, including fishing.

The estimated one million undetonated cluster bombs and other exploded ordnance that had been dropped on Lebanon by Israel, has caused a variety of problems for civilians. Even today areas remain contaminated by such explosives from 2006. Whilst Lebanon also has contamination from landmines from previous conflicts, the majority of UXO left in 2006 was from air-dropped weapons, mostly cluster bombs. Between 2006 and 2016 the Lebanon Mine Action Center (LMAC) reported that there were 481 casualties (58 killed and 423 injured). Of these, 332 were adults and 149 were children. Of these, 93% were male and 7% were female. 38 were caused by mines, 46 by ERW, 333 by unexploded submunitions, and 64 by unknown devices. 30% of the 333 cluster munition casualties were children when the incident occurred.

Whilst the majority of the contamination caused was in the form of cluster munitions, the south also saw unexploded tank, artillery and mortar shells from both Israel and Hezbollah.

The cluster bombs and other UXO significantly harmed agriculture as farmers could not access land. Farmers are amongst the most vulnerable economically in Lebanon as many have little savings and so the interruption to work can be catastrophic. The impact on dairy farmers was particularly devastating as many were forced out of business and into debt. Not only did dairy farms see damage from bombings but, as many were forced to flee, this had a huge impact on production. Cows must be milked every day else production goes down and stress also hugely affects productivity.

After the war cows could not return to maximum productivity and, at most, AOAV were told, cows only ever returned to 50% of their production capacity.[viii] This caused substantial loss to the farmers on top of those already suffered. Farmers felt compelled to send many to slaughter, putting the farmer either out of business or in debt through the purchase of more cows.

It is also shepherds and farmers that see the most harm from UXO. Shepherds and their animals are said to be the most common victims of the left behind explosives in the south. Often they must either forsake their livelihood or continue despite the risk of harm. This ordnance has severely impacted agriculture, and particularly the income of vulnerable farmers. Many, despite the risk, continue to use areas known or suspected to be contaminated, out of desperation. Some initially attempted to remove bombs themselves.

In the first instance, it was estimated that 85% of the country’s 195,000 farmers lost all or some of their harvest due to the conflict – at a cost of between $135-185 million USD. Some farmers out of necessity, continued to attempt harvesting despite the bombardment – 33 laborers were killed in an Israeli airstrike in Al-Qaa in the northern Bekaa valley whilst harvesting peaches.

Up to 35% of the population was thought to be directly or indirectly dependent on farming, most on a small scale: “75 percent are working one hectare or less, with little or no capital reserves to absorb the losses”. After the war many of these farmers faced debt of bankruptcy.

Orchards and olive trees were also destroyed in the Israeli bombing and fires caused, which leaves a lasting impact. On one farm, 1,000 trees were destroyed. Further, many areas became off limits due to the severity of the contamination. This meant that the remaining land became over used for grazing and saw soil become more compact and lose vegetation. When the rains then came the water would run off the land and cause flooding.[ix]

To this day, there remain areas farmers are unable to access which they previously used for farming.

It is clear that the 33 days had a devastating impact on virtually every aspect of the environment and whilst many of these were addressed it came at a considerable price. In many ways it triggered a worsening of growing environmental issues such as with water, electricity and waste. Though many areas have now recovered from much of the environmental harm caused, some problems that were exacerbated by the conflict, particularly the rubble and waste, continue to have harmful consequences for environmental health, with far-reaching transboundary consequences.

Further due to conflict in neighbouring Syria, and the influx of refugees, Lebanon has yet again seen conflict increase the strain on the environment. Additionally, due to the politics surrounding refugees, it has also been suggested that many countries are unwilling to step in or criticise Lebanon’s response to its environmental and other problems, as they rely upon Lebanon accepting Syrian refugees and fear upsetting the government could see an increase of refugees at their own borders, thus prolonging and worsening the consequences for the environment.