The 2006 conflict between Hezbollah and Israel lasted 33 days over July and August and predominantly took place in the southern areas of Lebanon and south Beirut. Approximately 1,000 civilians were killed in Lebanon and 4,400 wounded, of which most were civilians. Almost 1 million Lebanese were displaced, and 125,000 homes were destroyed in the bombardment.

The 33 days of war in Lebanon in 2006 had far-reaching health impacts and, with conflicts today increasingly seeing damage to health infrastructure and providers, it is vital to examine such impacts. Below, AOAV investigates the long-term harm to health in Lebanon as a consequence of the explosive violence in the 33-day war.

In Lebanon the bombing campaign has had lasting impacts to health. Whilst over 1,000 civilians were reported killed, as many as 4,400 were left wounded – many with complex health conditions, such as burns. The injuries from 2006 were also said to be different from injuries witnessed in previous violence, due to the intensity and scale of the explosive violence.[i] Furthermore, in the last few days of the conflict, Israel launched about four million cluster bombs at Lebanon – leaving at least one million unexploded bomblets, mostly in the south. These continue to cause severe injuries. 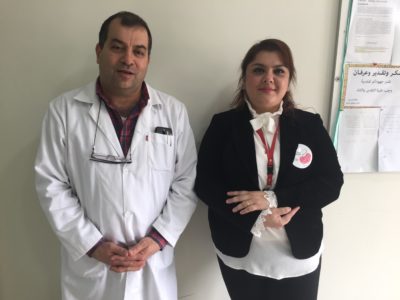 Ms Badran and Dr Marmar at Al Najda Chaabya Hospital, Lebanon. “The injuries in 2006 were a lot more complicated and difficult to attend to. I saw many more civilians injured than previously. The impact from the explosives were much bigger. I have seen people charred or burnt to death – 2006 was much more complicated. There were frequently burns and burns have a great long-term impact than the injuries other weapons might cause and will impact throughout the victim’s life. We still receive patients due to cluster bomb explosions, even though demining has been continuing since the end of the war. We often see shepherds hurt by the cluster bombs.” – Dr Ahmad Marmar

In Lebanon, of the 333 casualties from cluster munitions between 2006 and 2016, children were found to account for 30% of such casualties in Lebanon. Of these, 34% were under 12 and 66% were adolescents aged between 13 and 18. As the majority were from poor and rural communities, access to health care and other support was less readily available.[ii]

The bombing in 2006 also caused significant damage to the water supply and waste water network. In the immediate aftermath, the Lebanese Government reported that 45 main and 285 secondary water distribution networks, as well as 38 main and 120 secondary sewage disposal systems were destroyed or damaged during the war. The cost of the damage was estimated to stand at about $80 million. Wastewater was, and remains, a considerable environmental challenge in Lebanon. It remains the case that nearly one in three Lebanese buys alternative sources of drinking water, usually from mobile water trucks or in bottles, whilst those who cannot afford to rely on poor-quality water for their households. And waste water continues to cause substantial pollution in and around Lebanon.

The coasts off of Lebanon see dangerous levels of harmful bacteria, which make the shores unsafe for swimming. At the popular beach Ramlet al-Baida, levels of both E.coli and streptococcus, exceed 400 units in a 100ml sample – according to the World Health Organization (WHO) the acceptable limit for both in 1 per 100ml.

The bombing of power stations also contributed to Lebanon’s electricity crisis and saw reliance on generators increase, causing greater air pollution,[v] which are known to be carcinogens and teratogens, and contribute to disease and early death rates.[vi]

The degree to which such harm can be put at the door of explosive weapons is unclear but with so much destruction it is safe to say that the explosive violence has certainly done nothing to reduce these.

As a country that had routinely faced violence and war, many hospitals are designed to withstand the impacts of war. Despite this, it was reported that many hospitals saw damage from bombardment. Some saw only partial damage, whilst those associated with Iran or Hezbollah were thought to see greater destruction and bombardment. As people feared attending these due to the violence this put pressure on surrounding hospitals seeing less damage. This meant that hospitals in the worst impacted areas evacuated inpatients and provided only emergency treatment.

Whilst, one million Lebanese were displaced by the 2006 violence they quickly returned after the 33-days. However, in the south, an area particularly impacted by the Israeli violence, due to the history and proximity, hospitals have faced difficulties since the 2006 war recruiting medical professionals. Initially, they began having to look beyond university institutions to attract nurses.[vii]

Even now, almost 12 years since the end of the war, there is difficulty attaining and retaining the medical staff. AOAV were told that many will leave the region or country if they can as there is an uneasy tension and sense of instability in the south as there is a constant threat from across the border. Many AOAV spoke to felt that the region could easily return to the violence of 2006.

Whilst talking to civilians many were sceptical about the psychological impacts of the war. There was a sense of nationalism and victory attached to the end of the war as well as a stigma attached to mental illness and psychological treatment. However, doctors and other medical professionals described patients coming in with psychosomatic symptoms due to underlying psychological issues. Despite this, there remained very few psychiatrists available in the south. Many would be referred to specialists in Sidon or Beirut, which could mean up to two or three hours by car to get to an appointment.

Doctors explained that there was little demand for this type of assistance and whilst the war had seen a greater need for these services and a slight increase, AOAV were told that they were a country accustomed to war.[viii] Those that did seek psychological assistance in the years after the war were generally children who had developed phobias, as well as those suffering from stress, anxiety and other symptoms of PTSD.[ix]

Further, in a study of the long-term psychological impact of cluster bomb injuries on civilians in Lebanon, it was found that of the 244 victims interviewed in 2006, 43% were still suffering from PTSD ten years later when re-interviewed. Another 2016 study has shown a prevalence of PTSD in 23.4% in the general population of southern Lebanon.

However, due to the prevalence of war and violence in Lebanon, it has been suggested that communities and individuals have developed better abilities to cope with traumatic events, which can somewhat assist in protecting against negative mental and physical health outcomes. Additionally, the sense of victory and unity that was routinely reported in the south with the end of the 2006 war is likely to have contributed to support structures and resilience. The short duration of the conflict may also contribute to lower levels of such harm. Nevertheless, the portion of people suffering from depression and PTSD remains high.

Years after the cessation of hostilities, it appears that civilians still bear the burden – both physically and psychologically. On the other hand, infrastructure struggles to cope and engage with those in most need. Many lack access to services and efforts must be made to ensure such services reach those in need.

Today, as conflicts continue to see huge levels of civilians targeted, with medical staff fleeing and hospitals increasingly damaged, it is important to remember the long-term impact of such violence, particularly for mental health and the provision of services for those disabled by explosive weapons.