Whilst it is difficult in many respects to look at the societal harms and track this to explosive weaponry alone in conflicts, they evidently play a vital role in the harm to communities and their identity. Explosive violence devastates societies and tears up the social fabric in a specific, profound manner. Cultures, families and individuals are all impacted by this displacement, with the psychological toll of the loss and trauma of war impacting in profound and difficult to quantify ways.

In Lebanon, many people were displaced by the violence. Given the short duration of the conflict, many were able to quickly return, but for many others it still took years for their homes to be rebuilt and life to return to a semblance of normality. Post-conflict support came from many quarters, including from Hezbollah, Iran and Qatar.[i] Hezbollah also provided money for renting alternative accommodation whilst homes were rebuilt, easing the burden on civilians. 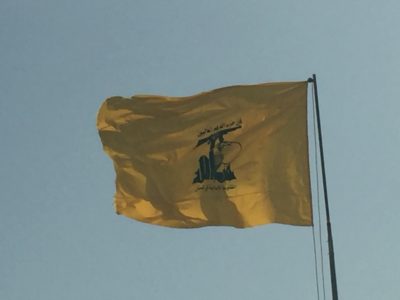 Hezbollah flags are a regular sight across the south of Lebanon.

The political consequences of this aid cannot be ignored – today many people feel that Hezbollah and its sponsors are their protectors, an awkward truth for those who see that group, proscribed as they are in the U.S. and elsewhere as a terrorist organisation – a politically destabilising force in the region. Many people with whom AOAV spoke to said that the war emboldened and deepened support for Hezbollah throughout the country – support that might lead to a further destabilisation of the region in future years.

Given the explosive violence targeted mostly southern areas and its short duration, few sought refuge abroad. Further, those who did only did so temporarily; most were said to have returned quickly to their homes, despite the destruction that awaited them. Locals described to AOAV an eagerness to return, bolstered by a desire not to be ‘defeated’ by Israel: “At the end of the war, you could smell the death in the air. Houses were flattened but because of the love we have for our land, the thousands who had fled returned. They came back straight away to rebuild and reclaim their life”.[ii] This was in stark contrast to other conflicts, in part owing to the fact it was an international conflict with a clearly defined enemy, a relatively short bombing campaign, and one where national pride and identity could offer a bulwark against community despair.

Given the rural nature of these areas and the poverty of many of these families, where stigma is often still attached to such health conditions, many families are also unsure how to care for a traumatised or disabled child.[iv] Due to the additional pressure this can place on families, the impacted children often express feelings of guilt, which adds to their conflict-related suffering. Of Lebanese children injured by cluster munitions, 88% were diagnosed with PTSD.[v]

Between 40 and 50 schools were destroyed and around 300 were damaged in the brief war – accounting for about 10% of all schools in the country. Substantial efforts were made by UNICEF and NGOs to provide essential learning materials to lessen disruption to education. However, few long-term studies have been conducted, and whilst it is likely that the psychological toll of the bombardments on children impacted education, it is difficult to distinguish educational impacts from the violence given the general conditions of the public education system in Lebanon.

This likelihood of abuse, the stress of post-war life, and poor access to community and psychological support, all appear to have contributed to higher rates of depression and PTSD in Lebanese women in the post-war period.

In Lebanon too, sectarian divides, between older generations in particular, were hardened post-war, with some resentment from various non-Shia communities for Hezbollah, who they blamed for initiating the violence.[vi] However, such divisions pre-dated the war and with changing social attitudes amongst younger generations it is difficult to attribute any hate crimes to the violence of the war in particular – though a reported rise in post-war drug taking might fuel or bring others to join drug trafficking gangs.

It is clear that the explosive weapons leave their own lasting legacy on societies. A community’s exposure to explosive weapons and their effects can change the dynamics of society, and this can impact women and children in particular. This can have deep consequences for future generations, and, if not addressed, can perpetuate a culture of violence and the rhetoric of revenge, as well as leaving women and children susceptible to greater exploitation and abuse.

The duration of such violence also has a stark impact – particularly due to the infrastructural and psychological harm.

[i] According to interviews with civilians, academics and other experts in Lebanon.

[vi] Based on interviews carried out across Lebanon and particularly in impacted areas.