Explosive weapons evidently play a vital role in harming communities and their structures. Bombs destroy homes and other essential infrastructure such as hospitals, places of worship and schools. Many across the globe are displaced by explosive weapons and some, depending on the length of the conflict, will choose to stay in their new countries. Those that remain are likely to suffer in displacement camps and poverty.

The end of the Sri Lankan civil war, a conflict that lasted from July 1983 through to May 2009, may have ushered in an era of peace, but for many people in the most impacted areas of the island, particularly in the north and east, it was a hard peace.  Tens of thousands of people impacted by this war, one marked by its repeated use of explosive weaponry, saw significant levels of damage to towns and communities.

In this section of AOAV’s report – analysing the reverberating effects of explosive violence long after the bombs have stop falling – we will examine the social impacts of explosive weaponry in Sri Lanka in all its aspects.

In Sri Lanka, 300,000 people were internally displaced by the end of the conflict. Even today, a sizeable minority of people remain in camps, unable to return to their homes.[i] As of May 2015, 73,600 remained displaced in the country’s Northern and Eastern districts, living in welfare camps or with relatives. Those who remain displaced do so owing to the continued reverberations of explosive violence – including UXO, the destruction of homes and infrastructure, and the continued military occupation, all factors that prevent a safe homecoming.

With 350,000 homes damaged or destroyed, many native Tamils were unable to return until such areas were rebuilt. Even now, redevelopment and demining continue. The additional poverty means that, even when land is cleared and declared safe, families cannot afford to rebuild. Many civilians AOAV researchers spoke to across the North said they had received little to no assistance – though they said previously some assistance had been provided by NGOs in the area. Others who had managed to access some assistance explained that the process to do so through the government was complicated and difficult to access – they believed this was likely why many failed to receive assistance. 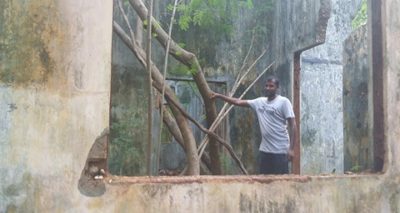 Returnees to Vasavilan East, north Sri Lanka, returned to destroyed and overgrown homes after clearance and had since found two items of UXO.

When AOAV met Anton and Jeyakumar in Vasavilan East, in Jaffna, they explained how their land had recently been declared cleared. This meant they were able to return, after 20 years displaced, and begin rebuilding. When they returned to the area, what had been their village was thick with jungle – trees had grown through their homes and the buildings were completely destroyed. They have no savings and have received no support for rebuilding. Instead those that had returned, worked together to clear the land but all were struggling to fund and find materials for rebuilding.

They remain living in a camp or out in the open and their families are scattered across the North. Unfortunately, since they began working on their land, they have also found two shells – they called a demining organisation to get these cleared – they are very cautious about where they tread and how they work for fear of more explosives.

By the end of the conflict, 145,000 people had fled Sri Lanka. Many of these were the wealthiest and best educated, particularly in the impacted areas. The Sri Lankan diaspora today stands between 700,000 and 900,000.[ii]

So great has this exodus been that today some professions have been left without suitable candidates, a consequence of a significant post-conflict absence of educated formal workers. Even today, the professional elites may find Australasia, Europe or North American a better place to settle, and many do leave, joining family members within the diaspora. This, of course, has a substantial effect on the population most impacted by the bombardment in particular, especially in areas such as healthcare and education.

A psychiatrist in Jaffna explained that though many would train in the area – once qualified they would often join relatives abroad where they could more likely earn more, have a less stressful workload and a better quality of life. Such professions were struggling severely because of this.

Though it is also true that many in the impacted areas have come to rely on the diaspora for income and projects. Many families may rely on relatives living and working abroad. 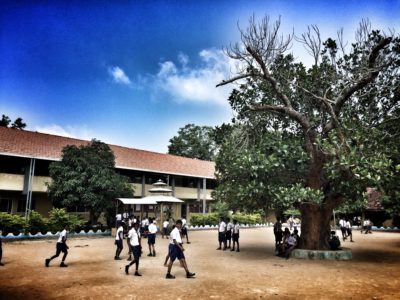 In Sri Lanka, teachers described to AOAV how the slow rebuilding of schools destroyed in the violence, had been in part hampered by the militarisation of the area, with army barracks taking over some schools. And while other schools have been rebuilt, children’s education is still affected in a variety of ways. Poor mental health arising because of the violence has been linked to a rise in behaviours that affect students’ ability to learn. Truancy, lack of focus in class, depression and drug-taking were all cited as concerns by teachers AOAV interviewed. The school principal at Kilinochchi Maha Vidyakyam, Jayanthy Thanabalasingham, described how ‘because of the impact [of the explosive violence] on other family members, such as mothers and fathers, children were influenced. Parents might turn to drugs and then students bring these to school. Two students were suspended last week for drug taking. One boy was also attacked and ended up in hospital because of this incident.” Two out of every five children in the war-torn North and East are today thought to have mental health disorders.[iii]

A loss of parental contact was also cited as an issue impacting the development and behaviour of children there.[iv] One teacher, for instance, cited the employment of women as demining operatives, amongst other occupations, as potentially harmful to a child’s development. She claimed that, in some cases, children were left alone for long periods of time and came to her school without breakfast as their mothers were at work.[v] Demining staff in the region countered this claim, saying that the work hours of the deminers they hire are formulated to allow parents to return home to be with their children and additionally many households had other relatives who could be relied upon to assist with childcare. Nevertheless, it is worth recognising that post-war employment amongst women may threaten ‘traditional’ values. Whilst the employment of women in post-war zones is a positive reality, local sensitivities must also be considered.

A 2007 report on psychological health in the north established that: ‘the chronic war situation caused… fundamental social transformations. At the family level, the dynamics of single parent families, lack of trust among members, and changes in significant relationships, and child rearing practices, were seen’.[vi] In short, the war has had a profound impact upon young people.

It is estimated that 92% of children in northeast Sri Lanka experienced severely traumatising events during the war, and 25% presented with symptoms of PTSD.[vii]  A local paediatrician pointed to a loss of familial bonding as a consequence of explosive violence, as parents try to deal with their own trauma and turn inwards or to alcohol or drug abuse – frequently exacerbating mental health issues in children. Even now, many children present with mental health issues linked to impacts of explosive weapons.[viii] 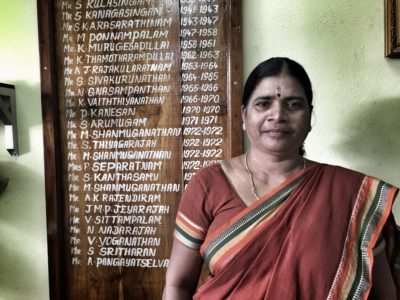 In Sri Lanka, there are approximately 40,000 ‘war widows’ in the Northern Province and 50,000 in the east – though this does not account for all female-headed households. Gender divisions in employment have left many struggling to provide for their families. Desperate, many turned to brewing alcohol illegally, sex work, or secure loans to make ends meet.

In female-headed households, depression was one of the most-cited mental health impacts. According to one study, 70% of the women had elevated scores of depression.[ix] Many people whom AOAV interviewed across the North, professionals and civilians alike, cited the high-rates of suicide among women; according to HALO representative in Kilinochchi this was reported to amount to about 30 women a month.[x] It is difficult to exclusively attribute this to the war – Sri Lanka has always had a high number of suicides – but it is likely the levels of explosive violence certainly exacerbate existing suicidal norms.[xi]

Widespread sexual violence was also documented in military-run IDP camps, though many women remain silent on the issue, largely because of cultural stigma – such violence is also reported to have happened to male prisoners also. Post-war too, gender-based violence is thought to have increased, linked to greater levels of poverty, women’s economic vulnerability and an increased military presence (in multiple cases soldiers marry war widows and then abuse them in their new marriages – often to women they consider ‘beneath’ them, as they are not Sinhalese).

Beyond gender-based violence, explosive violence also acutely aggravated ethnic and religious tensions in Sri Lanka, inspiring violence even today. The end of the war accompanied a rise in Sinhala-Buddhist nationalism – and even now those seen as a threat to this often see punishment in the form of local violence. In March 2018, Sinhalese anti-Muslim violence left three dead, 20 injured, 11 mosques destroyed, and more than 200 Muslim-owned homes and businesses destroyed in four days of violence in Kandy district.

Human trafficking has also flourished, a criminal reality fuelled by poverty, the existence large numbers of often vulnerable war widows and orphans and a poorly functioning police force (one that, owing to its connection to the State, also is viewed with distrust by many Tamils). In the North, there has also been a reported rise in armed gangs, drug dealers and disaffected youth. Journalists explained these were linked to high levels of poverty and unemployment levels in the areas most impacted by explosive violence.[xii]

It is clear that the explosive weapons leave their own lasting legacy on societies. A community’s exposure to explosive weapons and their effects can change the dynamics of society, and this can impact women and children in particular. This can have deep consequences for future generations, and, if not addressed, can perpetuate a culture of violence and the rhetoric of revenge, as well as leaving women and children susceptible to greater exploitation and abuse.

[i] Interview with displaced persons and HALO represenatives.

[iv] Interviews at a school in Kilinochchi.

[v] Headteacher at a school in Kilinochchi.

[viii] According to interviews with doctors and teachers in the impacted areas.

[x] Interview with HALO representatives in Kilinochchi. It should be mentioned, however, that suicide has a long tradition in Sri Lanka – with Sri Lanka being the world’s worst impacted countries for suicides at one point.  It is hard to be absolute as to the root causes of such self-harm, therefore.

[xii] Journalist interviewed in Jaffna where the majority of the gangs operate.