Eritrea: Country overview
The State of Eritrea is located on the Horn of Africa, bordering Sudan, Ethiopia and Djibouti, with Asmara as its capital. Eritrea has a population of around 6 million and is estimated to be one of Africa’s poorest countries. Since Eritrea gained independence in 1993, President Isaias Afweki has governed the country with his party as the sole political presence. The UN has accused the Eritrean government of crimes against humanity and, since 2009, has imposed an arms embargo on Eritrea for its alleged support of al-Shabab in Somalia.

Eritrea has, to date, neither signed nor ratified the Arms Trade Treaty. 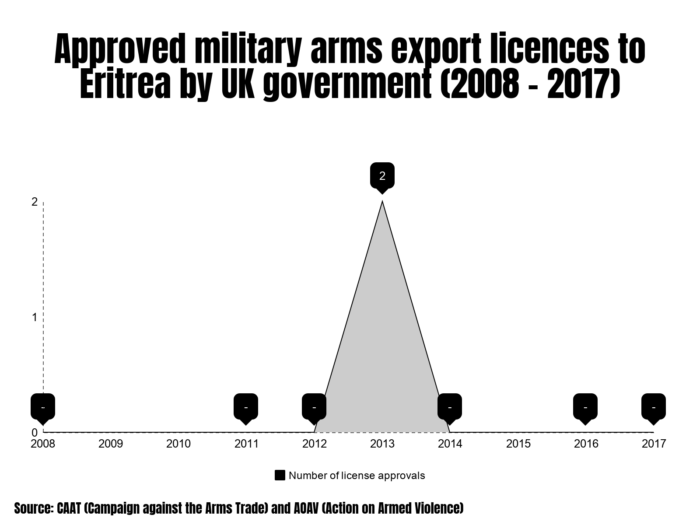 What is the total value of those exports in GBP?
The value of the exports to Eritrea has been negligible, with just £8,640 worth of military arms exports approved for Eritrea in the last decade – this occurred in 2013. 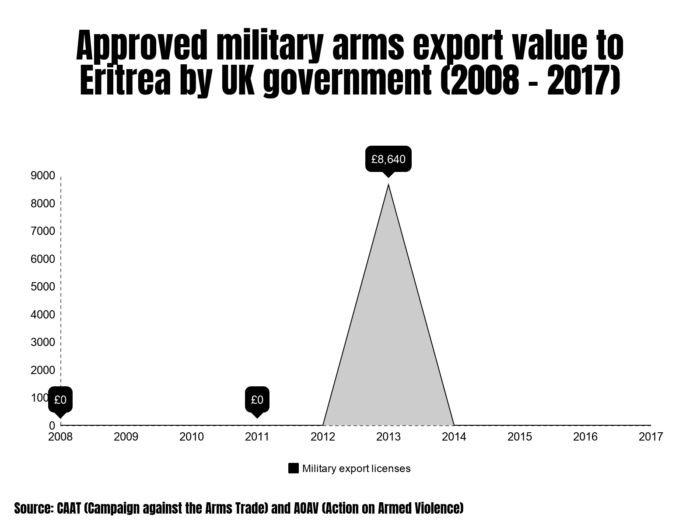 What are the top 10 types of arms export licences Britain is selling to Eritrea?
Whilst the data given above is just for military exports (single-use), when you consider both military and dual-use exports (dual-licences are permits to control all the material, software and technology that can be used for civil purposes like humanitarian aid, but also for military goals) the top ten export items requiring licences are as below.
The most frequent piece of equipment bought has been towed hydrophone arrays, a naval radar system. This is not surprising as Eritrea has a long coastline along the Red Sea which is home to a number of threats, from pirates to terrorists.

Why should British citizens be concerned about arms sales?
Eritrea is a repressive one-party state, which does not hold elections, and lacks opposition parties, a legislature, or civil society organisations. Arbitrary detention, torture, and forced disappearances are widespread and systematic, and often target journalists, members of certain religious groups, and those who criticise government policy or seek to evade military conscription. There have been no independent media outlets since a crackdown in 2001, and foreign reporters are not allowed into the country. The government carries out arbitrary and pervasive surveillance of its citizens. National service is mandatory and indefinite, and many conscripts are victims of forced labour and abusive conditions.

The UN Human Rights Council has identified the security and defence institutions as among the main perpetrators of systematic, widespread and gross human rights violations committed in the country. It named the Defence Forces, and in particular, the Army as being of concern. The National Security Office, the Police Forces and the Ministry of Defence were also noted.

Arms sale to Eritrea is, therefore, a matter of concern, as it risks sustaining the current violent and suppressive environment.

What has the British government said about these concerns?
Despite selling arms to the country, the UK government has spoken out forcefully about the Eritrean regime’s human rights abuses, and the country is also listed on the UK’s list over countries of particular concern. In 2016, the FCO said: “The human rights situation in Eritrea continues to be of concern to the UK and there have been no tangible improvements to the situation in the second half of 2016. From July to December 2016 we continued to use our embassy in Asmara and our wider engagement to encourage the government of Eritrea to improve their human rights record. In particular, we wish to see amendments to the way the National Service is implemented so that there are clear, published limits to the term, as well as the implementation of the national constitution and increased cooperation with international human rights bodies.”

What evidence is there of human rights abuses that the Eritrean government have committed since 2010?

Events in 2010:
A range of human rights violations was reported in 2010. Freedom of expression was seriously restricted and criticism of the government was suppressed. Independent journalists, political opposition members, unregistered religious groups and civil society were all highly controlled by the state. Eritrea requires mandatory conscription and those deserting the armed forces were reportedly harassed, imprisoned and subjected to ill-treatment.

Events in 2011
There were many cases of arbitrary arrests, unfair trials and limitations of freedoms of expression reported in this period. A notable case was when four journalists working for the government-controlled radio Dimtsi Hafash were arrested: Nebiel Edris, Ahmed Usman, Mohamed Osman, and Eyob Kessete. No reason was given for their arrests and they have not been charged with a crime or brought before a court or provided with access to a lawyer or their families. They are still believed to be held incommunicado in an unknown location.

Events in 2012
Among a range of persisting human rights violations, the Committee to Protect Journalists (CPJ) identified Eritrea as the most censored country in the world in 2012, reporting how state media operate under the rigid control of Information Minister Ali Abdu, who uses intimidation and imprisonment to enforce a government-approved message. CPJ assessed Eritrea as Africa’s worst jailer of journalists and the fourth worst worldwide.

Events in 2013
Human rights organisations continued to report about arbitrary arrests, saying that thousands of people are held incommunicado in arbitrary detention without charge in Eritrea. Widespread practice of torture by the government was documented by Amnesty International, who found that “torture and other ill-treatment are commonplace, used for the purposes of punishment, for example of government critics, dissenters and draft evaders, for failure to perform duties during national service, insubordination, or as punishment for the escape of another prisoner; for interrogation, for example, people who attempted to flee the country are tortured to extract information on who assisted them; and for coercion – adherents of religions not recognised by the state have reported that they were tortured to force them to recant their religion.”

Finally, it was reported that the Eritrean government had been distributing machine guns and ammunition to the civilian population, for unknown reasons. The conflict with Ethiopia could arguably explain the distribution as it would enable the population to retaliate immediately on an Ethiopian attack.

Events in 2014
Eritrea’s human rights record remained poor. Widespread arbitrary and inhumane detentions and lack of respect for freedom of expression, assembly and movement were reported as matters of particular concern. For instance, Reporters Without Borders placed Eritrea at the bottom of its World Press Freedom Index for 2014. Also, Eritrea has not yet allowed the UN Special Rapporteur to visit in order to assess the human rights situation.

Events in 2015
The UN Human Rights Council stated in its annual report that “National service as implemented by the Eritrean authorities involves the systematic violation of an array of human rights on a scope and scale seldom witnessed elsewhere in the world … the indefinite duration of national service, its terrible conditions – including arbitrary detention, torture, sexual torture, forced labour, absence of leave and the ludicrous pay – and the implications it has for the possibility of any individual to found a family, conduct a family life and have favourable conditions of work make national service an institution where slavery-like practices are routine.” The main perpetrators of these violations, according to the UN, was the Eritrean Defence Forces, several ministries, including the Ministry of Justice and the Office of the President.

The Council also reported that freedom of assembly and association was under threat, as peaceful attempts to demonstrate had been suppressed by the government, whose security forces reportedly arrested, detained and sometimes executed demonstrators unlawfully. The government was likewise accused of engaging in a systematic violation of the right to privacy, enabled by its extensive spying and surveillance system targeting individuals. The Commission of Inquiry on Human Rights in Eritrea found that “It [the regime] employs all means, including harassment, intimidation and the abusive use of a coupon system originally created to allow access to subsidized goods in government shops, to collect information about Eritreans. Pervasive spying and surveillance in Eritrea go beyond the needs of national security or crime prevention and are arbitrary”.

Events in 2016
The UN Human Rights Council found in 2016 that the mandatory military service is not necessarily a human rights violation, but that it among others is the rape and torture committed in military camps, that makes the service inhumane. Crimes that most often happen unpunished. It was also reported by the UN Human Rights Council how military conscripts attempting to flee were being killed. The Council also found that “the use of torture by Eritrean officials has been, and remains, both widespread and systematic in civilian and military detention centres.

The 2016 Foreign & Commonwealth Office Report likewise found that grave human rights violations persisted to take place throughout 2016, with little improvement. The UN Commission of Inquiry on Human Rights in Eritrea stated that there were “reasonable grounds to believe that crimes against humanity have been committed by the Government of Eritrea”. The Special Rapporteur on Human Rights in Eritrea continued to be denied access to the country. The UK State Department found that the lack of transparency completely hindered to determine the exact scope of deaths as a result of torture or poor detention conditions.

It should also be noted that in armed clashes erupted between the Eritrean and the Ethiopian military in June this year. The clashes reportedly killed hundreds of combatants. This is concerning as it indicates a risk that UK arms could “provoke or prolong armed conflicts or aggravate existing tensions in the destination country”, or “be used aggressively against another country”, which is banned by the UK arms export licensing criteria.

Despite this catalogue of harm, the UK still deems it acceptable to sell weapons and arms to the Government of Eritrea.  Human rights abuses continue. For more from this investigation please go here.