Haiti: Country overview
The Republic of Haiti is located in the Caribbean Sea, its capital is Port-au-Prince and it has an estimated population of 10 million. Haiti is a constitutional republic with a multiparty political system but has a history of political instability, including election boycotts, human rights abuses and popular demonstrations against the sitting government. Power is divided between the president, who since 2017 has been Jovenel Moïse, and the prime minister, who has been the Jean-Henry Céant since August 2018. Since 2004, the UN has deployed the ‘UN Stabilization Mission in Haiti’, also called MINUSTAH.

Haiti has signed the Arms Trade Treaty in 2014 but is still yet to ratify. 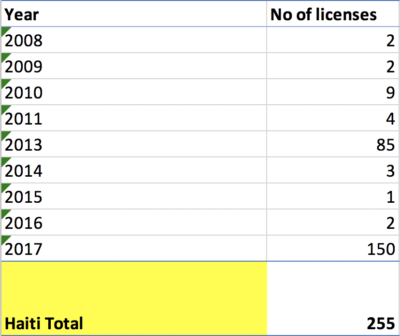 Although the total value does not represent much to the UK in comparison with other sales, the fact that arms and surveillance technology are allowed to be sold to this nation beset by so many human rights concerns raises issues in of itself.

What are the top 10 types of weaponry Britain is selling to Haiti?
The most frequent type of weaponry bought from the UK by Haiti have been component parts for all-wheel drive vehicles with ballistic protection. This is reflective of a country with very poor infrastructure, particularly roads, and the need for rough terrain vehicles capable of withstanding criminals and gangs.

Why should British citizens be concerned about arms sales?
Since 2007, the Inter-American Commission for Human Rights recommended to the Haitian government to develop a comprehensive strategy to address the causes of criminal violence that were expanding to urban areas, but the situation has not improved since then. On the contrary, organised criminal activity spread in the last decade to such an extent that neither the police nor the justice system has been able to contain the rising tide of violence.

The police forces themselves have been accused of corruption and dealing with armed gangs involved in illicit drug trafficking. In addition, allegations of illegal use of force persist, including the lethal use of such in some instances. Other concerns, such as the degrading treatment of detainees, including beatings and sexual abuse, have also been raised by several NGOs.

Secondly, the Inter American Commission to the United Nations has exposed severe dysfunction in the Haitian judicial system, especially since 2004, with particular criticism, levied at the slowness of proceedings in cases relating to political crime, and widespread corruption. Furthermore, the Haiting prison population has continuously increased in the last years, leading to an ‘alarming’ and ‘cruel’ situation as described by the UN Stabilization Mission in Haiti (MINUSTAH).

These are just some of the reasons why UK arms export to Haiti is concerning. In its fight against criminal gangs, the Haiti security services have routinely used excessive use of forces, especially against detainees. Moreover, since there are signs of corrupt links between the police and the criminal groups, it seems bordering on irresponsible to equip their security forces with weaponry, as such arms may end up in the wrong hands.

What has the British government said about these concerns?
The UK government has been largely positive about the political situation in Haiti. A 2017 statement by Stephen Hickey, political counsellor to the UK’s mission to the UN, was to say: ‘Today we are all witnessing Haiti turn a corner. Days of violence and instability have begun to fade. The ultimate thanks go to the people of Haiti. Without question, they have displayed remarkable resilience. But the courageous efforts of MINUSTAH have also played their part. We salute their successes and look forward to the UN’s continued assistance to the Haitian people.” Despite evidence to the contrary, the British government has not voiced any concerns about the human rights situation with the Haitian government.

What evidence is there of human rights abuses that the Haitian government have committed since 2010?

Events in 2010
Several human rights issues were reported this year. These included allegations of extrajudicial killings by Haitian National Police (HNP) officers, excessive use of force against prisoners, overcrowding in prisons, prolonged pretrial detention, serious corruption within the government, violence and societal discrimination against women, child abuse, human trafficking, and ineffective enforcement of worker rights. The number of kidnappings reportedly doubled from the previous year (from 66 to 121), and current and former HNP officers were accused of participation in such.

Events in 2011
The UN Human Rights Council reported their concerns relating to prolonged pre-trial detention and serious issues with prison overcrowding, concluding that the conditions in the prisons were among the worst in the Western Hemisphere. The Council reported that Haiti’s criminal justice system routinely violates basic human rights, and fails to comply with protections that exist under both Haitian and international law. Moreover, reportedly 80% of Haiti’s prisoners have yet to be convicted of a crime, and are – on average – held in illegal pretrial detention for more than a year. Finally, the Council found that the conditions prisoners face often amount to torture or cruel, inhuman and degrading treatment or punishment.

Events in 2012
The most serious barriers to human rights in Haiti were reportedly the lack of democratic rule, the insufficient respect for the rule of law which was worsened by an inadequate judicial system and permanent widespread corruption. For instance, several reports from international and domestic NGOs said that members of the national police force beat or abused detainees and suspects and that prisoners generally were subject to degrading treatment. This was, in large part, due to the continued overcrowding of prisons. Some reports reported about officers using physical punishment and psychological abuse to mistreat prisoners.

Events in 2013
Human Rights Watch reported that the lack of capacity of the national police contributed to overall domestic insecurity, and that “oversight and accountability within the HNP remain weak, and investigations made by the Inspectorate General of the police into human rights abuses by police made little progress”. Gender-based violence continued constituting a widespread problem and obtaining accountability for sexual violence were related to several obstacles. In one high-profile case, a woman pressed charges against a former justice minister due to an alleged rape in 2012. The woman had to withdraw her criminal complaint as she subsequently reported receiving multiple death threats.

Events in 2015
The reported human rights violations taking place in 2015 included allegations of arbitrary and unlawful killings by government officials, accusations of use of force against protesters, overcrowding and poor sanitation in prisons, persistent pretrial detention, rape and violence against women and child abuse. The political instability continued and the weak democratic governance persisted to be one of the most serious impediments to human rights. In October, elections were delayed indefinitely due to allegations of fraud.

Events in 2016
2016 saw allegations against police and other government officials due to their alleged involvement in arbitrary or unlawful killings as on October 2016, a girl was shot and killed during a food distribution site in Dame-Marie. Haiti’s prisons were still severely overcrowded, characterised by inhumane conditions. The UN estimated that almost all inmates in Haiti’s national prison system have access to less than one square meter of space. UN found that the overcrowding is largely due to high numbers of arbitrary arrests and pretrial detainees.

Events in 2017
In 2017, the most serious human rights issues included allegations of arbitrary and unlawful killings by government officials, allegations of use of force against of detainees, inhumane prison conditions, a corrupt judicial system and physical attacks on journalists. Breaches of press and media freedom were reported across a variety of sources, and isolated incidents of actions against journalists by government officials were reported. Likewise, some journalists were reportedly subject to threats, harassment, and physical assault, allegedly because of their reporting. Government authorities were reported to be involved in some of these acts. Finally, in January, the presidential and legislative elections were postponed by the Provisional Electoral Council (CEP) following violent protests, where police reportedly had used force, in response to allegations of electoral fraud during the first rounds of elections in 2015.

Despite this catalogue of harm, the UK still deems it acceptable to sell weapons and arms to the Government of Haiti.  Human rights abuses continue.