Democratic Republic of Congo: Country overview
With an estimated population of 81 million, the DRC is the second largest country in Africa. Despite its vast amounts of natural resources, the majority of the population lives in extreme poverty, faced with constant political instability.  In essence, armed clashes and human rights violations have characterised the DRC for decades. Most recently, in 2016, a new conflict erupted in the Kasai region, partly because President Joseph Kabila postponed the expected elections. Since 2010, 19,000 UN peacekeepers have deployed in the country to protect civilians and facilitate stability.

As of 2018, the DRC has neither ratified nor signed the Arms Trade Treaty.

How many licences for the sale of arms to DRC has the UK issued between 2008 and 2017?
The number of approved military arms export licences has remained consistently low between 2008 to 2016. With a peak of 22 in 2011 and an average of eight approved per year in this period. However, in 2017, this rose sharply, when 143 licences were approved, over 17 times the average for the previous nine years; or, more than the cumulative amount that the UK had approved to DRC than in the last nine years. 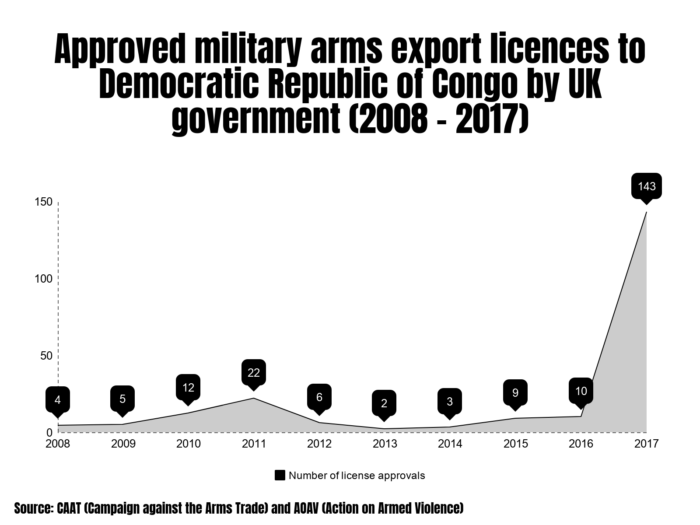 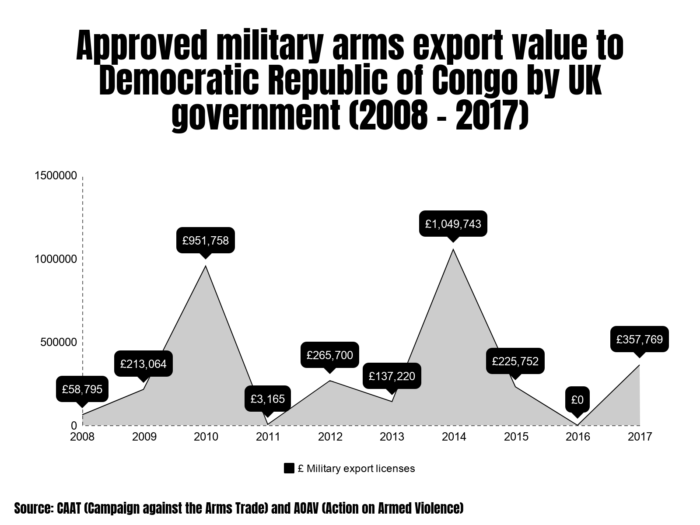 What are the top 10 types of arms export licences Britain is selling to the DRC?
Whilst the data given above is just for military exports (single-use), when you consider both military and dual-use exports (dual-licences are permits to control all the material, software and technology that can be used for civil purposes like humanitarian aid, but also for military goals) the top ten export items requiring licences are as below.
The most frequent type of equipment bought by DRC was that employing cryptography, which is a broad category but covers offensive cyber capabilities. The next highest is information security equipment and information security software, both again categories that give capabilities to a government to spy on citizenry and opponents. With a government like DRC’s, this is a significant concern.

Why should British citizens be concerned about arms sales?
From 2010 to 2017, human rights violations have been of significance in every single year in the Democratic Republic of the Congo. Such violations are usually a function of unfolding events: elections, protests, clashes between security forces and rebel groups. In this period, government forces have carried out unlawful killings, sexual violence, threats, torture, assassinations, arbitrary arrests, restrictions to press freedom, and recruitment of child soldiers, and the continued rise in human rights violations committed by the regime is deeply concerning. In the month of May 2016, the UN Joint Human Rights Office (JHRO) recorded that state agents were responsible for 67% of all human rights violations,  while 33% was committed by armed groups.

It was mainly the Congolese National Police (PNC) who was committing the state-sponsored violations. However, some of them were also attributable to the DRC army (FARDC), who reportedly violated the right to liberty and security of the person.

The DRC has been under a variety of arms embargoes since the early 1990s, and as in line with the UN’s recommendation to “ensure that no direct or indirect assistance, especially military or financial assistance, is given to the movements and armed groups present in the Democratic Republic of the Congo”, it is currently only transfer of arms to the regime that is permitted. However, the continued easy availability of arms and ammunition has sustained constant and systematic violations of international human rights and humanitarian law committed by all parties to the conflict, and the proliferation of arms in the DRC is according to Amnesty “the result of many years of irresponsible deliveries to government forces (…)”.

What has the British government said about these concerns?
The FCO has been outspoken in denouncing the role of state actors in human rights abuses, abuses that could have been facilitated by arms sold by the UK.

In 2016, the FCO wrote: “The human rights situation in the DRC worsened in the first 6 months of 2016 compared to the previous period. Abuses and violations of human rights continued at a higher rate throughout the reporting period, particularly by state agents. The issue of an arrest warrant for a Presidential candidate, Moise Katumbi, was deeply concerning and emblematic of the growing instrumentalisation of justice in the DRC. The main state perpetrators of human rights violations were the PNC, the intelligence agency (ANR) and FARDC. The main non-state perpetrators of human rights abuses were armed groups, principally in the east of the country.”.

The UK invited the DRC the annual British arms fair in 2015.

What evidence is there of human rights abuses that the DRC government have committed since 2010?

Events in 2010
2010 saw many unlawful killings committed by both government forces and armed groups. In April for instance, national army members unlawfully killed around 100 civilians, hereof mainly women and children, in a refugee camp at Shalio, Walikale territory, North-Kivu province.

Also, by 2010, an estimated total of 3,000-4,000 children was recruited into armed groups associated with the national army, also called FARDC. Sexual violence was reported several times, such as the reported 16 cases of rape by government forces, including a case of gang rape by National Police officers, during fighting in Mbandaka, Equateur province.

Events in 2011
Together with other security forces, FARDC and the police (PNC) were reportedly accountable for several human rights violations, counting summary executions, mass rapes, arbitrary and illegal arrests and detentions, torture, extortion, forced labour and looting. For instance, government soldiers attacked civilians while fighting in the north against the Lord’s Resistance Army (LRA). The worst attacks were against the Mbororo nomadic cattle herders who frequently traverse the border between Congo and the Central African Republic (CAR). At least 35 Mbororo women and girls were raped. Government soldiers also alelgedly beat and arbitrarily detained Mbororo men and pillaged their cattle.

Events in 2012
Human Rights Watch reported that at least 57 opposition party supporters or suspected supporters were killed by security forces—mostly Kabila’s Republican Guard between November 26 and December 31. Also, attacks against political activists and peaceful demonstrators continued in 2012. In October, 14 opposition members where for instance detained and reportedly badly beaten up by government security forces without being brought before a court.

Events in 2013
The regime forces’ vast violations of human rights are continuously being reported. Security forces deliberately killed civilians during operations against Mai Mai fighters in Katanga province. Also, as the army moved into territories previously controlled by the M23, soldiers reported systematically continued to rape women and girls.

Events in 2014
In the course of “Operation Likofi” (between November 2013 and February 2014) in Kinshasa, the Congolese police extrajudicially executed at least 51 young men and boys and forcibly disappeared 33 others. Uninformed police reportedly dragged some of the victims out of their houses at night and shot them dead before taking their bodies away.

Events in 2015
On March 19, the government admitted burying 421 bodies in a mass grave in Maluku, a rural area about 80 kilometres from Kinshasa. The government said it was a ‘normal procedure’ for poor families who cannot afford official burial sites. In January, security forces brutally suppressed demonstrations by those opposed to proposed changes to the electoral law requiring a national census before national elections could be held, effectively extending Kabila’s term for several years. Police and Republican Guard soldiers fatally shot at least 38 protesters in Kinshasa and 5 in Goma, in eastern Congo. Women and children were among the victims.

Events in 2016
Followed by Kabila’s decision to delay elections, violent clashes in many parts of the DRC took place, and security forces reportedly deployed heavily throughout major cities. In Kinshasa, 50 people were reportedly killed and hundreds more are arrested. Rising political tensions in 2016 created an increase in human rights violations. In fact, between January and June 2017, the UN documented2,822 violations in the DRC. This showed a remarkable increase compared to the same period the previous year (2.343 between January and June 2016).

Despite this catalogue of abuse, the UK still deems it acceptable to sell weapons and arms to the Government of the DRC.  Human rights abuses continue. For more from this investigation please go here.