Over the past year, Action on Armed Violence (AOAV) has been investigating the UK arms trade. The UK government states that ‘the UK is one of the world’s largest exporters of arms’, but it is a trade often hidden in the shadows. So, when Prime Minister Theresa May spoke at the annual World Economic Forum at Davos in 2017 about a ‘truly global Britain’, the UK’s export of arms was implicitly seen as part of that business model. And, in a world where the UK’s future trade hangs in the Brexit balance, there is growing concern that the imperatives of profit might usurp that of protecting human rights.

This report from AOAV offers up an examination of the UK’s arms trade and focuses on the question: to what degree have Britain’s politicians approved the arming of governments and countries despite simultaneously condemning those states for human rights abuses?

The UK’s arms trade to the FCO’s ‘Human Rights Priority Countries’ list
The Foreign and Commonwealth Office (FCO) publishes – every year – a list of countries of concern. Such a list is designed ‘to defend human rights and promote democracy worldwide’, naming what the government terms ‘Human Rights Priority Countries’ (HRPCs). The ambition behind such a list is for the government to offer ‘positive engagement that contributes to addressing human rights concerns.’

But despite compiling such a list, and claiming to do so to defend human rights, the UK government has also, between 2008 and 2017, almost universally approved military arms exports to the countries that appear on them.

Over a decade, arms exports have been granted to 29 of the 30 countries on its current (2017) human rights ‘priority countries list’ (all with the exception of North Korea).

Indeed, nearly a third (30.89%) of the value of all the UK’s arms export approvals over a decade were to those countries on the FCO’s 2017 human rights ‘priority countries list’. While, on average between 2008 and 2017, £1.2 billion worth of arms were sold to members of the current 30 ‘priorities countries list’, constituting an average of 2,442 arms licenses per annum.

It might seem that appearing on such a list – where lengthy catalogues of human rights abuses are identified – might deter the British Government from selling military equipment there. But this is not so. Even on the Department for International Trade’s Defence and Security Organisation ‘core markets for 2017-18’ for defence and security opportunities, three countries that are also on the FCO’s ‘Priority Countries’ are named as core markets: Bahrain, Colombia and Saudi Arabia.

For the sake of this investigation, AOAV focused on the 2017 published list as all countries on this list have been consistently named since 2015. Since 2008, five countries have appeared on the FCO list but have since dropped off – Cuba, Belarus, Chad, Vietnam and Fiji. We did not analyse these. Furthermore, between 2008 and 2014, Bangladesh, Burundi, Egypt, Maldives, Venezuela, Central African Republic (until 2012), Eritrea (until 2009), Libya (until 2009), South Sudan (until 2009), Yemen (until 2008) and Sri Lanka (until 2008) were not listed on the top 30, but are on the list today. AOAV included all of these 11 nations in our analysis as there are concerns of human rights abuses in these countries that span the entire decade.

Controversially, perhaps, the FCO list does not include Turkey, Mexico, Qatar, UAE, Honduras, Haiti or the Philippines – countries with clear human rights abuses yet where the UK still maintains an arms trade relationship.

In total, 19 countries of the 30 priority countries currently have also had weapons sales restrictions imposed upon them either by the European Union or the United Nations (sometimes both). These are Central African Republic, China, DRC, Egypt, Eritrea, Iran, Iraq, Libya, Myanmar, North Korea, Russia, Somalia, South Sudan, Sudan, Syria, Uzbekistan, Venezuela, Yemen and Zimbabwe.  This does not mean that the UK government has explicitly violated 18 trade embargoes (there have been no sales to North Korea), but it does raise concerns about the sort of countries that the UK government is willing to export arms to. Such concerns, though, appear to have been largely dismissed by the government.

‘The government takes its export control responsibilities extremely seriously and operates one of the most robust defence export control regimes in the world’, said an FCO spokesman to The Guardian after the government was criticised for its arms export to Venezuela (one of the FCO’s priority countries) before an EU embargo in November 2017.

What does the data reveal regarding military exports to countries with human rights abuses?
From 2008 to 2017, UK companies were granted £12 billion worth of military controlled arms exports licenses to 29 of the FCO’s 30 human rights priority countries (£12,038,887,512).

In total, some 26,268 licenses were granted over that period to these places. 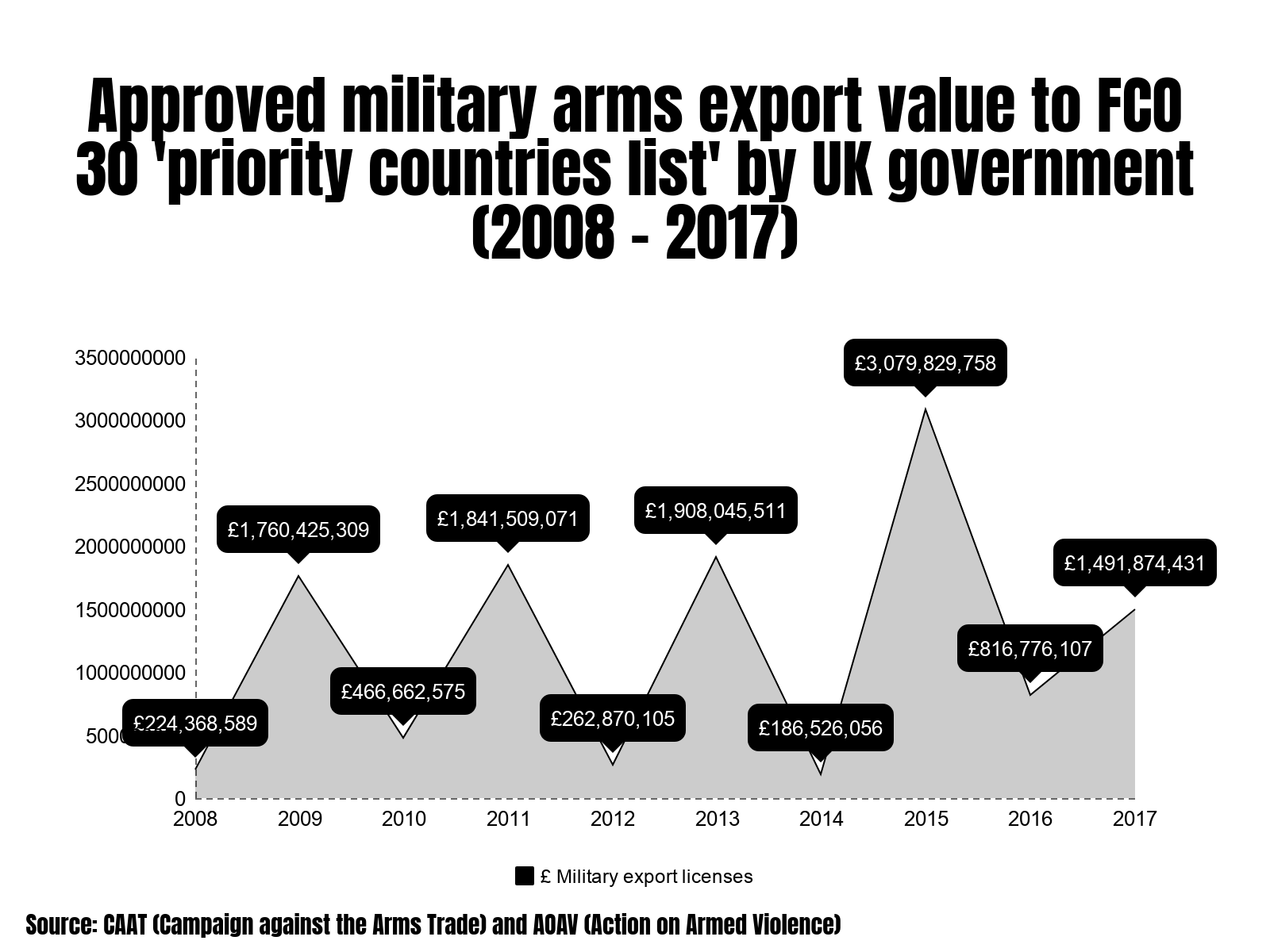 Across a decade, Saudi Arabia constitutes 86% of the total value of arms sales to those on the FCO’s ‘Priority Countries List’. Nonetheless, six other countries have had over £100 million of approved military export licenses from the FCO’s ‘priorities countries list’ – Israel, Egypt, China, Pakistan, Afghanistan and Russia. 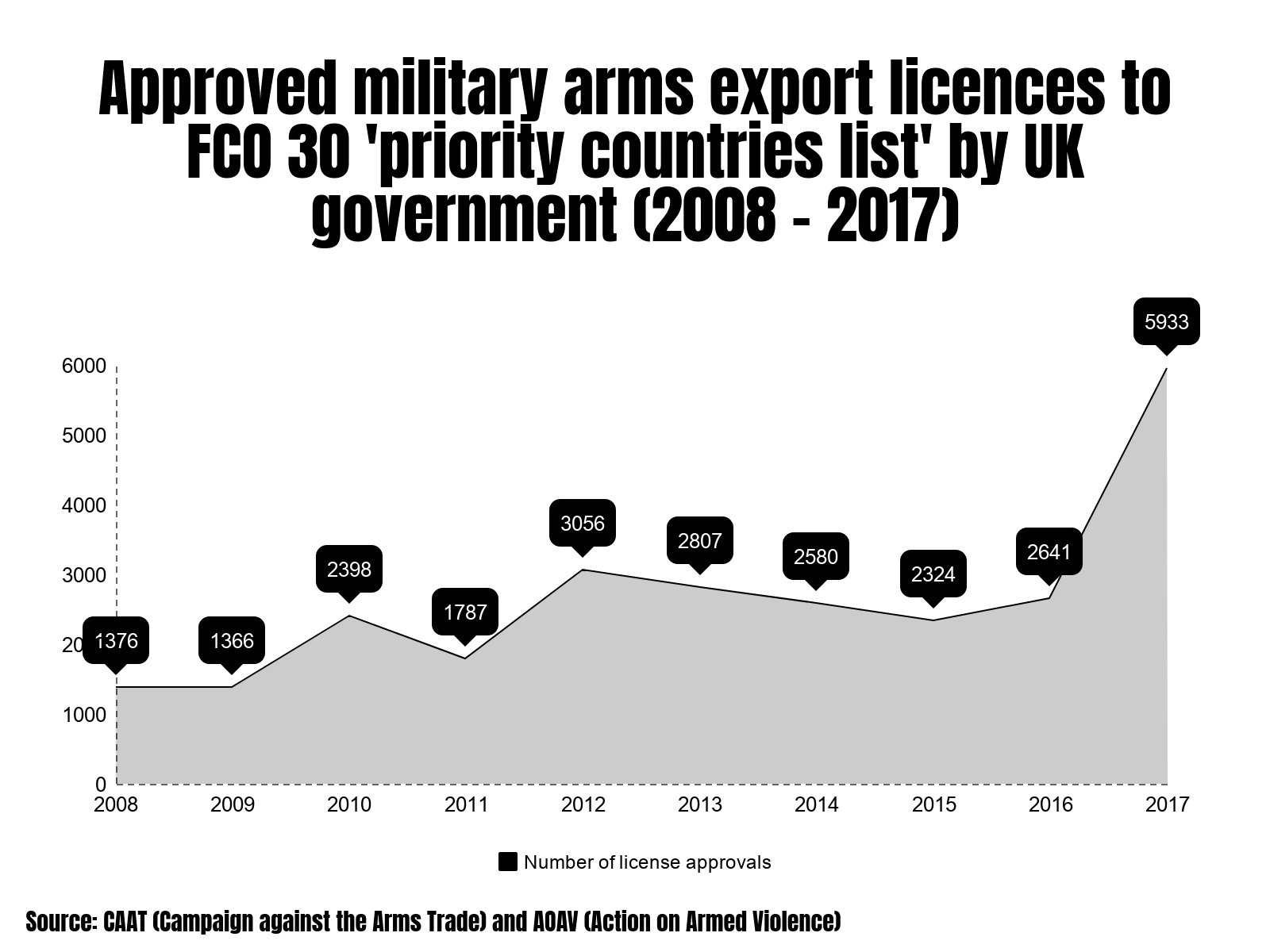 What does a break-down of total licenses for military exports reveal?
The following points of note were revealed in the analysis of the 26,268 licenses granted between 2008 and 2017.

If you exclude Saudi Arabia, are such arms exports to countries of concern increasing or decreasing?
Given how great the UK’s arms exports relationship with Saudi Arabia is, it is of benefit to look at the export data excluding Saudi Arabia, to see what patterns emerge. 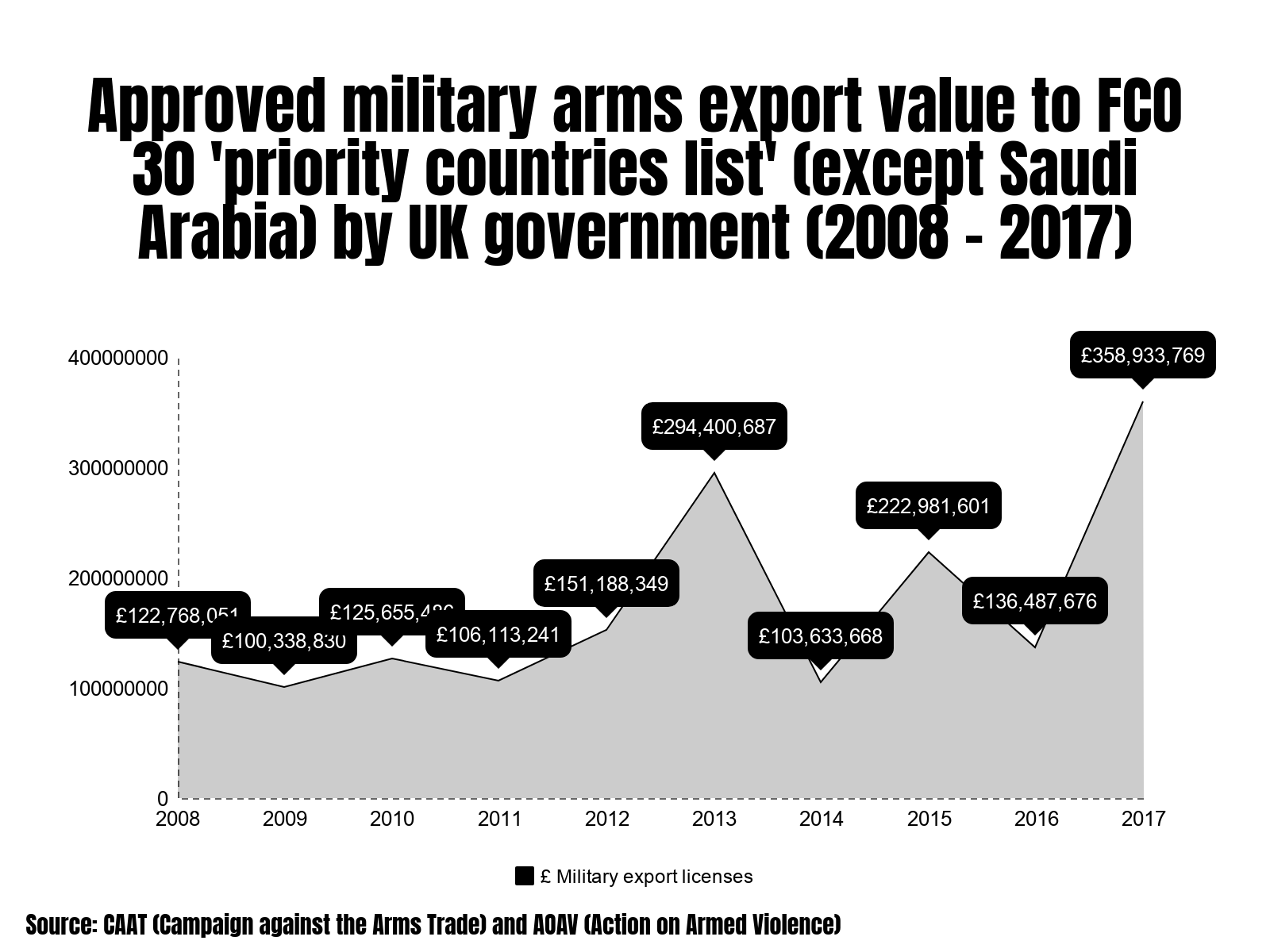 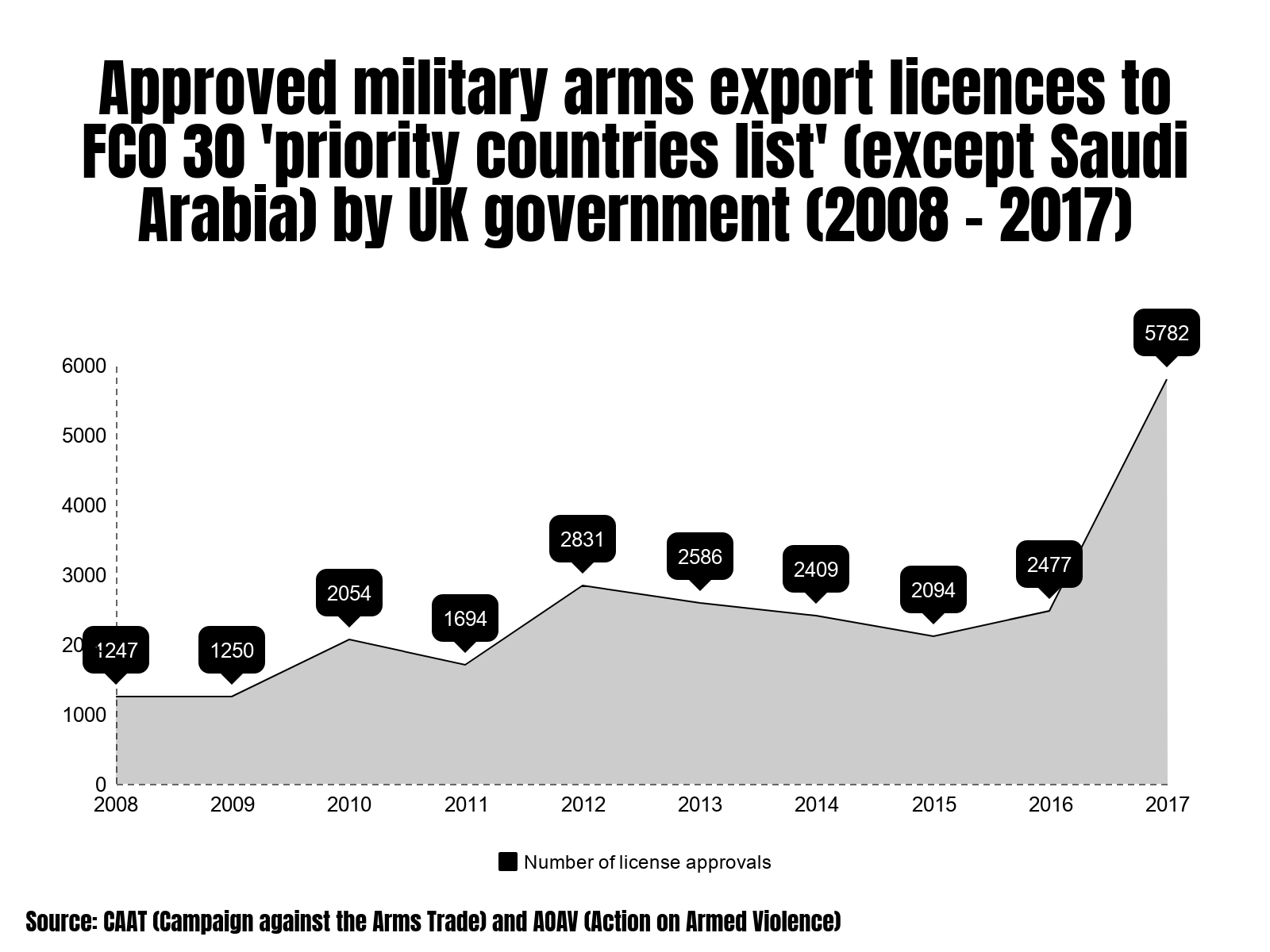 This data shows that – even without the billion pound deals that Saudi Arabia generates – there are still substantial deals done with other countries where human rights abuses are a major concern.

What about military exports since the Brexit referendum?
In 2016, the year of the Brexit referendum and Theresa May’s government coming into power, £816,776,107 worth of military licenses were granted to countries on the Human Rights Priority list.  In 2017, this rose 82% to £1,491,874,431. In particular, British military export sales rose dramatically to 12 of the FCO’s 30 countries of concern. This included a rise in sales to:

To some degree, this surge in exports raises concerns about possible post-Brexit intentions of the British government – to sell to whoever comes calling, regardless of their respect for human rights.

What does the data reveal regarding dual-license exports?
Dual-licenses are permits to control all the export of material, software and technology that can be used for civil purposes like humanitarian aid, but also for military goals, according to a European Council Regulation. Therefore, any material that can be used in the production of military goods has to be controlled. Between 2008 and 2017, the UK government has approved licenses to all 30 ‘countries of concern’ for so-called ‘dual-use’ items (though these items could be used either for civilian or military use).

Dual-use items and surveillance
Of note, many of these dual-use exports appear to be equipment related to surveillance – including items such as ‘information security equipment’, ‘equipment employing cryptography’, ‘imaging cameras’ and ‘cryptographic software’. Obviously, some of these could be used for internal security measures (i.e to stop people stealing state secrets), but we do not know if some of this technology was for reverse engineering (i.e. to hack into other people’s cryptographic protection).

In total, some 5,082 licenses were found in the top 10 dual-use items of each country that touched upon the digital sphere of surveillance and monitoring. These included sales to countries with well-known monitoring abuses – such as China, Israel, Russia, Saudi Arabia, Zimbabwe, Bahrain, Syria, Myanmar and North Korea (for which 6 licenses for imaging cameras were granted).

Of note are the following:

– China: 1,234 licenses for imaging cameras have been granted to China. In China, 644 licences – the second highest number approved – were granted for ‘Equipment employing cryptography’. While ‘Information security equipment’ was the 6th most approved arms export license with 318 approved since 2008. 96% of China’s arms export purchases involve dual-use licenses, worth a total value of £4.8 billion, including hundreds of imaging and instrumentation cameras, cryptography equipment and software, lasers, and information security equipment.
– Russia: 129 licenses have been granted to Russia for ‘information security equipment’, while 191 licenses for imaging cameras have also been granted. In total, from 2008 to 2017, £1.1 billion worth of software and materials which might have both civilian and military use were sold to Russia by the UK. The 9th largest export licence to Russia from the UK in the last decade has been ‘Equipment employing cryptography’, with 33 licenses granted. ‘Information security equipment’ was 3rd, with 131 licenses approved.
– Turkmenistan: the UK’s leading export licence to Turkmenistan was ‘Equipment employing cryptography’. HRW has denounced Berdymukhamedov’s government for using technology in monitoring and blocking mobile and satellite communications. 96% of the total value exported to Turkmenistan was surveillance equipment and software. It is impossible to know if the systems sold to the country have been instrumental in such abuses.
– Zimbabwe: 70 licenses for ‘Equipment employing cryptography’ were granted to Zimbabwe in the last decade.
– Syria: 18 licenses for ‘Cryptographic software’ were granted to Syria in the last decade.
– Myanmar: 2 licenses for ‘imaging cameras’ have been granted to Myanmar.

Again, it is impossible to say what such surveillance and digital protection software and hardware may be used for and it is possible every export is for benign purposes, but it raises questions– as the battlefield shifts from war-zones to digital landscapes – regarding how governments may be using new UK-created technology to impose their iron will.

Where is this data from and what caveats apply?
These figures are from the Strategic Export Controls database of the UK Department for Trade, as captured by the Campaign Against Arms Trade. It must be noted that a small number of licences were later revoked – however, the UK government does not provide the data for how much of the goods were exported before the license was revoked.

It is important to note that in some instances – such as occasional exports of military items to places such as Syria or Myanmar – exports might be being sent to international organisations such as peace keepers, and are not necessarily always to the state in question.